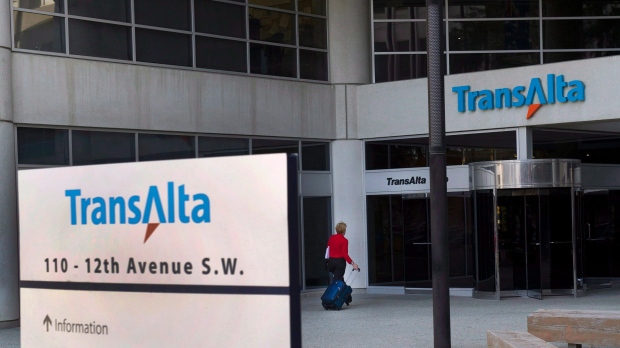 A woman walks towards the entrance of the TransAlta headquarters building in Calgary, on Tuesday, April 29, 2014. (Larry MacDougal / THE CANADIAN PRESS)
CALGARY -

TransAlta Corp. has taken another step in its goal of becoming carbon neutral by converting the second of three planned coal-to-gas conversions at its Alberta Thermal power generation facilities near Wabamun.

The conversion of Keephills Unit 2 to natural gas is part of the Calgary company's plan to entirely generate clean energy in Alberta by the end of the year.

TransAlta has said it wants to reduce its annual greenhouse gas emissions by 60 per cent, or 19.7 million tonnes by 2030 over 2015 levels and achieve carbon neutrality by 2050.

Chief executive John Kousinioris says the latest conversion maintains its current generation capacity and reduces carbon dioxide emissions by more than half to about 0.51 tonnes CO2e per MWh.

The Keephills conversion cost $31.5 million while another $64.7 million was spent on system upgrades, gas infrastructure and maintenance projects.

It was the second conversion project after Sundance Unit 6 was converted in February. Keephills Unit 3 will be converted later this year.

This report by The Canadian Press was first published July 19, 2021

Lava from Spanish volcano heads toward sea; no injuries, 5,000 evacuated

Lava continued to flow slowly from a volcano that erupted in Spain's Canary Islands off northwest Africa, but the head of the regional government said Monday he expects no injuries to people in the area after about 5,000 were evacuated.