When the producers of the shot-in-southern Alberta film Ghostbusters: Afterlife needed an expert in seismology they turned to David Eaton, a University of Calgary professor who specializes in man-made activities that make the ground shake.

It all started with an email that Eaton almost ignored in May 2019 because he was on vacation and said it didn't look like everything else in his inbox. But he did reply and a month later he met with movie producer Jason Reitman to talk about some plot ideas for the feature involving earthquakes. The meeting took place in Eaton's U of C Earth Sciences office on a Sunday morning when the campus was deserted.

"The overarching plotline, of course is not founded in science," said Eaton. "But yeah, I was impressed that Jason Reitman really wanted to try to build a little bit of backstory that was rooted in understanding of these phenomena."

The two talked extensively and Eaton drew out some seismology concepts on his whiteboard.

"I actually was just sketching on my whiteboard and some of the sketches that I made actually found their way into scenes in the movie," said Eaton. "Which you know really tickled me to see that happening."

While much of the movie was shot in southern Alberta, it's actually based in a small town in Oklahoma. Eaton has knowledge of the area and shared that with Reitman.

"My research has focused on induced earthquakes and Jason Reitman was not aware that Oklahoma had experienced a surge in induced earthquake activity," he said. "It actually made Oklahoma more seismically active than California on a per square kilometre basis for several years." 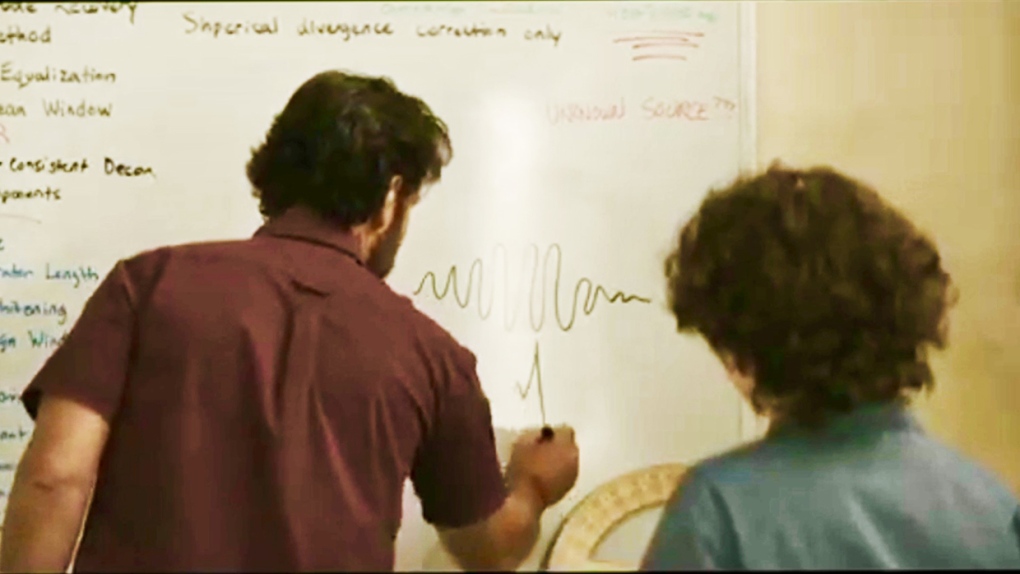 WHEN THE GROUND STARTS TO SHAKE

The two discussed how to pinpoint the origin of an earthquake and what someone should do when the ground starts to shake to keep safe. Both made it into the plot line for the movie.

Eaton took his family to the theatre to watch the show and was impressed his suggestions made it on film. He received a small honorarium for his work and his name appears in the credits.

"We stuck it out because if you're watching the credits, you have to wait to the very, very end. My name showed up there in the credits," said Eaton. "So I think we were the last ones left in the theatre at that time, but we stuck it out."

Eaton teaches three classes a week to students from all over the world. He's internationally renowned for his cutting-edge research on earthquakes induced by hydraulic fracturing and has travelled the world for his research. But now he laughs because many recognize him for his consulting work on Ghostbusters: Afterlife and he'd likely do it again if asked.

"If the opportunity arose, I think it was kind of fun to see behind the scenes at the way the whole process works and the thought process and putting together a screenplay for a movie like that, I thought it was kind of fun," he said.

Canada's transport minister is speaking out about the 'unacceptable issues' that continue to result in significant delays. He says the federal government has done everything in its control to fix the issue.

Canada has signed an agreement to upgrade the NATO battlegroup it leads in Latvia to a brigade, though the government says it's too early to say whether that will entail deploying additional Canadian troops.

Through the use of MRI technology and spearheaded by researchers at Western University, the cause of long COVID symptoms have been identified for the first time.

A proposed $150-million settlement with Purdue Pharma Canada covering all provinces and territories has been reached for the recovery of health-care costs related to the sale and marketing of opioid-based pain medication.