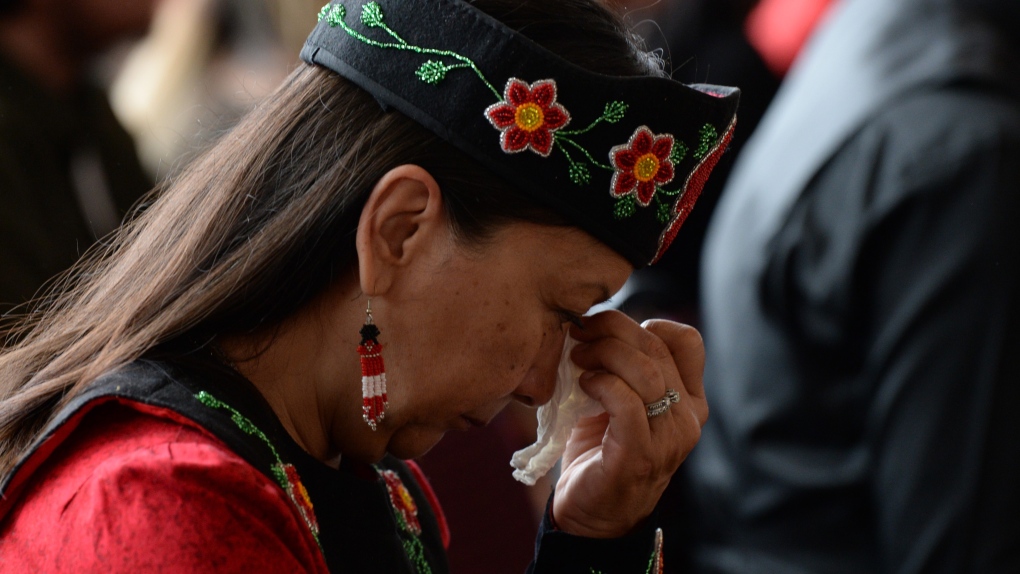 A woman shows her emotions as she listens to speakers during ceremonies marking the release of the Missing and Murdered Indigenous Women report in Gatineau, Monday June 3, 2019. THE CANADIAN PRESS/Adrian Wyld

CALGARY -- The loved ones of many Indigenous women and girls, many of which are homicide victims, gathered in Calgary for nationwide movement Sunday.

Calgary's event began with drumming and singing at Third Street and Stephen Avenue S.W., after which participants marched to City Hall Plaza for a noon gathering.

Organizers say the city's ceremony is one of more than 300 vigils taking place across Canada and the world to remember the many women and girls who have lost their lives due to violence.

"We gather to bring awareness for increased safety, justice, recognition of our Human Rights and to support the public call for the announced national inquiry. Our goal and wish to initiate is to initiate open dialogue with our governments, to take action and reduce the alarming rates of violence of against Indigenous women," the group says in a release.

"We are over-represented and at greater risk than the national average of homicide and violence."

In a public statement released Sunday, Minister of Indigenous Relations Rick Wilson and Minister of Culture, Multiculturalism and Status of Women Leela Sharon Aheer said they are "proud to declare Oct. 4 Sisters in Spirit Day."

"Our hearts go out to the many families and friends across Alberta and Canada who have suffered unimaginable losses. We stand with you against violence in the names of your loved ones, whose lives are forever in our memories," the statement read. "Alberta’s government hears your calls for justice for your mothers, sisters, daughters, aunts and their families. We know we have a role to play in preventing violence against Indigenous women and girls, and we are taking action."

According to public data, there are more than 1,200 missing and murdered Indigenous women in Canada.