'We all love what we do:' Cirque du Soleil to perform in Lethbridge 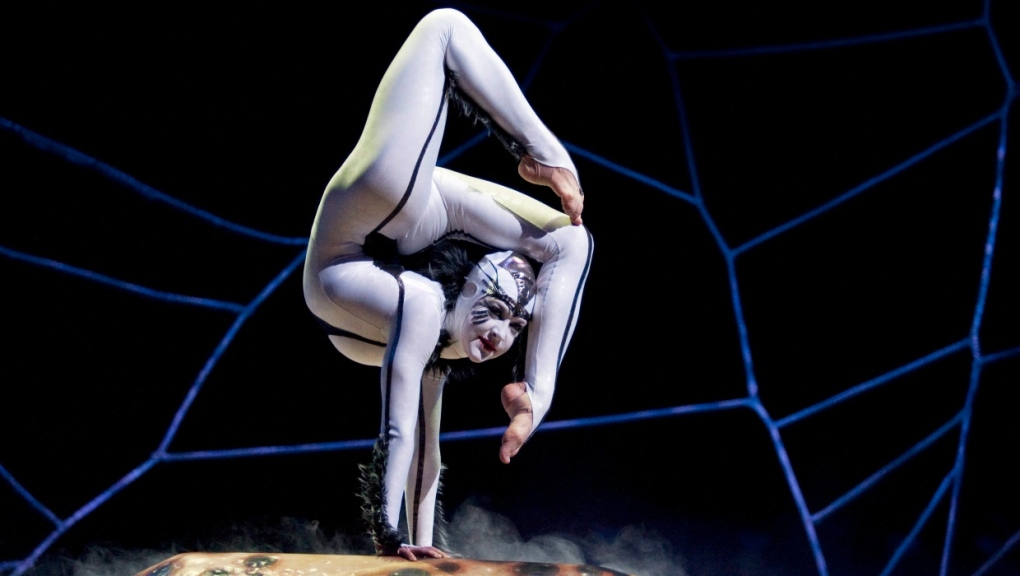 A contortionist performs during Cirque du Soleil's OVO — a word that means egg in Portuguese — in Montreal on Wednesday, May 6, 2009. (THE CANADIAN PRESS/Paul Chiasson)

Performers with Cirque du Soleil are preparing for the company's fist show in Lethbridge since 2018.

Those taking in the OVO at the Enmax Centre this Friday and Saturday can expect vibrant-coloured costumes, riveting acrobatics and musical performances, but there’s a lot more that goes on behind-the-scenes than one might think.

Friday night’s performance will be the first arena show the group has done in western Canada since 2020.

Preparations for the performance are well underway, but what you may not know is how big the production truly is.

"That is what it takes to bring OVO to Alberta, and to have the stage, the costumes, the offices, the gym, and the training equipment. Everything we need to bring this massive production from city to city."

Each Cirque du Soliel show has its own theme.

This tour is called OVO – which means egg in Portuguese – and the theme is insects.

"Through years of research and costume design and set design, it became what it is now with a colony of 52 acrobats that are portraying scarabs, crickets, spiders and butterflies and everything," described Mallet.

"That was the original idea, to bring you into this ecosystem."

The travelling crew consists of 100 people — ­more than half of whom are artists from 25 different countries.

Trampoline artist Matthew Piva is from Australia and has been spending the last several days adjusting to the 16-hour time difference in order to perform at the highest level possible.

"It’s quite dangerous, what we do, so if we don’t focus it can go a bit wrong," he said.

"As soon as we get here, our minds are switched on, and then when we go home we can relax and have our down time. But here, we switch on right away. Coffee helps a bit with that."

Piva says he and the rest of the crew also focus on eating healthy while on the road.

"Every show we have a catering team that cooks for us," he said.

"We have a selection of every vegetable we could ever need and they cook us two separate meals a day, which is a buffet, so we can eat as much as we want.

"I try and eat a lot of vegetables, and I just try to eat a lot to try and prepare my body."

Kilian Mongey is an acrobat who will be playing a cricket in the upcoming OVO tour.

He’s been involved in gymnastics since he was three years old, and now at the age of 27, he says he still can’t believe his childhood dream has come true.

"First time I saw a Cirque show I was 11, back in Paris – my hometown," said Mongey.

"I was already doing gymnastics and tumbling, and I was like ‘Okay, this is exactly what I want to do.' It’s amazing. Every night, I get to accomplish my dream that is to be on stage."

But that dream Mongey speaks of isn’t one he’ll be waking up from anytime soon.

He says he plans on sticking with the company for many years to come.

"I love bringing joy to people," he said.

"This is my second family, and we all love what we do."

The annual gathering of the Assembly of First Nations is being held this week in Vancouver under a cloud of criticism from its national chief, who has been suspended and denied entry to the meeting.

A shooter fired on an Independence Day parade from a rooftop in suburban Chicago, spraying the crowd with gunshots initially mistaken for fireworks before hundreds of panicked revellers of all ages fled in terror. At least six people were killed and at least 30 wounded.

Travelling soon? Here's how to have a stress-free airport experience

A day after Russian President Vladimir Putin declared victory in seizing an eastern Ukraine province essential to his wartime aims, a city in the path of Moscow's offensive came under sustained bombardment, its mayor said Tuesday.

Saving for retirement is becoming out of reach for young Canadians

A new U.S. study shows that in high-trust neighbourhoods, those with a larger dog population had robbery rates that were almost two-thirds lower and murder rates that were cut in half.

Climate change protesters targeted a copy of Leonardo da Vinci's 'The Last Supper' at London's Royal Academy of Arts Tuesday, gluing themselves to the painting's frame and spray-painting 'No New Oil' next to it.