A Lethbridge diner has a new helper but it’s not your standard employee.

El Greco Cuisine recently welcomed a robot to join their staff and its all guests can talk about.

Bella the robot helps serve, clean and interact with customers and it’s the first of its kind in the city.

So far she’s been a massive addition at the diner.

“Her job is to run plates, push the buttons, run her tables, and also say 'thank you' and 'bye' to the customers,” said El Greco Cuisine manager Fani Stoupa.

“I can also send her back to a table and we can take all the plates away and transfer them to the kitchen.”

Having Bella around has made the job much easier for other staff members. Her best quality might be the fact that she returns the dirty dishes because that ultimately helps protect the human servers against injuries that are prevalent in the food service industry.

“We don't have to go back and forth too many times,” explained Stoupa.

“We just load her, she runs to the table and if someone needs something, I’m there always too.”

A big reason for the addition of Bella was the fact Stoupa was having trouble finding and keeping staff, something she says was a direct result of the pandemic.

“Nobody wants to work and that’s the problem,” said Stoupa.

“Some people would come just for a shift and then leave and it's like that everywhere.”

Guests at the diner on Thursday said they’ve never seen anything quite like a robot server, and that’s exactly why they decided to come see what all the hype was about.

“You just don't expect this, like, even in Calgary I think it’s still something quite novel,” said Faye Knitel.

“People always like new devices and new things so why not.” 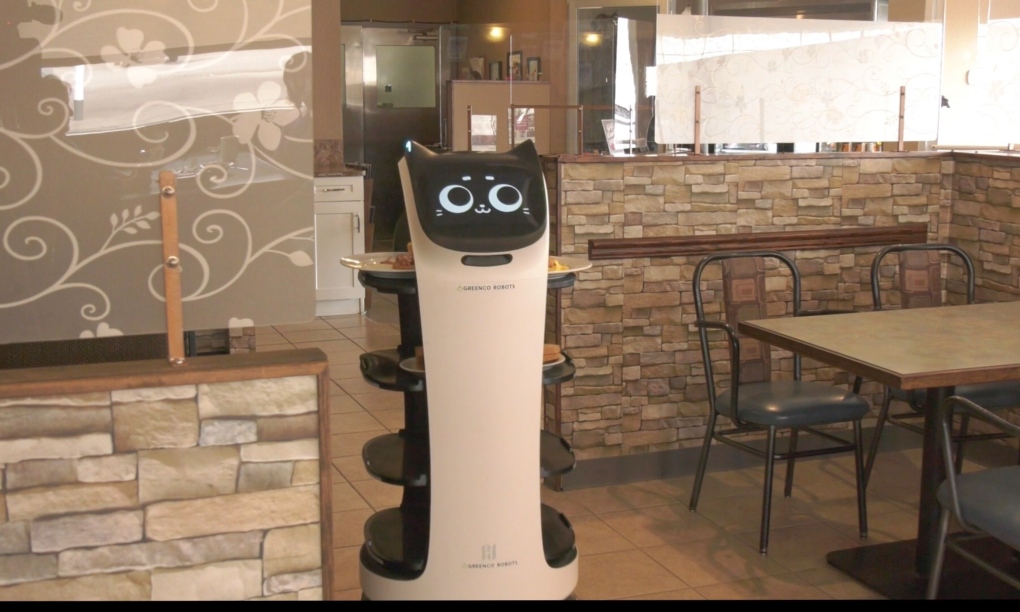 Bella, a robot server, is the newest staff member at El Greco Cuisine in Lethbridge.

“We like this place and the food is always good, but that was kind of an additional incentive to come today, like, let's go see this robot,” said Bernice Lambert.

Bella was manufactured by GreenCo Robots in Edmonton and the company's president says we can expect to see more of them in restaurants across Canada and other industries in the near future.

“Initially they were designed for the restaurant environment but they have also been used, for example, in golf clubhouses, hotels, banquet halls and super markets,” said GreenCo Robots president Liang Yu.

“So basically it’s a good novelty item, but at the same time it also helps on efficiency.”

But Yu does not see these robots taking over industries, in fact he sees it as beneficial for humans.

“They are not designed to replace humans,” said Yu.

“We believe that robots are invented by humans so that humans don’t have to be robots.”

The price tag on a BellaBot is steep.

According to the manager at El Greco, the robot costs close to the price of a new car, but says that's still about half of what the annual salary of a human would cost at her diner.