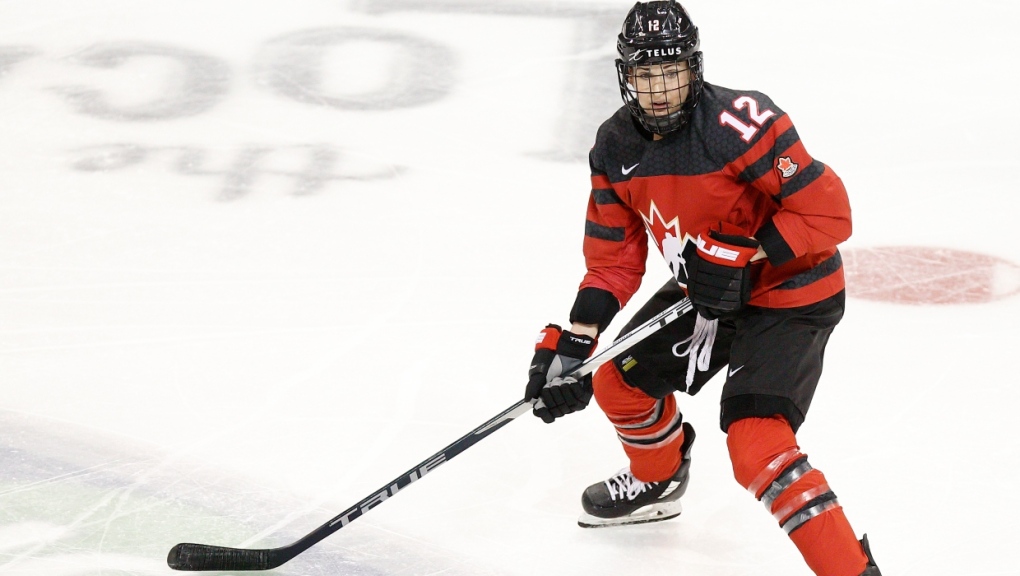 Meaghan Mikkelson #12 of team Canada skates with the puck against team USA during a Rivalry Series game at the Save-on-Foods Memorial Centre on February 3rd, 2020 in Victoria, British Columbia. (Photo by Kevin Light/Getty Images)
CALGARY -

The 36-year-old from St. Albert, Alta., says she accepts what her recovering left knee can give her each day.

When Mikkelson heads to her Calgary home, the demands of two children under the age of six distract her from pondering whether that knee will allow her to play hockey for Canada in an Olympic Games for a fourth time in her career.

A fluid skater and strong defender during her 14 years on the national team, Mikkelson won Olympic gold in 2010 and 2014, as well as silver in 2018.

She played in the 2014 final despite a broken hand, and assisted on Canada's first goal of that game.

Mikkelson was the oldest player invited to compete for a berth on Canada's 2022 Olympic squad starting this summer.

She suffered widespread ligament damage May 29 during a Dream Gap Tour game in Calgary when she collided at the backboards with defender Renata Fast in a footrace for the puck.

Mikkelson underwent surgery June 14. She's been back on skates since Oct. 1.

She's yet to practise with Canadian teammates already playing the games that serve as evaluation for the Olympic roster.

"I've been through two pregnancies, two births and coming back from both of those, I know my body is really strong and has always been very good at healing," Mikkelson told The Canadian Press.

"I'm skating. That's the biggest thing. That's step number one. Handling pucks, shooting, and similar to the off-ice rehab, just moving through progressions in a way that makes sense."

Hockey Canada will name its 23-player Olympic women's roster before the December holiday break in about 10 weeks.

With the three goaltenders already selected, six skaters will be released. The clock is ticking on Mikkelson to get into games and prove herself against eight other invited defenders.

"I feel it, but I don't feel it," she said. "I'm just so focused on making gains and progress every single day, and focusing on doing the things that I can control. How my knee responds, selection process, those are things I can't control.

"I'm a mother of two kids so literally all of my energy right now is going towards my rehab and my kids. Anything that I would worry about that is out of my control, I just don't have the capacity to do."

Gina Kingsbury, Hockey Canada's director of women's hockey operations, is firm on the timing of the Olympic roster reveal.

"It's important for us to name that team in that time frame,'' said Kingsbury, who was Mikkelson's Olympic teammate in 2010.

"There needs to be an adjustment period for the athletes that are named to the team to come together and get ready and prepare for the Olympic Games."

Mikkelson has time, but there is a deadline.

"Hopefully, fingers crossed, we'll get to see her in a game prior to making those decisions," Kingsbury said. "I know she's done everything in her power to be back. A Meaghan Mikkelson healthy is definitely an asset to us.

"From the get-go, we said if someone can pull this off it would be her. Will she be back or not is, I guess, a waiting game."

Mikkelson and husband Scott Reid, a former pro goaltender, held a social media contest to help them name son Calder when he was born in 2015. Daughter Berkley arrived just over three years later.

Mikkelson is the daughter of Bill Mikkelson, who is an original New York Islander from 1972-73.

His connections to that NHL club provided his daughter a valuable tool during her rehabilitation. She's consulted with Islanders captain Anders Lee, who suffered a torn ACL in March.

"Right before I had surgery, I saw he was back on the ice two and a half months after he'd had surgery," Mikkelson said. "I was like 'this is incredible. I need to talk to this guy.

"I've been in contact with him, spoken over the phone a number of times. He's been great texting if I ever have any questions.

"One thing he talked about was just focusing on the process. If you can do A, go to B and if you can do B, go to C. Just listen to your body.

Mikkelson has played for Canada in seven world championships and won gold in 2012. She's compiled 15 goals and 34 assists in 108 career games.

She watched from the arena seats when Canada edged the United States 3-2 in overtime Aug. 31 in Calgary, and claimed its first world title in almost a decade.

"I was in tears because I was so happy that we won," she said. "It was inspiring for me and motivating for me to want to get back to that group.

"A team that has that kind of chemistry, that has that much fun, that works that hard and is that talented, you just want to be a part of it."

This report by The Canadian Press was first published Oct. 15, 2021.