Wait times for elective surgeries in Canada have improved compared to the start of the pandemic but a new study shows Albertans are still facing significant delays for knee and hip replacements.

The study by the Canadian Institute for Health Information (CIHI) looked at data across the country between April 2020 and September 2021 and found while health care systems are rebounding across the country from the impacts from COVID-19, they have for the most part yet to return to pre-pandemic levels.

Fifty-nine percent of Albertans waiting for a hip replacement received one within the recommended six-month timeframe given by a surgeon, compared to 65 per cent nationally.

CIHI's percentage of patients treated in Alberta within benchmark, 2021. 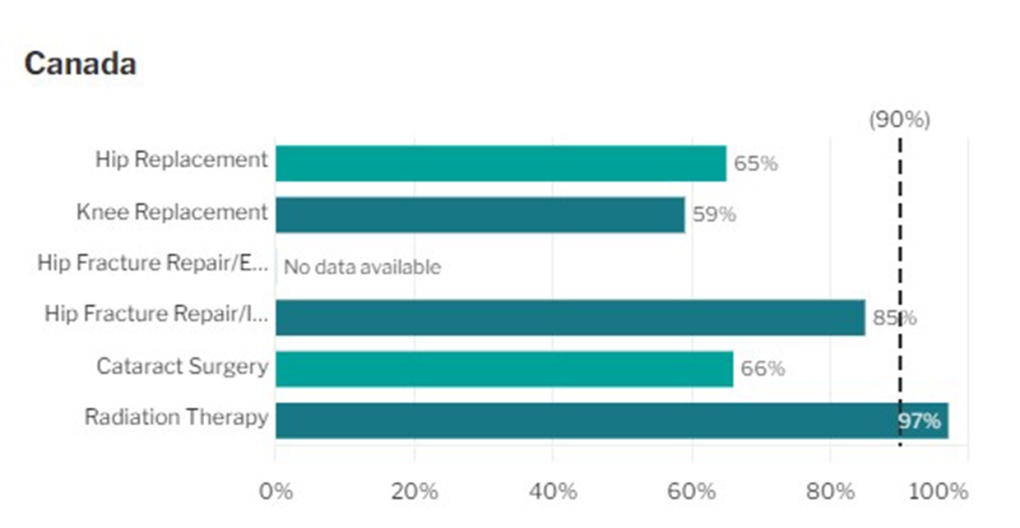 Tracy Johnson, the director of health system analytics with CIHI, says staffing is a major problem plaguing all provinces.

"Prior to the pandemic we had an aging workforce and the pandemic has exacerbated or increased the number of people leaving the workforce to retire or they're plain tired," said Johnson. "So it's finding people. It’s not that big of a challenge to increase the number of surgeries but finding people to do those surgeries and support people in their care after those surgeries (is difficult)."

Elective surgeries, including joint replacements, were cancelled at different waves of the pandemic as the health-care system struggled under the weight of COVID-19.

According to the report, around 600,000 fewer surgeries were performed across the country since the start of the pandemic, with joint replacements and cataract surgeries making up about 25 per cent of the total reduction.

"If you’re not able to work that has an economic impact," explained Johnson. "There's a psychological and an economic and a physical impact of waiting for these surgeries or having them delayed."

He says the current waiting list for surgeries in Alberta is less than 73,000 compared to 82,000 at the peak experienced last fall.

"Scheduled surgery has been disrupted in every province, but we've learned along the way and done better recently. We've avoided across-the-board surgery reductions this past winter and, as a result, the overall waiting list is actually coming down.

"We’ve cut wait times for cataract surgery almost in half in the past year, from 19 weeks to 10, the shortest it has been in seven years."

In April, Alberta announced AHS would be using chartered surgical facilities in Calgary and Edmonton to provide 35,000 eye procedures in the coming year.

According to CIHI, wait times for MRI and CT scans have also improved since the start of the pandemic with an additional 9,000 CT scans compared to last year and 20,0000 MRIs.

"There has been quite a ramp up in them. The typical wait times is now 13 days for a CT scan and 45 days for an MRI and that is improved. That’s about a half of that it was in 2019," said Johnson.