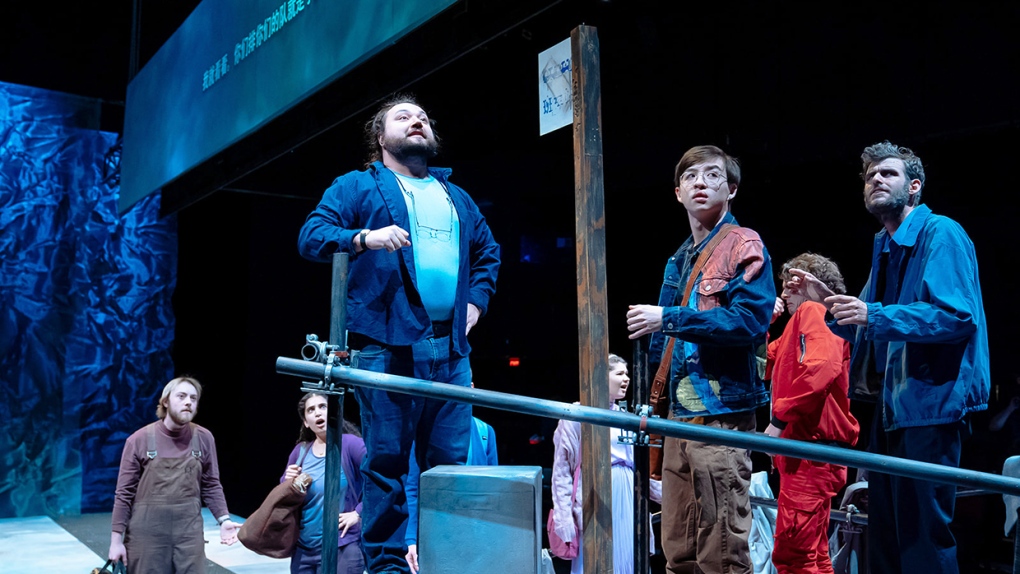 Absurdist drama The Bus Stop premiered in Beijing in the 1980's, where it was a hit with audiences but banned by the Chinese government after 13 performances, for being considered 'spiritual pollution' (Photo by Tim Ngyuen)
CALGARY -

A play by a Nobel Prize winning author that was banned in China in the 1980s after only 13 performances is back onstage, only in Calgary.

The Canadian premiere of The Bus Stop, by Gao Xingjian, is being presented at the University of Calgary. It's a student initiated project, being directed by MFA Directing candidate Fangzheng (Nick) Wang.

The play tells the story of a group of citizens waiting for the 'bus to the city' to arrive, with all the promise that entails of better lives.

Written in the 1980s, the play premiered at the Beijing People's Art Theatre, where it was said to be a hit with patrons, until it was shut down by the Communist Party after 13 performances for being 'spiritual pollution'.

Now, more than 30 years later, The Bus Stop resonates as a cry for a return to normalcy after the stresses of the pandemic said Christine Brubaker, U of C's Drama Division lead.

“The Bus Stop becomes a metaphor for our collective longing of the last 21 months,” said Brubaker in a release. “And with crossing languages, histories, geography and cultures, this play celebrates the shared vulnerability and aspirations in a post-pandemic era.”

The play remains an influential text in Chinese absurdist drama. During the 1980s, Xingjian published a number of novels, plays and other writing considered critical of the Chinese government. He ultimately left the Communist Party after the Tiananmen Square massacre, and relocated to France, and has since become a French citizen. He won the 2000 Nobel Prize for literature.

It runs through Dec. 4 at the University Theatre at the U of C and features Mandarin subtitles.

Tickets are $22 (adults) / $17 (students/seniors) and are available online through scpa.ucalgary.ca/events or at the door.