Belting it out on the bus: Karaoke Bus rolls into Calgary

Belting it out on the bus: Karaoke Bus rolls into Calgary

Calgary Transit officials say a pilot project to let riders sing on a modified city bus is more than just a one hit wonder.

The first Karaoke Bus rolled into Brentwood station in the northwest on Wednesday morning and Calgarians quickly lined up to take turns on the microphone.

With the project hitting the right note with riders, there are already plans to send the stage on bus routes throughout the city.

"We're really excited to now take this on the road. Next week, we will be putting it in service," said Stephen Tauro with Calgary Transit.

"It will be on a random route, people won't know. They will have the option to take a normal bus if they want, but they can jump on this one for free and enjoy some music and perform while on their journey." 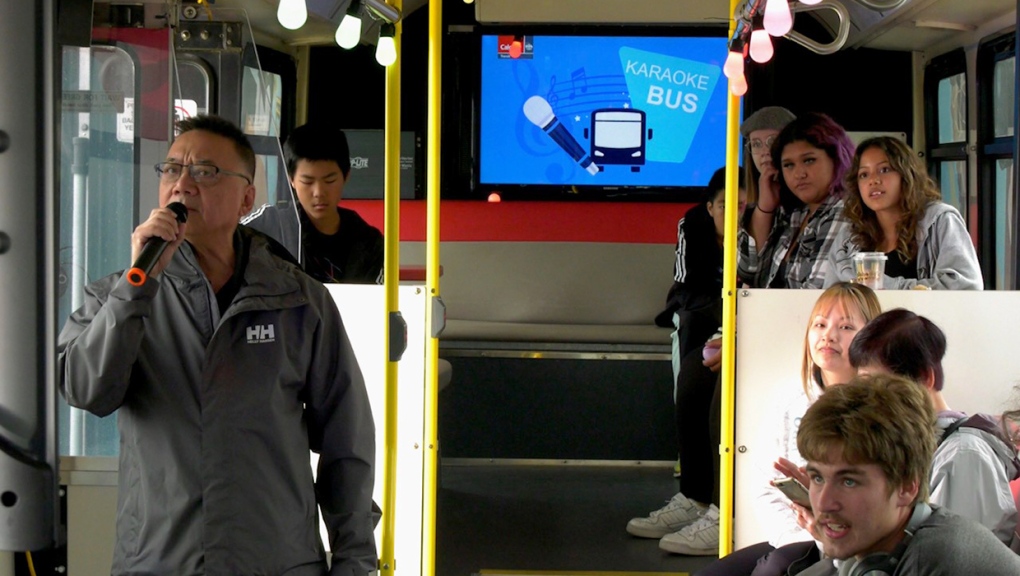 The first Karaoke Bus rolled into Brentwood Station in the northwest on Wednesday morning and Calgarians quickly lined up to take turns on the microphone.

Among the first singers to belt out a tune on transit was Tonica Clements. She's a regular transit rider, but had never seen a karaoke bus before.

"I think it's absolutely amazing," said Clements, who sang a pair of songs on the bus.

"Especially after the pandemic and everything going on and being dislocated from people, this is nice to be able to just let loose and to meet others."

Tauro admits organizers weren't sure how the idea of a stage on wheels would go over with transit users, but he said people were lined up to hop on the bus well before it opened for the first time.

"This idea really stems from our challenge to improve the customer experience. We were challenged with the pandemic -- it's been a hard two years -- so we were really looking at ways to activate transit spaces and bring back the joy to taking transit," Tauro said.

#CTRiders, stop by Brentwood Stn on July 6 between 11 am & 1 pm and join us for our Karaoke Bus! We know what you’re thinking: Finally! A chance for me to provide some musical entertainment for my fellow commuters! And you’re right, it’s about time!,e can’t wait to see you there! pic.twitter.com/VmN2X7oG16

Jessica Maryka is another transit rider who took a turn singing karaoke. She chose to sing 'Fancy' by Reba McEntire because she was "feeling saucy," she said.

"I've never heard of anything like that before. You hear of maybe turning a bus into a house or whatever, but never a karaoke bus," Maryka said.

5 ways being single can cost you more

Amid high inflation and rising cost of living, a person's relationship status can impact their finances. There are five ways in which flying solo can put you at a financial disadvantage and a few ways to mitigate them.