Hundreds of residents in a beltline apartment building are struggling to access their homes or leave them after both elevators broke down, leaving only a stairway as the way in or out of the building.

Tenants inside the 17 floor Birkenshaw Apartments building at 13 Avenue and Fifth Street said they’re anxious, frustrated, and in desperate need of groceries or medical supplies.

Dave Brault for example, requires a walker to move around and hasn’t left his residence for the past 10 days.

The senior citizen lives on the 16th floor and has already had to cancel three medical appointments as a result.

“I’ve had seizures before so it’s a matter of minutes to get oxygen and it takes several more minutes to go down the steps to carry someone down the stairs,” Brault said. 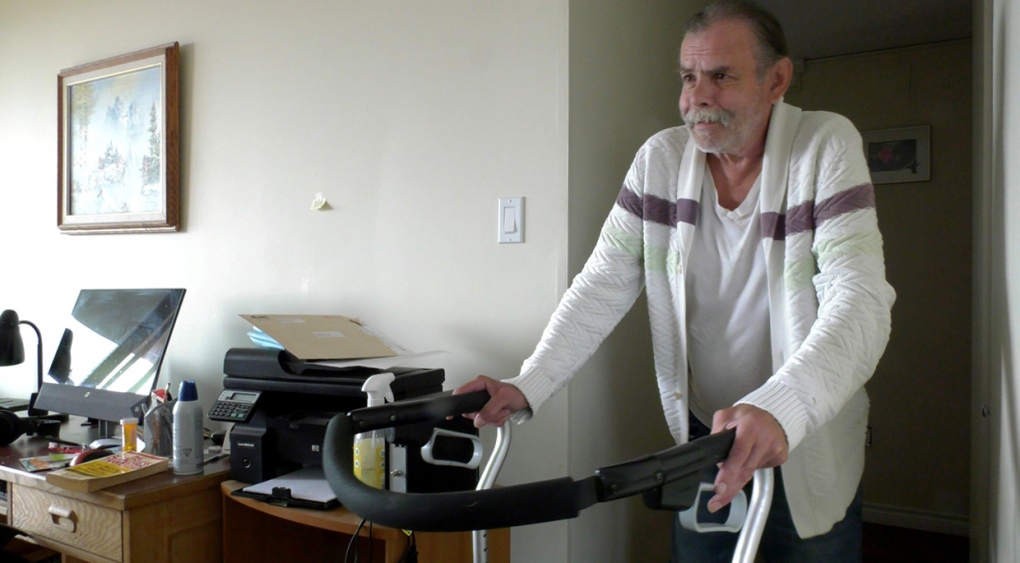 Dave Brault for example, requires a walker to move around and hasn’t left his residence for the past 10 days.

Multiple residents confirmed to CTV News that one of the building’s elevators had not been working properly since early 2020, prompting the overuse of the second and only other operating lift.

Inevitably, the second elevator malfunctioned last week on July 21 when its motor blew, causing a fire in the building.

Dani Burke, who lives on the  17th floor has osteoarthritis and mobility issues. Burke wrote a letter to Homestead Land Holdings, which manages the building.

In it, she described the feeling of having to climb to the top of her building Saturday, which took more than 30 minutes and caused her to be in excruciating pain.

“Going down the stairs when one has osteoarthritis can be extremely dangerous, because if you even step slightly the wrong way, your knee gives out causing you to fall,” Burke said.

“It takes every effort possible for me to get from my bedroom to the washroom again, I’m still in so much pain.”

Burke added that the stairwells are particularly very cramped, claustrophobic and not properly ventilated.

The property management company has provided water bottles and chairs every couple of floors for people to take breaks, but some residents feel that’s unacceptable.

Lovell Young is a senior who lives on the 16th floor.

The man, who is in his 70s, suffers from COPD and has breathing problems, noting that he’s struggling to properly take care of his dog who provides him with company each day.

Young mentioned that the property management team has opened up the rooftop of the building for dogs to go to the washroom, but several of the hallways and stairwells have been covered in urine and dog feces as a result. 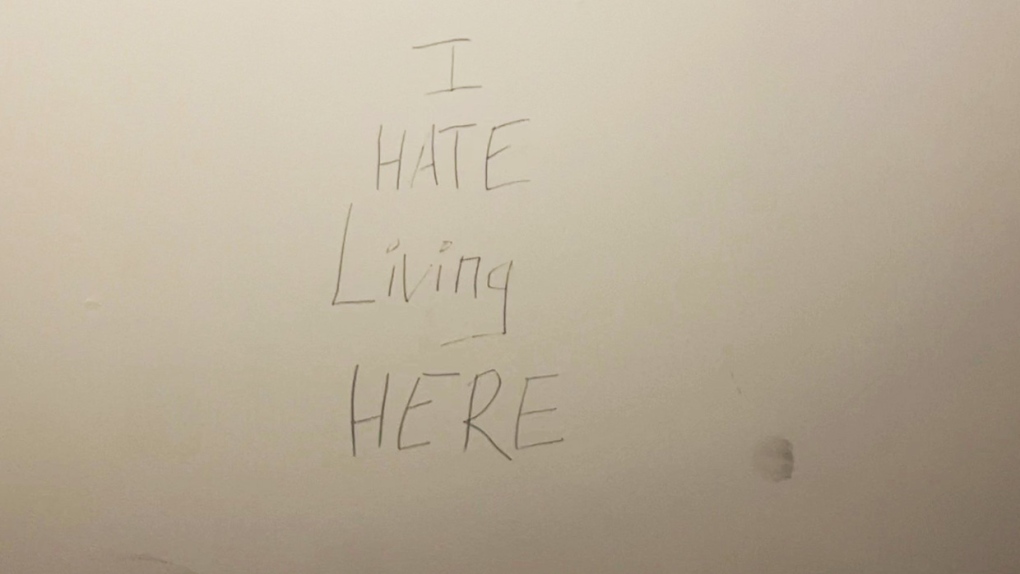 Graffiti inside the Birkenshaw Apartment in Calgary, July 2021

Homestead Land Holdings has offered residents of the Birkenshaw Apartment a free month of rent for August, along with a monthly rent discount of $125 for each suite which is effective from July 1 to December 15.

Free coffee and donuts have also been provided to residents on the ground floor.  Security teams are working to assist people with getting up and down stairs and with the delivery of important supplies such as medication and groceries.

Homestead has apologized for the inconvenience and said it is working closely with Thyssen Krupp Elevators to ensure an expedited schedule for repairs is set and that both elevators can soon operate simultaneously.

An exact date for the repairs to commence or be completed was not provided, but Homestead mentioned the effects of COVID-19 have further delayed the delivery of parts.

“Parts sourced from the southern United States are expected to arrive today (July 26) and will be prepared for replacement in the second elevator on an urgent basis,” the statement read.

“We recognize the difficulty that this disruption poses to our residents and we have been working diligently with our elevator contractors to do everything possible to restore service to the building as quickly as possible.  We appreciate our residents continued patience as we complete the repairs.”

Homestead added that it will continue to provide on-site physical assistance and financial compensation.

Co-founder and CEO of Included by Design Sean Crump noted that challenges accessing a building can be detrimental from an emergency standpoint.

“If a fire or something were to occur, having protocols or equipment such as Evac chairs are essential, you need collapsible chairs that are operable in fire wells and staircases to get people up and down safely,” he said.

“There’s a huge amount of anxiety that comes with being trapped and knowing that there is no way out or a number of barriers eliminates the independence and freedom of navigating your community.”

Crump added that all residents should have the opportunity to escape their apartment for quality-of-life purposes and management companies need to take issues like this very seriously.

In particular, it was concerning for him to hear that one of the Birkenshaw building’s elevators was down for more than a year.

“This needs to be a priority that proper maintenance is done and having issues dealt with as they arise because nothing ever operates 100 per cent.”