A massive crowd gathered at Confederation Park in the northwest on Saturday morning for a pancake breakfast. The celebration included the opening of a time capsule set in place at the park's opening during Canada's 100th birthday in 1967 and the singing of O Canada. The capsule contained a centennial coin set, newspapers and documents.

Thousands of people made their way to Fort Calgary to take part in a record attempt. The group donned red and white shirts to create a living flag. The official number of participants was 3,150, falling short of Winnipeg's record.

Saturday's festivities will culminate with a 10:00 p.m. performance by Tegan and Sara at the Riverfront Avenue East stage near the Harry Hayes building followed by a fireworks display set to start at 11:10 p.m.

For a list of local Canada 150 events, visit Canada Day Celebrations in Calgary 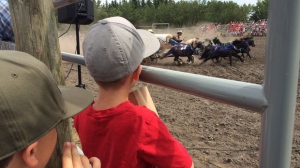