Yet another curriculum protest was held in Calgary Saturday to speak out about one of the province's most contentious issues.

Even after alterations, thousands of Albertans believe the provincial government and Education Minister Adriana LaGrange have gotten the new education material all wrong.

So, calls to "ditch the draft" piped up once again this weekend, with gatherings in seven Alberta municipalities.

"We literally have a cut-and-paste Frankenstein draft with no rhyme or reason that is set to go forward across all grades this fall," organizer Angela Grace said. "It is not fit for human consumption."

Implementation of the new curriculum has been rocky.

Intense public pushback has followed the UCP government's education ideas since they were first unveiled.

In September, new K-3 math and english language arts will be brought to classrooms in a slimmed-down version of the government's original plan.

New K-6 physical education and wellness will also be implemented.

Those subjects are left after heavily-criticized social studies, fine arts and science drafts were postponed.

Many are still upset.

Calgary's protest – the fourth gathering since the original curriculum announcement – drew in hundreds of parents, teachers and students.

I'm not too confident that (the government) will listen to this," parent Heather Boychuk said, "but we've got to give it a try."

Grade 12 student Hayley Bryant said she attended for the next wave of students.

"I'm really here to set that example for future generations to join us in the activism," she told CTV News Calgary.

And educators – backed by the Alberta Teachers' Association – also attended in droves.

Many are worried they won't have the new material long enough to prepare for the upcoming school year.

"We cannot expect all teachers in Alberta to have sufficient training to put this curriculum forward," Grace said. 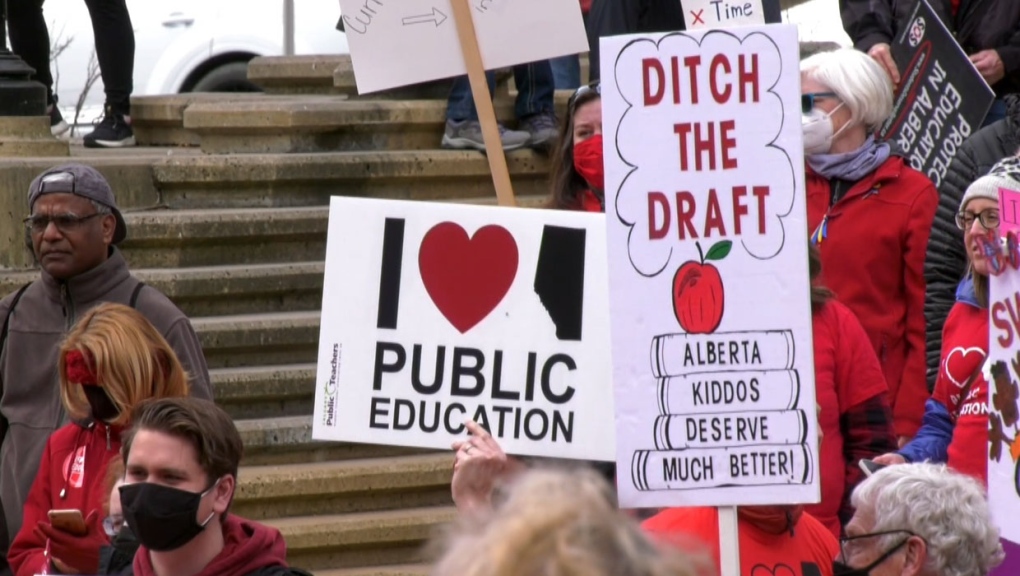 The education ministry insists the process is still an open and transparent one.

A statement from press secretary Katherine Stavropoulos says "over the past year, we have been listening to feedback from Albertans, education partners and piloting school authorities on the draft K-6 curriculum. The feedback from all engagement opportunities and classroom piloting is being used to further revise draft K-6 content."

Last month, the provincial government said it is investing $191 million over three years for teacher professional development and learning, and teaching resources. It believes the money will ensure educators and students are equipped for the full curriculum when it reaches classrooms.

Curriculum renewal in Alberta began in 2010 under a Progressive Conservative government. It started with the "Inspiring Education" initiative that set high-level ideas for how to improve classroom learning in the province.

"So this process has been going on for a long time," said Carla Peck, a professor of social studies education at the University of Alberta.

"Unfortunately, when the UCP picked up the baton, they didn't bother considering all the excellent work that had been done previously," she added. "They decided that they knew best and that they were going to try and do it themselves."

In her eyes, the curriculum represents a step back, emphasizing memorization of concepts instead of promoting critical and creative thinking.

"The curriculum itself looks like something from the 1950s with long lists of information, disconnected from big ideas and concepts," she told CTV News Edmonton. "It's really going to look like a curriculum that maybe grandparents in the province will remember where they had to memorize all kinds of information and regurgitate it on a test."