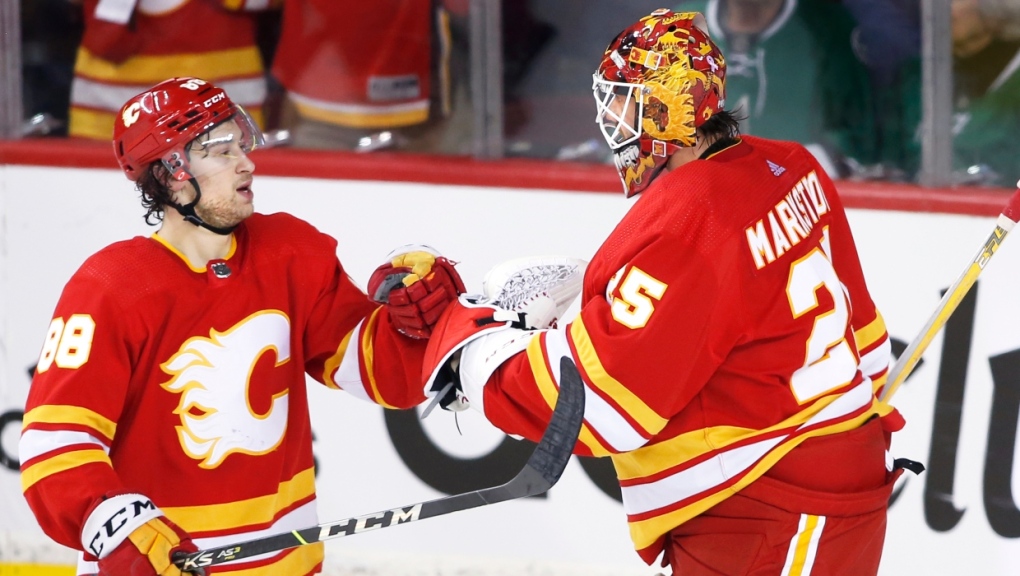 Darryl Sutter isn't about to reveal his plans for a potential series-clinching game, but the Calgary Flames have won back-to-back playoff games with the coach taking from his forwards and giving to his defencemen.

Running 11 forwards and seven defencemen instead of 12 and six in two straight wins not only eased pressure on Calgary's back end, but the mixing and matching of the forward lines threw a few wrinkles at a dense Dallas Stars defence.

Up three games to two in the best-of-seven conference quarterfinal, the Flames could close out the series, and advance to the second round of playoffs for just the second time in 17 years, with a Game 6 win in Dallas on Friday.

Stifled by the Stars and trailing 1-0 after two periods in Wednesday's Game 5, Sutter threw forwards Andrew Mangiapane, Mikael Backlund and Blake Coleman together in the third period.

The trio was a winning combination. Backlund scored the equalizer and Mangiapane's game-winner in a 3-1 victory was his first goal of the series.

"Other than the top line, we've kind of all played with each other this year and so are used to kind of playing with everyone,'' Milan Lucic said.

Calgary ranked sixth in the NHL in goals scored in the regular season.

The tight, low-scoring series with Dallas has tested the patience of the Flames' top line of Johnny Gaudreau, Elias Lindholm and Matthew Tkachuk, although they figured prominently in Calgary's first two wins.

Penalty killers have dominated with Calgary at 90 per cent and Dallas at 89.5 per cent successful. Even-strength goals have been a chore for both sides with a combined eight in five games.

All but one game has featured an empty-net goal, with Backlund scoring one in a 4-1 victory in Game 4 in Dallas.

On a night in which Gaudreau, Lindholm and Tkachuk got extra attention from the Stars, Mangiapane and Backlund produced the five-on-five depth scoring Wednesday that the Flames had been missing in the series.

Gaudreau's 115 points in the regular season tied for second with Florida's Jonathan Huberdeau in the Art Ross Trophy race behind Connor McDavid (123), yet both Gaudreau and Huberdeau were passed over for league MVP consideration Thursday.

Darryl Sutter talks about the evolution of Johnny's game, having veteran leadership amongst the roster, and Game 6. pic.twitter.com/E7AyAXXBe0

The coach said he didn't like his team's defensive play in the first three games, and thought playing short-handed for most of Game 1 was taking a toll on his defencemen.

Rasmus Andersson's game misconduct at the first-period buzzer left Calgary with five blue-liners for the remaining 40 minutes in the series opener.

Stone banked a combined 20 minutes in the two games he's played, logged just under five minutes on the power play, and led the Flames in shots on goal in each with eight and four respectively.

"I've done that 11-7 before. Trust me it works. I know it works,'' said Stars head coach Rick Bowness, who said it was routinely employed when he was an associate coach with the Tampa Bay Lightning from 2014 to 2018.

"It's challenging that way, but you'll always find one defenceman gets kind of shortchanged and sometimes you're disrupting your (defensive) pairs.''

When asked ahead of Game 5 if he would continue with 11 and seven, Sutter replied ``Why would I answer it? Get Rick up here. We'll talk about our starting lineups so it's friendly for the media.''

With Stone and Ritchie both participating in pre-game warm-up, Sutter kept everyone guessing until game time.

This report by The Canadian Press was first published May 12, 2022.

Have you been affected by airport delays or cancelled flights? We want to hear from you

Have you been affected by airport delays or flight cancellations? Have you arrived at your destination without your luggage? Did you have to cancel a trip because your passport didn’t arrive in time? We want to hear from you. Email CTVNews.ca at dotcom@bellmedia.ca.

NATO faced rebukes from Moscow and Beijing on Thursday after it declared Russia a 'direct threat' and said China posed 'serious challenges' to global stability.