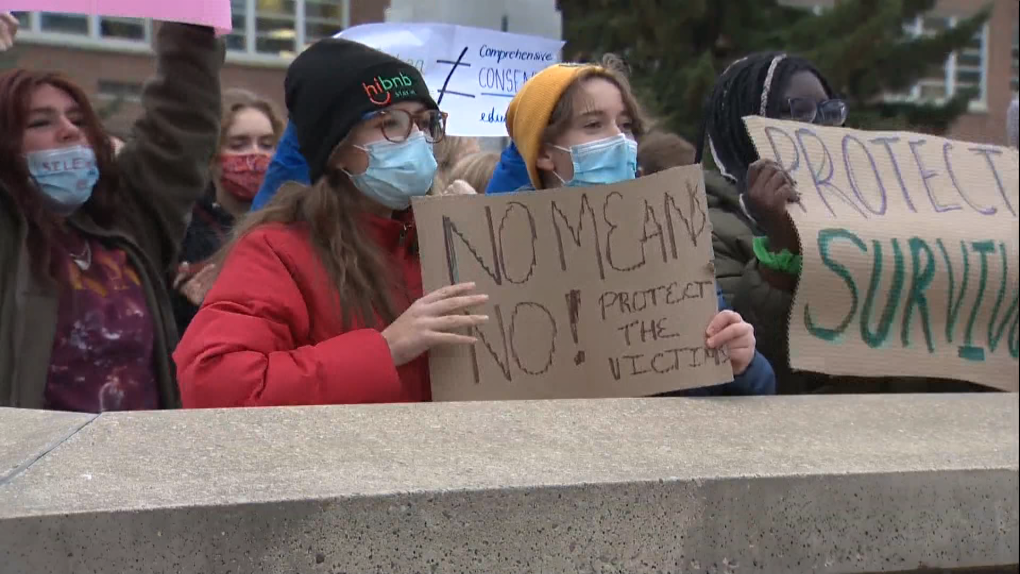 Dozens of Western Canada High School students walked out of class Tuesday to voice their concerns with school administration's handling of an alleged sexual assault.
CALGARY -

Students at one of Calgary’s biggest high schools are prepared to walk out of class Tuesday in support of sexual assault survivors.

Protest organizers at Western Canada High School in southwest Calgary say their action is in response to allegations of sexual assault and what they're calling a lack of support by school administrators.

They say the rally's main messages are safety in school, education regarding the issue and accountability.

"This has definitely been a movement that's kind of been slowly building up," said student Hayley Bryant. "I think it's really unfortunate that it's had to come to a walkout to gain attention on this movement.

"It's really about school safety. No one should be coming to school fearing that they're going to get assaulted."

Bryant says students are becoming increasingly aware that "rape culture is very prevalent at Western Canada High School" and that it will take a collaborative effort with faculty to solve the problem.

"This is very much a call-to-action for administration. We want to work with them. I've had some meetings with administration and I've very grateful that they're willing to share ideas."

In a statement to CTV News, the Calgary Board of Education said in part:

"We are aware of the allegations. We can’t speak to specific details, however, ensuring that school environments are safe for all students is critically important to the CBE.

"The CBE has a process for working with families and students to address concerns and reports of this nature. We take these matters seriously and where required, we also support students and families to work with [the Calgary Police Service]."

Ward 11 Coun. Kourtney Penner, who has a child who attends the school, says she will be at the walkout to show her support.

"So if I can extend myself as a parent, or as an elected official to be a safe person for someone to come and talk to, I’m here."

If you have experienced sexual violence and need support, please contact Calgary Communities Against Sexual Abuse at 403-237-5888.