More than 1,500 people handed out their resumes and made important connections at a job fair seeking to attract new and experienced professionals to Calgary’s booming tech industry.

DiscoverTech YYC held the event at the newly opened Platform Innovation Centre on Friday by welcoming more than 30 tech companies, five post-secondary institutions, and 10 community organizations to showcase their opportunities.

The tech expo is a partnership between Platform Calgary and Tech West Collective with the aim of driving awareness and building interest in tech jobs.

“Hiring talent is kind of like a top three problem for anybody trying to build their company in Calgary,” said Platform Calgary VP of Growth Jennifer Lussier.

“We’re seeing a lot more people coming into technology and building start-ups. Alberta is unique in that we have, obviously, a resource-driven economy with super unique challenges around technological solutions that can help solve those problems for those industries.”

The surge in demand for tech work is inspiring some Calgarians to switch career paths entirely and adapt by honing their skills in a completely new environment.

Anca Dan is an HR professional who spent more than a decade working in oil and gas, but recently transitioned to the tech industry by founding her own app called Single Parent Life.

“There are quite a few unicorns coming out of Alberta so I think jobs are changing, the province is growing and people are leveling up when it comes to their skills and their networking within the industry,” Dan said.

“I think the tech beat is booming and I know that companies are having a tough time finding full time designers, back-end work so people are looking for more technical skills and a lot of oil and gas people are taking that step.”

The recent boom is also why Calgary-based financial tech companies like Symend are working to fill roles locally and find experienced workers. 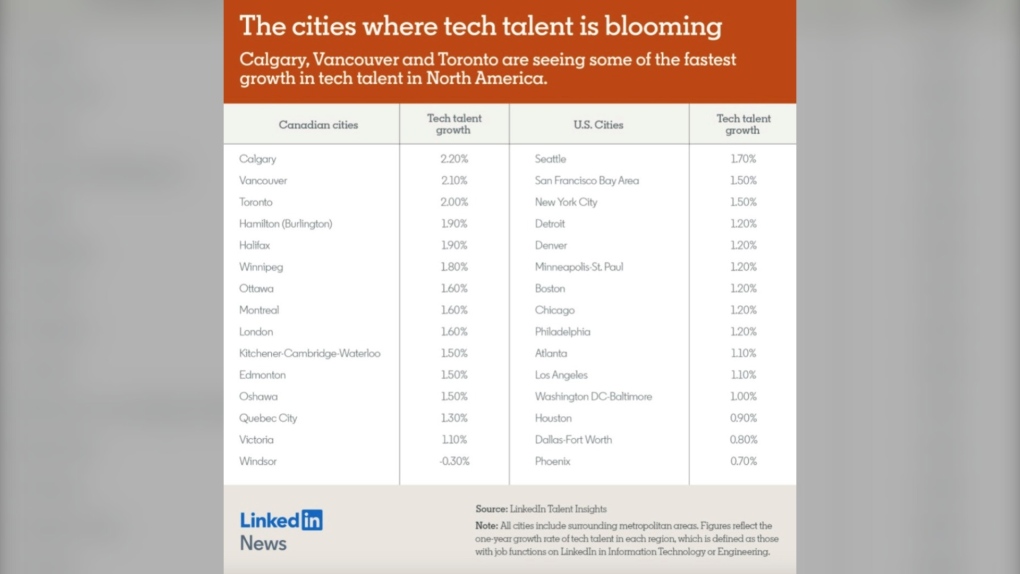 “There’s way more open roles than there are people to fill them so I think for sure this is the space to be in, but the challenge is getting that first opportunity and getting your foot in the door,” she said.

“But I’ll tell you once you do that, and it's going to take a little bit of work, the sky's the limit for career growth and I think we’ve done so much to promote those opportunities with so many great programs in Calgary.”

Some younger students however are still struggling to find a position close to home.

Taylor Fielding, a 21-year-old studying Mechatronics Engineering at the University of Waterloo would like to return to her hometown of Calgary  after graduation.

There have been a lot of opportunities outside of Alberta, not too many for me personally in Alberta just yet,” Fielding said.

“But events like this tech job fair I think bring great opportunities to network for potential co-ops or even future employers after graduation so I’m staying optimistic.”

The 2022 Global Startup Ecosystem Report (GSER) by Startup Genome was launched last week during London Tech week and recognized as one of the fastest growing tech cities.

Calgary ranked high in several categories out of 140 tech ecosystems.

It ranked in the top 10 in North America for affordable talent, top 20 for talent and experience and one of the top cities for funding of innovation projects.

The city’s CleanTech and Fintech sectors specifically were highlighted for their density of talent, support resources and start-up activity.

“Calgary is an exciting place to be for those in the tech and innovation space,” said Doug Schweitzer, Alberta Minister of Jobs, Economy and Innovation.

“Not only is the city breaking VC records, we’re leading the continent in tech talent growth. Momentum is on Alberta’s side."

According to data released by LinkedIn in April of 2022, Calgary also had the fastest growth of tech talent in North America in the past year.