It was a wild goose chase of another kind, as a Canadian icon floated alongside a group of kayakers and paddle boarders for their entire 32-kilometre trek on the Columbia River in B.C.

Justin Sain, a professional stunt performer who has appeared in television and film, was among the paddlers who set out on the trip from Parson to Nicholson in August.

The group of four had prepared for a river journey lasting several hours southeast of Golden, but never expected a feathered fifth member would soon tag along.

"We hop into our kayaks and, all of a sudden, this goose appears out of nowhere," Sain told CTV News of the bird they dubbed 'Zeke'. "We weren't sure if it was going to attack us or not.

"We took off and left the goose behind, but we looked back and it was following us at a rapid pace. So we waited for it and it caught up and it just stuck with us for the entire day."

For seven hours, the fowl followed along, floating and honking with the group.

When the four paddlers would get too far apart on the river, Sain said the goose would honk at them until they all grouped up again. 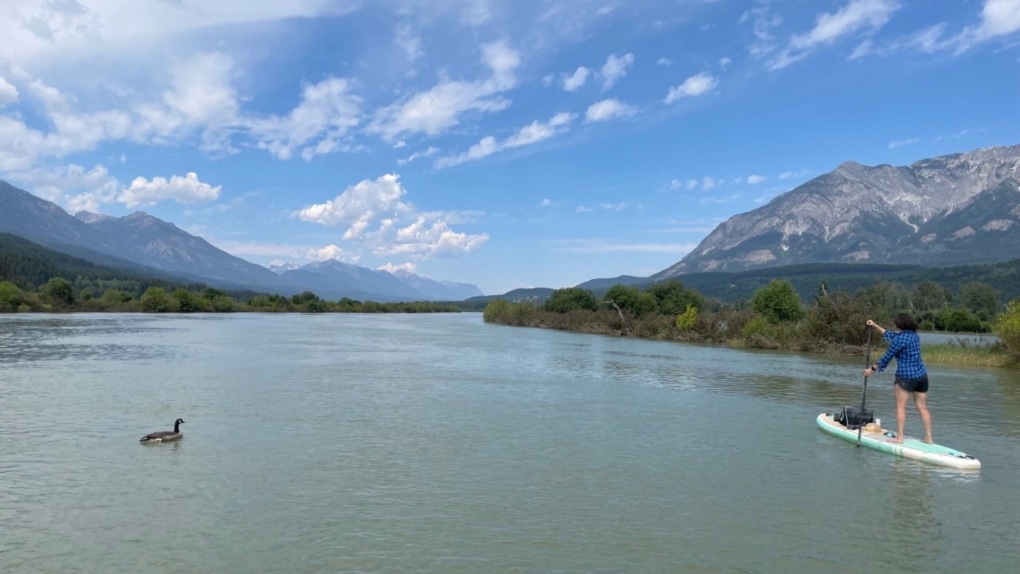 A Canada goose joined a group of kayakers and paddle boarders for an August float on the Columbia River southeast of Golden, B.C.

When the kayakers would come ashore for rest breaks, so too would the goose. As they neared their destination, they soon realized their time together with Zeke was coming to an end.

"We all wanted to take him with us. We all fell in love with him."

Sain says the end of their river trip, and their time with Zeke, proved to be the start of the bird's new life.

"He got adopted by a local woman and now hangs out with her chickens and she takes him down to the river quite often.

Sain says he's made the trip down the river many times, but the paddle with Zeke the feathered river guide was by far his favourite and most memorable.

"Every time I hear a goose honk, I think of that (day) and it puts a smile on my face."