Two Calgary veterans of the Dieppe Raid received high honour from the government of France, during ceremonies on Friday to commemorate the 80th anniversary of the attack.
On Aug. 19th, 1942, nearly 5,000 Canadian soldiers landed on the beaches of the small French town to test the enemy's defences, damage its port facilities and gather intelligence to help defeat Nazi Germany.
But the cost was high.
More than 900 Canadians were killed, many others were wounded and nearly 2,000 became prisoners of war.
Tpr. Gordon Fennell, now 100 years old, who fought with the Calgary Tank Regiment, was made a Knight in the French Legion of Honour at a ceremony in Dieppe.
"Mr. Fennell was just a youngster when he and his comrades from the 14th Army Tank Regiment stormed the beaches all those years ago," said Canada's official languages minister, Ginette Petitpas Taylor, at the event.
"Please join me in thanking Mr. Fennell for his service during the war and particularly during the Dieppe Raid."

Also this week, Tpr. Bill Stewart was made a Knight in the Legion of Honour.
The French consul general awarded him the honour in a ceremony at the Military Museums in Calgary.

Tpr. Bill Stewart (Ret.’d) received the French Legion of Honour at Calgary’s Military Museums. (Patricia Murphy)
Stewart was a gunner in a Churchill tank, bogged down on the beach.
He was captured and spent three years as a prisoner of war.
"He is an extremely humble man," said Maj. Patricia Murphy (Ret.'d), past president of the King's Own Calgary Regiment Association. "He just thinks he went and did what everyone else was doing. And he doesn't realize the kind of respect that we hold for him."
Murphy travelled to Dieppe for this week's ceremonies.
"They didn't just fight for Canada," she said of the soldiers. "They fought for complete strangers, to have complete strangers liberated from the Nazi tyranny. And I think that kind of selflessness is a role model that we need to embrace."

Another of those selfless soldiers at Dieppe was Calgary Tpr. Archie Anderson.
He received the Military Medal for Bravery after recovering the wounded until he could find no more survivors. 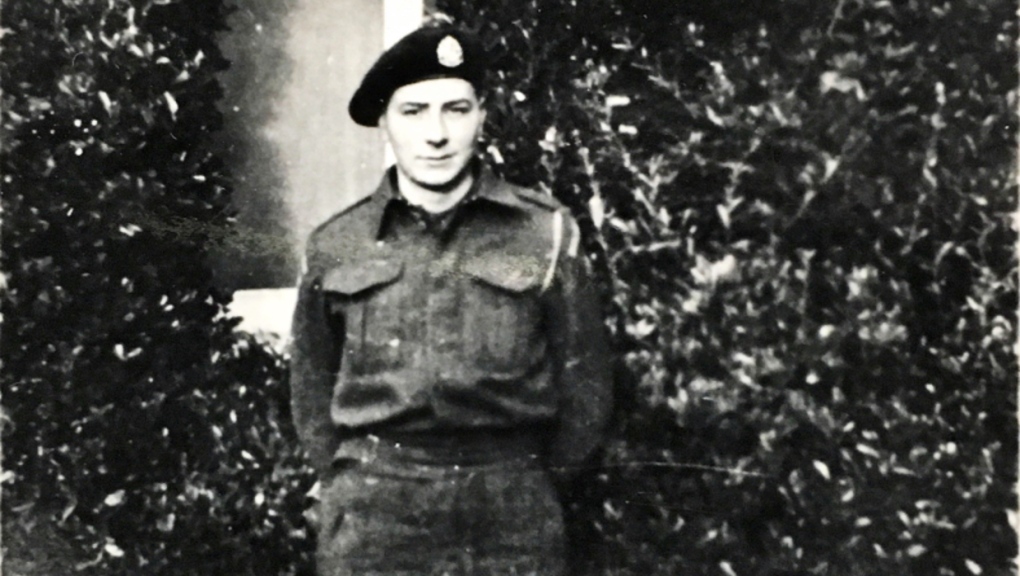 Tpr. Archie Anderson as a young soldier, in the month before the Dieppe Raid. (Chad Anderson)
"His best friend beside him at Dieppe that day ... was killed, pulling wounded out of the water, trying to save lives," said grandson Chad Anderson.
Archie Anderson became a prisoner of war.
His family did not know if he was dead or alive until his father spotted a photo from the German propaganda ministry, in Life magazine.
"It was a photo of someone helping the wounded, loading wounded onto an ambulance," said Chad Anderson. "My great grandfather hoped against hope that it was in fact, a photo of his son. And in fact, it was."
Archie Anderson was a POW for nearly three years. He died in 2008.
"They knew the price they would pay," said his grandson.

Members of the Calgary Tanks trained at the Mewata Armouries and in Ontario, before they were sent overseas.
They went into history as the first tank regiment of the Canadian Army to go into battle with the enemy and the first unit engaged in amphibious assault during the Second World War.
The regiment lost 13 men in the Dieppe Raid, and 157 were taken prisoner.
A mortar platoon from the Calgary Highlanders also took part in the raid.