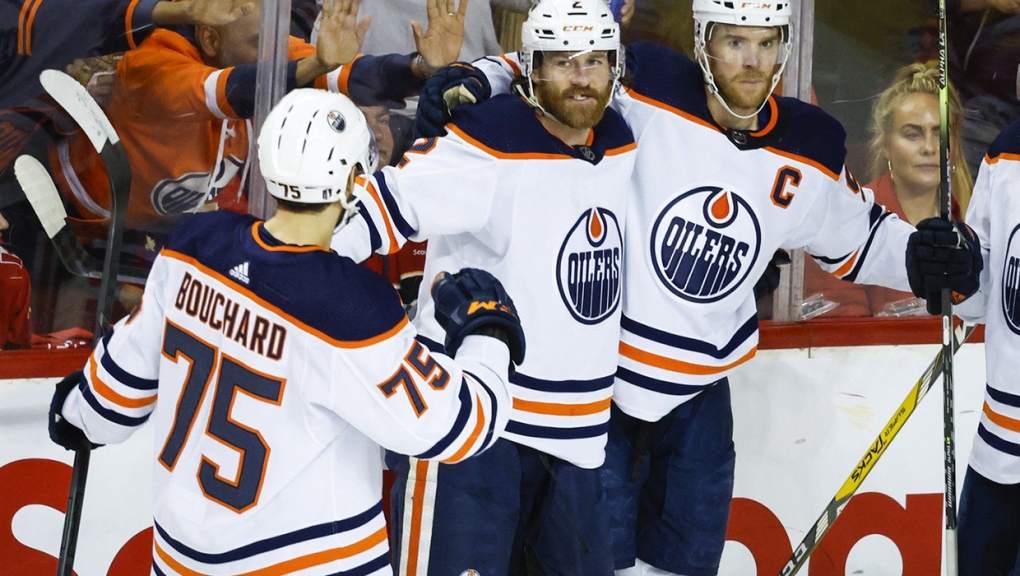 Zach Hyman scored the winning goal shorthanded for the Edmonton Oilers in Friday's 5-3 win over the Calgary Flames to even their playoff series at one victory apiece.

Edmonton captain Connor McDavid's goal and assist Friday made him the fastest active player to reach 20 points (six goals, 14 assists) in a single post-season, and fastest among any player since Mario Lemieux in 1992.

Leon Draisaitl and defenceman Duncan Keith each had a goal and two assists and Evan Bouchard also scored for Edmonton.

After he was pulled early in Game 1, Oilers goaltender Mike Smith made 37 saves for the win and assisted on Draisaitl's insurance goal.

The best-of-seven Western Conference semifinal heads to Edmonton's Rogers Place for Sunday's Game 3 and Tuesday's Game 4. The Oilers went 18-4-2 at Rogers Place over their final 24 games of the regular season.

Calgary (50-21-11) topped the Pacific Division ahead of runner-up Edmonton (49-27-6) in the regular season. The Alberta rivals are squaring off in the playoffs for a sixth time, but the first since 1991.

One of the NHL's top teams five-on-five, the Flames were shorthanded for almost 11 minutes Friday. Edmonton scored its first power-play goal of the series midway through the second period to send the game into the third deadlocked 3-3.

Hyman turned Calgary's offensive-zone turnover into a breakaway. He scored the shorthanded, go-head goal going upstairs on Markstrom at 10:14.

Smith head-manned the puck to Draisaitl for another breakaway just over two minutes later. The forward, who is playing through a lower-body injury, put the puck off the post and in on Markstrom's stick side at 12:36.

With Ryan Nugent-Hopkins penalized for slashing at 16:48, the Flames couldn't convert a power play into a goal. Calgary went 1-for-5 with a man advantage in the game, while the Oilers were 1-for-6.

Two broken Oiler sticks contributed to a pair of Flames goals in the first two periods. Defenceman Darnell Nurse was hampered down low without his in the second period and didn't manage an exchange with a forward.

Gaudreau threaded a pass to the front of the crease for Elias Lindholm to flip to Toffoli, who scored a power-play goal at 2:04 for a 3-1 Calgary lead.

Draisaitl's goal at 2:31 of the second was waived off. Flames head coach Darryl Sutter successfully challenged goaltender interference by McDavid.

But McDavid struck seconds later to draw Edmonton within a goal. He rolled off Calgary defenceman Nikita Zadorov into open ice, took a pass from Keith and stickhandled the puck by Markstrom's outstretched pad at 3:05.

Bouchard pulled the Oilers even at 15:03 during Stone's double minor for high-sticking. The defenceman wired a slapshot from the top of the faceoff circle upstairs on Markstrom.

After setting the record for the fastest two goals to start a playoff game in the series opener with a pair within 51 seconds, Calgary struck early again, 63 seconds after puck drop.

Edmonton, and Smith, recovered faster than in Game 1, however. The Oilers carried offensive zone time and had more chances from the slot than Calgary in the first period.

Hyman celebrated an Oilers goal with just over four minutes left in the opening period, but officials waived it off. The whistle blew before the puck crossed the goal-line in a crease scramble. The Flames took a 2-1 lead into the second.

Keith halved the deficit at 13:45 of the first. McDavid circling out from behind the net held off Flames defenceman Rasmus Andersson with one arm and held the puck on his stick with the other.

Edmonton's captain shovelled a one-handed pass to Keith, who beat Markstrom far side.

The hosts led 2-0 at 6:02 when Smith bobbled an Erik Gudbranson shot. Ritchie pounced on the loose puck in the crease and put a backhand by the Oilers' goalie.

Hyman broke his stick and wasn't able to retrieve another from the bench before Stone's slapshot from the point beat Smith bottom corner glove side at 1:03.

The Flames were minus top shutdown defenceman Chris Tanev for a third straight game. He was injured in Game 6 of Calgary's first-round series against Dallas. Tanev skated in practice this week, but hasn't dressed for games.

This report by The Canadian Press was first published May 20, 2022.