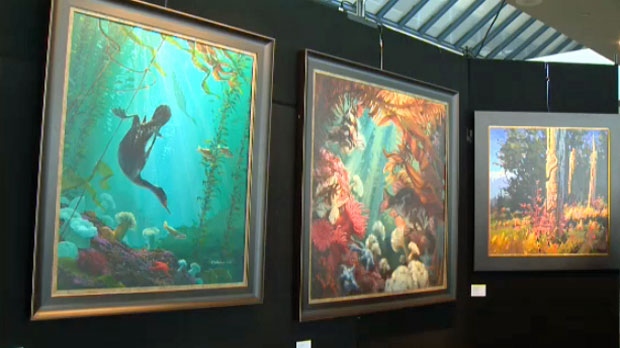 The art was donated by the artists to raise awareness about the campaign.

A group of artists is making their feelings about the Enbridge Northern Gateway Pipeline known through an art exhibit at City Hall.

Canada’s Rainforest at Risk: Art for an Oil-Free Coast is on display until Wednesday in the atrium.

50 of British Columbia’s most accomplished and emerging artists have contributed paintings and sculptures to the exhibition.

They travelled up to the Great Bear Rainforest last June to see the area where the pipeline would be built and created works of art to depict the beauty of the area.

The artists are concerned about the increased tanker traffic on the coast that could result from the pipeline.

Organizers say the exhibit expands the voices of opposition to the project.

"What we wanted to do was to demonstrate that this is two out of three British Columbians that oppose this project and it's the mainstream of British Columbia as well.  It’s just ordinary, even very conservative people in my life who vote conservative who I would never have suspected would be as emotional about this as they are, are very opposed to it," said Brian Falconer, Art Exhibit Organizer.

Falconer says the area is an extremely inappropriate place for the project and that it is one of the most protected and precious areas on the coast.

“There’s no place like this on the planet. This is a really, really rare place,” said Falconer.

He says the goal is to bring out the conversation surrounding the project and to show others how beautiful and important the area is.

The art is for sale and all proceeds go to the Oil-Free Coast campaign.

Admission is free and the exhibit will be in Canmore on the weekend.