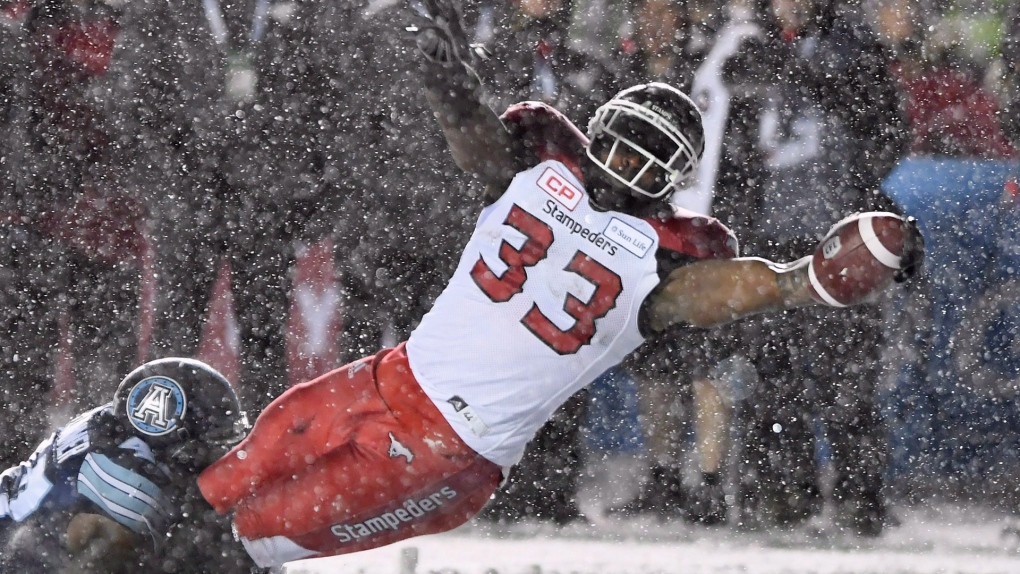 Calgary Stampeders running back Jerome Messam (33) is tackled by Toronto Argonauts linebacker Terrance Plummer (47) as he scores a touchdown during first half CFL football action in the 105th Grey Cup in 2017 in Ottawa. (THE CANADIAN PRESS/Sean Kilpatrick)

Former CFL running back Jerome Messam has pleaded guilty to voyeurism after videotaping a consensual sexual encounter without the woman's permission.

Messam appeared via a video link in a Calgary courtroom Monday to enter the guilty plea.

According to an agreed statement of facts, Messam and the woman began following each other on social media in June 2016, then in November 2016, she posted about plans to go out for dinner in Calgary. Messam contacted her directly and they began communicating, agreeing to meet on Nov. 11, 2016.

Messam, his roommate and the victim met at a Lower Mount Royal restaurant to get takeout before walking back to his residence. They ate, played with Messam's dog and began watching a movie before engaging in consenual sex in his bedroom.

Then in February 2017, Messam sent the woman four video snippets of their November 2016 encounter on the social media platform Snapchat. The videos were each 10 seconds long and disappeared after viewing.

She made a formal complaint to police in B.C. and the Canadian Football League in April 2018. Police in B.C. passed the complaint on to Calgary police as they had jurisdiction.

Messam had his contract with the Saskatchewan Roughriders terminated after he was charged in July 2018.

The judge has ordered a pre-sentence report and a date for his sentencing hearing is expected to be set on March 11.