The staff at Grace Church Calgary held a steps toward truth, healing and reconciliation event on Sunday afternoon, lamenting about the nation’s history surrounding residential schools.

Dozens of Calgarians were in attendance, listening to stories and crying out for peace and justice for indigenous people in Canada.

Grace Church was one of the dozens of Alberta churches vandalized with red paint this summer, following the discovery of remains at former residential school sites including in Kamloops, B.C.

“When we had the red paint splattered on our doors, we recognize that we didn’t have really great relationships with Indigenous people,” said Reverend Jake Van Pernis.

“So we had to form them and recognize that we were going to make some mistakes in those relationships but be brave enough to risk making those mistakes and asking for forgiveness to continue moving forward.”

She shared her story on the steps of the Presbyterian church saying she was put in the system at age 5, leaving a decade later.

“All those years that I was in that residential school, there was a lot of damage done to me,” said Shingoose Dufour. 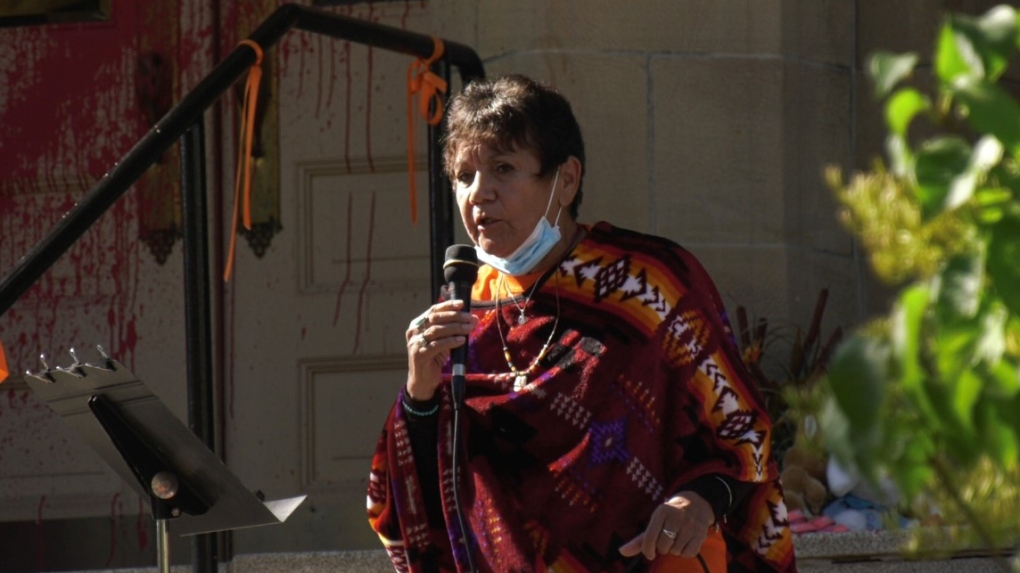 Mayor Naheed Nenshi also spoke at the event saying there is still a lot of work left to do to bring forth a sense of reconciliation and healing.

“A lot of people's hearts are broken now, but broken hearts are also open hearts and this is a chance to be able to work together to figure out what to do,” said Nenshi.

Grace Church says it now does land acknowledgements at its services and tries to foster budding relationships with Indigenous people on a path to reconciliation.

The church says it decided to keep the splattered paint across its doors to serve as a daily reminder it still has a lot of work left to do.

Canada will recognize for the first time the national day of Truth and Reconciliation on September 30th, as a federal statutory holiday.