Indigenous people in southern Alberta are calling for action to back up Pope Francis’ apology for the role the Catholic Church played in Canada’s residential school system.

On Monday, the pontiff formally apologized for the abuses suffered at residential schools during his visit to the former site of the Ermineskin Indian Residential School in Maskwacis, Alta.

“I am deeply sorry. Sorry for the ways in which, regrettably, many Christians supported the colonizing mentality of the powers that oppressed the Indigenous peoples. I am sorry,” he said in his speech.

“I ask forgiveness, in particular, for the ways in which many members of the Church and of religious communities cooperated, not least through their indifference, in projects of cultural destruction and forced assimilation promoted by the governments of that time, which culminated in the system of residential schools.”

Sheldon Day Chief attended St. Mary’s Residential School on the Blood Reserve, which was one of more than 130 residential schools operated in Canada between the 1870s and 1996.

Day Chief said the Pope’s apology brought up memories of his time there.

Day Chief said the apology was broad and failed to denounce and revoke the Doctrine of Discovery, which gave colonizing nations the right to take control of other lands, subdue the people who already lived there and covert them to Christianity.

Pope Francis also called for formal investigations into what occurred in residential schools.

“An important part of this process will be to conduct a serious investigation into the facts of what took place in the past and to assist the survivors of the residential schools to experience healing from the traumas they suffered,” he said. 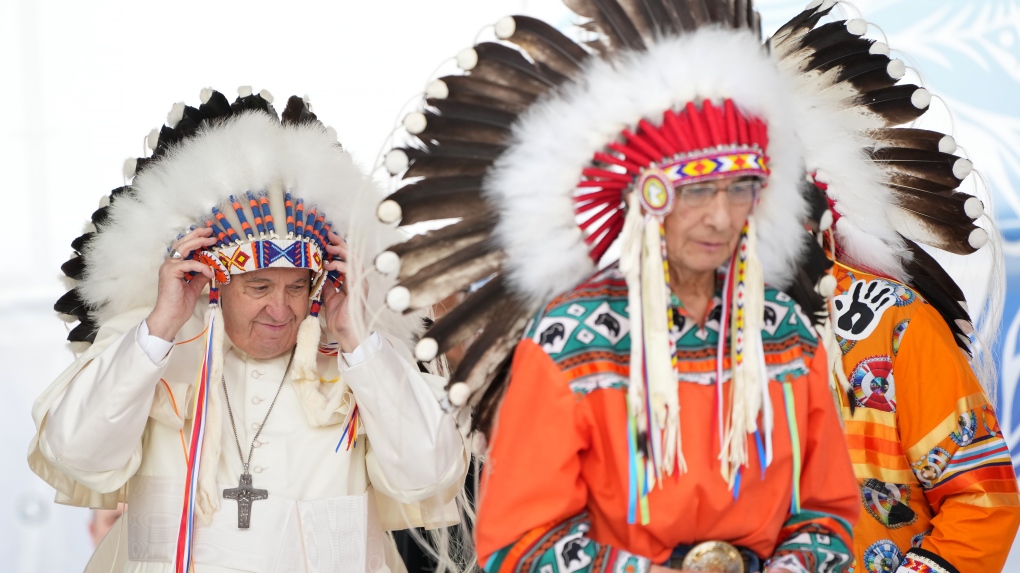 Pope Francis adjusts a traditional headdress he was given after his apology to Indigenous people during a ceremony in Maskwacis, Alta., as part of his papal visit across Canada on Monday, July 25, 2022. THE CANADIAN PRESS/Nathan Denette

Ben Newborn experienced intergenerational trauma from residential schools and ended up in the foster care system.

He said the money spent to bring the Pope to Canada could’ve been put to better use.

“We can use that millions and billions of dollars to get us drinking water where we don’t have that on some reserves or pave a road for us, even a main road to through our reserve.”

Earl Thiessen, executive director of the Oxford House Foundation of Canada in Calgary, which supports people with addictions, said the apology was moving.

He points to the moment where the pontiff was gifted and wore a ceremonial Indigenous headdress.

“Unless he’s reaching out to shake your hand, you really don’t touch the Pope but for him to allow that to be placed on his head, I think was monumental for all of the country and First Nations people,” Thiessen, who is from the Makwa Sahgaiehcan First Nation in Sask. said.

While Thiessen believes the apology is a step in the right direction, he said more needs to be done.

“These people need to be persecuted and they need to be held accountable to the highest degree for the crimes they committed against children,” he said.

Thiessen isn’t the only one calling for the Pope’s words to be put into action.

“The Pope said that the first step was an apology. So, I’d like to know what is the second and third step and so forth,” said Tiffany Prete, an associate professor in the Department of Sociology at the University of Lethbridge.

“That there will be a plan that is formalized and is able to help Indigenous peoples and the Roman Catholic Church walk the path of reconciliation.”

Prete, who is an intergenerational survivor of the residential school system, said what happens next is extremely personal to her.

“It’s something that’s going to affect my kids and my grandchildren.”

Métis Nation of Alberta President Audrey Poitras is calling on the Church and Government of Canada to release residential school records and hold those who played a role accountable.

“The pain and suffering caused is beyond apologies and words. What our people need now is the opportunity and resources to heal,” she said in a statement.

“Five generations of Indigenous children in Canada were forcibly removed from their homes. That level of trauma, unimaginable to many others, will take generations to heal. This can only happen if the Church and the Government of Canada commit to providing resources for mental health, education, nutrition and more.”

For survivors of residential schools and their families, there is a crisis line available 24 hours a day by calling 1-866-925-4419.

A former Canadian senator is facing sexual assault charges in connection with incidents that allegedly took place nearly a decade ago.

As of this morning, travellers to Canada do not need to show proof of vaccination against COVID-19 -- and wearing a mask on planes and trains is now optional, though it is still recommended.

Dozens dead from Ian, one of strongest, costliest U.S. storms

Rescuers searched for survivors among the ruins of Florida's flooded homes from Hurricane Ian while authorities in South Carolina began assessing damage from its strike there as the remnants of one of the strongest and costliest hurricanes to ever hit the U.S. continued to push north.

Federal Public Safety Minister Marco Mendicino is calling Alberta Justice Minister and Solicitor General Tyler Shandro's plan to direct RCMP in the province not to enforce confiscations of prohibited firearms 'reckless,' and is amounting it to 'a political stunt' that won't hold up.

Federal workers are increasingly cynical, skeptical and disillusioned about the idea of reporting wrongdoing in the public service, says a recent survey.