Logan O'Connor grew up playing hockey at the Flames Community Arena's, first for Glen Lake and then for the Calgary Royals.

So for his day with the Stanley Cup, O'Connor thought it was rather fitting to bring it back to the rink he played so many games in.

The 25-year-old said sharing it with the fans in a place he had so many good memories in was the right thing to do.

"It's been pretty crazy to bring it back here and share it with the community," O'Connor said.

"Our family's motto has always been it takes a village to get someone to this level and then win so share it with everyone.  To see the smiles on young kids faces that's sort of what it's all about."

LONG ROAD TO THE NHL

O'Connor's path to the NHL was a different one. He was never drafted into the NHL.  Instead he played three seasons at the University of Denver and then signed on with the Avalanche as a free agent in 2019-20.

O'Connor's story is all about perseverance and determination and never giving up on your dream.  His advice to kids is if you want it enough keep pushing.

"Sometimes the dream can look unrealistic at times when you're a young kid and face adversity but I think it's good for everyone to just stick to what they (love to) do," he said.  "Have fun and be a good teammate and a good person and if you do all of those things then good things are bound to happen.  So that's the message for any young kid out there who's trying to make this their reality I guess."

O'Connor loved sharing the Stanley Cup with the fans on Wednesday and they came out in full force to get a glimpse of it.  Following an on-ice ceremony, fans lined up to have their picture taken with O'Connor and the Cup.

Finn Rowan and his friend Logan Bailey were fortunate enough to be the first in line.  Rowan says it's as moment he'll remember forever. 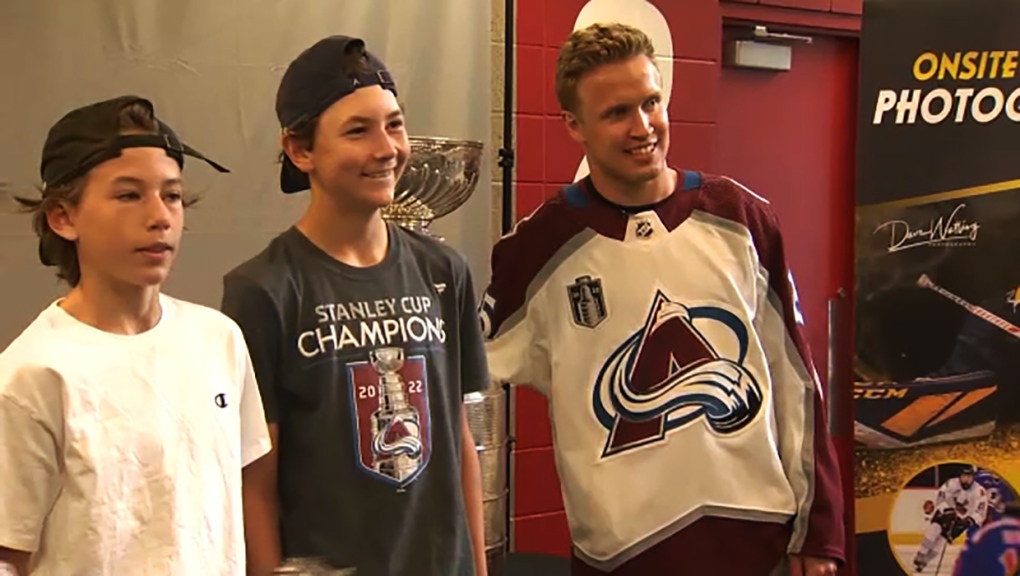 Finn Rowan and his friend Logan Bailey were fortunate enough to be the first in line.

"I mean it's pretty cool.  It’s not everyday you get to see the Stanley Cup so it's really cool."

It's also cool for Logan O'Connor to be able to spend his own day with the Cup.  He says he has to pinch himself every time he realizes he's a Stanley Cup champ.

"Definitely it still doesn't feel like sometimes that this is happening," he said.

"You know all of my hopes and dreams coming true and being in Calgary with the Stanley Cup in the community, it's still hard to think about it at times and wrap my head around it."

Cale Makar gets the Stanley Cup on Thursday and part of the itinerary is to take it to the place where he grew up playing hockey, the Crowchild Twin Arenas.