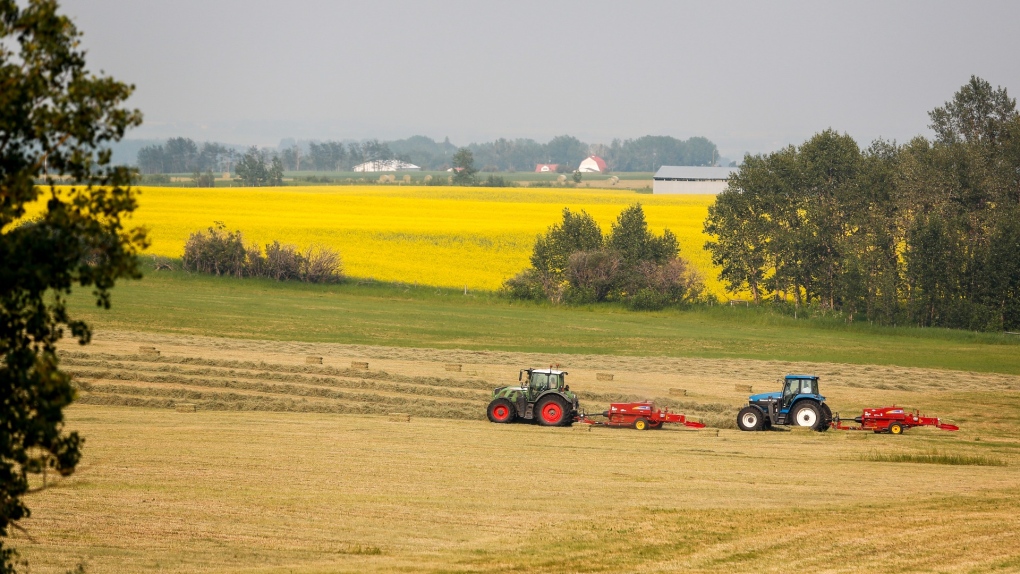 Farmers bale a hay crop with a canola field in the background as a haze of wildfire smoke hangs in the air near Cremona, Alta., Friday, July 16, 2021.THE CANADIAN PRESS/Jeff McIntosh
CALGARY -

Farmers in the Maritimes are pitching in to help their drought-stricken prairie counterparts facing a "devastating" situation.

On his farm in the Annapolis valley north of Halifax on Tuesday, Tim Marsh was busy baling hay that will ship out later this week, destined for struggling ranchers in the West.

"If the weather holds and I could harvest all that I think I've got, it could be 500 or even 1,000 round bales that could go," Marsh said. "At the end of the day, we're all farmers, and we're all in this industry together. If there's an opportunity to help each other out, then we need to take it."

Marsh, who is also president of the Nova Scotia Federation of Agriculture, is just one of a group of East Coast farmers participating in Hay West. The initiative aims to ship surplus hay from the Maritimes, where crop conditions are good, to drought-ravaged Western Canada.

Months of extreme heat and little rain has left crops withering in fields across the Prairie provinces and into western Ontario. In B.C., farmers have also been affected by wildfires and heavy smoke. In the worst-affected areas of the country, conditions are so bad that ranchers are running out of feed for their livestock.

"We're burning through our pastures a lot quicker than we want to right now," said Callum Sears, president of the Western Stock Growers Association. "With other droughts we've experienced, you can get through them, because it's localized. You can bring in feed from other parts of the province. But this is completely widespread. It defies transportation logistics."

Sears said as pastures dry up and feed costs skyrocket, some ranchers are being forced to make tough choices. Without enough food to get their animals through the winter, many are selling off portions of their herd. Others will exit the industry entirely, Sears said.

"A lot of guys are just going to say, 'to heck with it,'" he said. "We're going to lose a lot of producers, and a lot of cows out of the Western Canadian cow herd."

Seventeen million pounds of feed, or about 10,000 square and round bales, are ready to be shipped out via the Hay West project, said Keith Currie, vice-president of the Canadian Federation of Agriculture. More will likely become available as harvest progresses.

The cost of the Hay West program will be covered by private donations as well as government support dollars that have recently been made available for agricultural producers. Earlier this month, for example, the federal government pledged up to $500 million for drought-affected farmers through AgriRecovery, a federal-provincial disaster relief program.

"This isn't just going to be a one-time thing. This is going to have to be an effort that continues," Currie said. "Farmers and ranchers are looking at an entire life's worth of equity go down the drain in two or three months. And it's devastating."

The drought crisis is spurring calls for increased mental health supports for agriculture producers. In Alberta - where scores of communities have already declared states of agricultural disaster and this week's rainfall is considered too little too late - advocates are calling on the government to fund the creation of a 24/7 mental health hotline for farmers.

"As farmers, we have a lot of pride in what we do," said Tory Campbell, who farms in Lethbridge County in southern Alberta and wants the province to set up a mental health help line similar to Saskatchewan's Farm Stress Line.

"When we see a crop fail or our feedstocks fail, we see those failures as a reflection on us," Campbell said. "We see it as though we've failed. And that hurts. It physically and mentally hurts us to see these crops wither and die and suffer."

This report by The Canadian Press was first published Aug. 18, 2021.