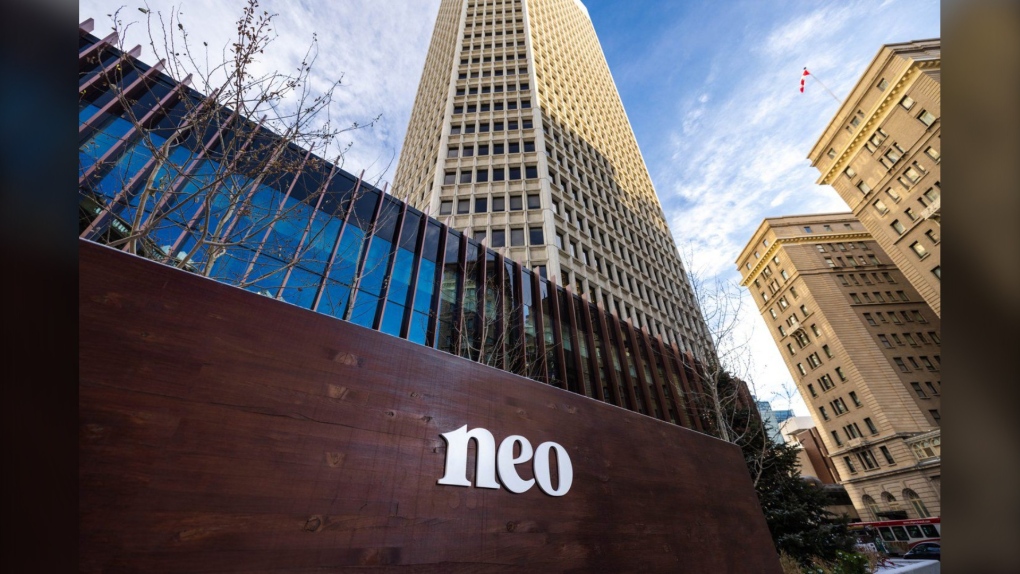 The Neo Financial office building is shown in Calgary in a company handout photo. (THE CANADIAN PRESS/HO-Neo Financial)
CALGARY -

Calgary's tech community can boast another "unicorn" with fintech company Neo Financial's close of a funding round that values the startup at more than $1 billion.

Neo Financial — which was founded in 2019 by Andrew Chau and Jeff Adamson, co-founders of food delivery app Skip the Dishes, as well as Kris Read — announced Thursday that it has raised $185 million in a series C fundraising round featuring New York-based Valar Ventures as Neo's lead investor.

Paul Lee — a partner at San Francisco-based Tribe Capital, which participated in the funding round — confirmed in an interview that Neo Financial's latest fundraise is based on a current valuation of more than $1 billion.

That makes the Calgary company one of only a handful of Alberta-based tech startups that can claim coveted "unicorn" status. (The term is used to emphasize the rarity of reaching that level of valuation in the tech startup world).

"We spend a lot of time working with a special subset of companies that hit the benchmarks right out of the rails, and Neo fits that picture," Lee said. "The numbers speak for themselves, with Neo."

The series C round brings the amount of total venture capital funding raised by Neo Financial in the past three years to almost $300 million. In addition to Valar Ventures and Tribe Capital, other participants in the series C round include Altos Ventures, Blank Ventures, Gaingels, Maple VC, and Knollwood Advisory.

Neo Financial's aim is to build new user-friendly banking technology and products. The company says one million customers are already using its product line, which includes the Neo Credit Card, a cash-back credit card issued by ATB Financial and backed by the MasterCard network, as well as the Neo high-interest savings account provided by Concentra Bank.

The company also offers "Neo Invest" — which it claims is Canada's first actively managed, fully digital investment vehicle — and has plans to offer a new mortgage product before the end of the year.

“The pace at which this team releases new products and grows its customer base is among the fastest we have seen in our careers," said Andrew McCormack, a founding partner of Valar Ventures, in a release.

Chau said in an interview that the banking industry has so far lagged behind other industries when it comes to developing consumer-friendly, easy-to-use technological innovations for its customers.

He said choosing to found the company in Calgary, away from traditional banking headquarters like Toronto and New York, was a conscious choice.

"For us, we’ve always been trying to go against the grain, to truly reimagine financial institutions," Chau said. "And the best way to do that is to avoid that groupthink and have a fresh new perspective.”

Neo Financial's employee head count has swelled to 650 people, and the company is actively recruiting for more than 100 positions in Calgary and Winnipeg.

The company occupies about 10,000 square metres of office space in downtown Calgary, including 5,600 in converted retail space on the fourth floor of the city's historic Hudson's Bay building.

Alberta has seen a boom in the growth of its tech sector in recent years as the province works to diversify its oil and gas-based economy.

According to the Canadian Venture Capital and Private Equity Association, the province broke its own all-time record for venture capital investment in 2021, with total deal value of $561 million and a 64 per cent increase in total deal count.

This report by The Canadian Press was first published May 5, 2022.