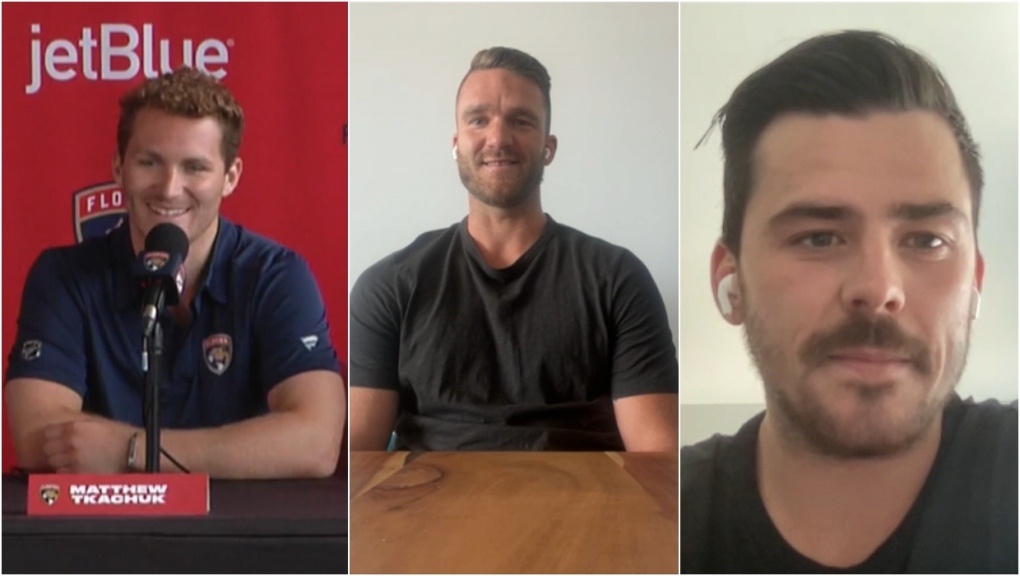 Two of the newest members of the Calgary Flames spoke to media on Monday following a Friday night trade that saw Matthew Tkachuk acquired by the Florida Panthers.

Tkachuk was shipped off with a 2025 conditional fourth round pick for forward Jonathan Huberdeau – who notched 115 points for the Panthers last season, defenseman Mackenzie Weegar – who had  a career year with 44 points, 21-year-old forward Cole Scwindt and a 2025 conditional first-round draft pick.

Both Huberdeau and Weegar said Monday they were stunned by the deal.

"It was a big shock for me and my family," said Huberdeau.

"Going through the weekend we kind of had to talk about everything. It's part of life. Now we're just going to go forward, and I'm excited to be a Flame."

For Weegar, he says the timing of the trade was surprising.

"I guess 11 o'clock at night on a Friday was a little unexpected," he said.

"We got drafted there, we got a lot of emotional ties, there are a lot of good buddies, and they treat us well. (So it’s) a little emotional."

Although its been a little over 48 hours, both players have already seen the excitement in the city.

"The Flames fans have treated us with a lot of good responses, and they're excited to have us and I'm excited to be a Flame," said Weegar.

Both men are coming in expecting to win and not rebuild, and both say they are looking forward to playing in their home country.

Huberdeau and Weegar have one year remaining on their current deals and fans are cautious about whether or not the players plan on staying long term, something both Weegar and Huberdeau say they are open to.

"It's been quick and it's been short so far, but the city and the team, there's no reason not to be open about it," said Weegar.

"I'm looking forward to my agent talking about and seeing what's going on."

MacKenzie Weegar can't wait to get started with the #Flames 🔥 pic.twitter.com/LukBOw3b5T

For Huberdeau, at 29 he says he’d like to envision a future beyond the next season in Calgary, saying he’d like to get to know the city more.

"I've been to the Stampede one time, three or four years ago," said Huberdeau.

"That was the only time I went to Calgary. We played there a lot of times but we know that the fans are passionate so that's pretty cool. It's always loud and people know their stuff."

In a #Flames TV exclusive, Jonathan Huberdeau talks about his whirlwind weekend and his excitement around coming to Calgary. pic.twitter.com/gcTOMuidwm

As for Weegar, other than road trips to Calgary, he has yet to experience the city.

"But other than that, I'm not too familiar with it. The mountains look good."

As for Huberdeau, he’ll have to wrestle the number 11 jersey off veteran forward Mikael Backlund, the longest serving Calgary Flame, if he continues with it – but admits he has already though about what number he could switch to.

Tkachuk, meanwhile, spoke with media in Miami on Monday, gleaming as he looked back on the trade that sent him south.

“If I'm being honest with you, it's been a lot of running around the last few days, but it's unbelievable. Waking up here, you just get that little bit more excitement."

The Panthers say they were made aware that Tkachuk wanted out of Calgary last Wednesday, and that's when Panther General Manager Bill Zito made contact with Treliving to come to some sort of agreement.

"It allows us just to keep a younger core of high-end players together, hopefully to grow together, to win together," said Zito.

Tkachuk says he left his phone in the hotel room while he was on the beach in New Jersey Friday. That’s when his agent, who is also his uncle, said a deal was in the works.

"Somebody grabbed me and said 'call your uncle.' I called him he said ‘e might have something done with Florida,’” said Tkachuk.

"I was the happiest person ever. He (told me not to) tell anybody. I went to my parents' hotel room and told them."

Tkachuk says winning was important to him with his new deal, envisioning the remainder of his career in south Florida, hoping to stay longer once his eight year contract is up.

However, when asked to describe what about the lifestyle he’ll enjoy the most in Florida, he focussed on his footwear.

"It's probably what's on my feet right now: Flip Flops. Yeah, that's we'll just keep that answer there," said Tkachuk with a grin.

While in Calgary, Tkachuk says he despised the Edmonton Oilers in the Battle of Alberta, and hopes to take that hatred into a new rivalry.

"I hate Edmonton, but I hate Tampa more now," he said.

"I'm excited for those games."