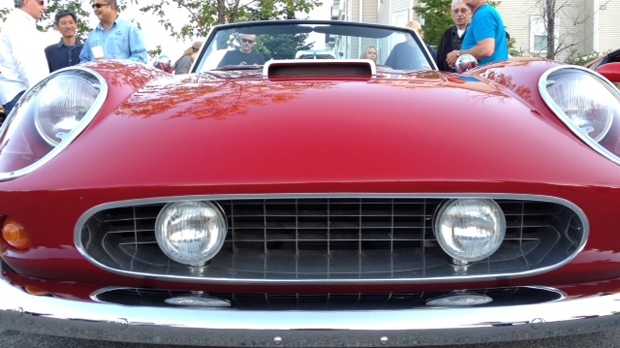 It would take a significant amount of time for Cameron to set back the odometer on his father’s Ferrari following a road trip from Chicago to Calgary.

The famous red 1961 Ferrari 250 GT California Spyder Replica used in the 1986 John Hughes film ‘Ferris Bueller’s Day Off’ will be in Calgary on Thursday, September 12 as part of the Light the Night kick off party in the East Village. The ninth annual Light the Night Walk, which raises funds for the Leukemia and Lymphoma Society of Canada, is scheduled for October.

The car’s appearance will coincide with the showing of the 1986 Matthew Broderick film on the exterior of the Simmons Mattress Building (618 Confluence Way S.E.) in the RiverWalk Plaza.

The characters of Ferris (Matthew Broderick), Cameron (Alan Ruck) and Sloane (Mia Sara) traveled from the Chicago suburbs in the borrowed Ferrari for a day of hijinks in the Windy City.

YYC Mobile Movie, the East Village and the Alberta chapter of the Ferrari Club of America are covering the cost of the movie screening and the displaying of the Ferris Bueller Ferrari.

The movie showing is free but organizers are suggesting moviegoers make a minimum $5 donation to the Leukemia and Lymphoma Society of Calgary.

The Ferrari will be on display on Thursday from 7:00 p.m. until the end of the movie in the RiverWalk Plaza.

The Ferris Bueller’s Day Off screening will begin at 8:30 p.m.