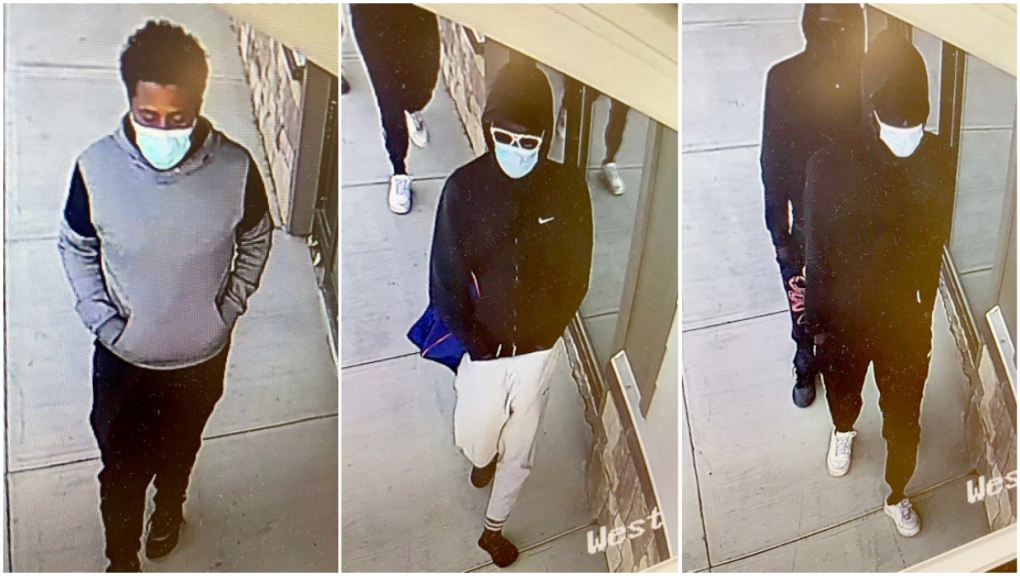 Okotoks RCMP is looking for four suspects involved in a violent robbery at a pharmacy. (RCMP handouts)
CALGARY -

Okotoks RCMP is searching for four suspects involved in a violent robbery at a pharmacy south of Calgary earlier this week.

A 911 call about 10:15 a.m. Monday alerted police to the robbery, which saw three men wearing surgical masks and gloves enter the Pharmasave in the 100 block of Milligan Drive in Oktokoks, and assault the pharmacist, who was alone at the time.

The suspects then fled with an undisclosed amount of cash and narcotics.

Police believed the driver of the getaway vehicle waited outside.

The suspects are described as being dark-skinned, of average height and having slim builds.

The first had black curly hair that was short on sides and longer on top. He was wearing a grey hoodie, dark pants and dark shoes.

The second had on a dark Nike jacket/hoodie, light pants, dark shoes, light rimmed glasses and was carrying a blue bag.

The third also had on a dark jacket/hoodie with dark pants and light shoes.

The fourth was wearing a dark jacket/hoodie, dark pants with detailing on the front, dark shoes and dark glasses.

The vehicle is described as a Chrysler 300, possibly a 2006 model that was a light metallic colour, possibly light green or silver.

RCMP would like to speak with anyone who has dash cam footage in the area of the Tower Hill and Sunset neighbourhoods, as well as Milligan Drive, between 9:45 a.m. and 10:25 a.m. on Monday.