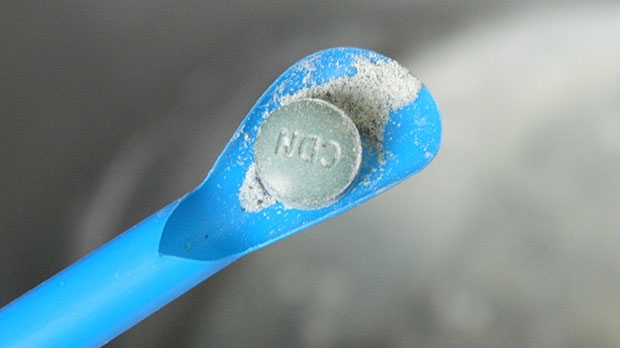 Police in B.C. seized an estimated 500 “fake” Percocet and OxyContin pills from a property on Auburn Crescent in Kelowna. (RCMP)

A Calgary man has been arrested following a multi-jurisdictional investigation into a suspected fentanyl trafficking operation in B.C. and police say it could be linked to the distribution of thousands of the tablets on Calgary streets each month.

Calgary police have been working with a number of other agencies over the past year to uncover the source of fentanyl pills coming into the city.

So far, they have not uncovered any full-scale operations inside the city but say two large operations in Kelowna, B.C. have links to Calgary.

“Identifying the source of fentanyl pill production in Western Canada is extremely important in the ongoing efforts in relation to the health crisis we are facing in Calgary,” said Staff Sergeant Martin Schiavetta of the Calgary Police Service. “The drug trade crosses many jurisdictions making inter-agency cooperation invaluable.”

Back in December, border service agents alerted RCMP in B.C. about the interception of a package from overseas that contained a piece of pharmaceutical equipment.

Police say the package was destined for a West Kelowna address and that the recipient was known to them.

The investigation was expanded and on March 2, Kelowna RCMP executed search warrants on a commercial property and a rural location.

Police seized the following items during raids on the two properties:

Police believe this drug operation may be responsible for shipping as many as 100,000 fentanyl tablets per month to the Calgary area.

The man from Calgary is expected to appear in a Kelowna court on Thursday, June 9, 2016.

In total, RCMP have located three commercial-grade pill presses in the Kelowna area in the past five months.

(Two commercial grade pill presses were located, one of which was coated in green powder suspected to be fentanyl)