Rally to show support, solidarity for Ukraine held in Lethbridge

Rally to show support, solidarity for Ukraine held in Lethbridge

A few hundred people gathered on the steps of city hall on Saturday to show their support and solidarity for Ukraine. Flags, signs and chants could be heard and seen.

Lead organizer of the rally, Misha Pereverza, says he is pleased with the turnout. Pereverza’s wife’s parents, two brothers and six sisters are overseas right now. He says holding a rally was a way to show support.

Those gathered outside city hall say their worried for the safety of their loved ones back home in Ukraine.

Devon Hargreaves has family in Ukraine and says he thought it was crucial to attend the rally.

“By holding rallies like we are today, it's showing a strong support of solidarity, it's supporting what the steps our government has taken to sanction Russia and Putin. I hope that it gets back to our family and friends in the Ukraine and sends a strong message that the rest of the world is watching. We are there and we do support them,” said Hargreaves.

The Russian invasion of Ukraine is impacting Ukrainians living in southern Alberta. Pereverza says, for some people, it’s nearly impossible for them to connect with loved ones.

“Trying to gathering information from all around Ukraine, from east, south, west, north, from everywhere, people are scared, people are very scared,” said Pereverza. 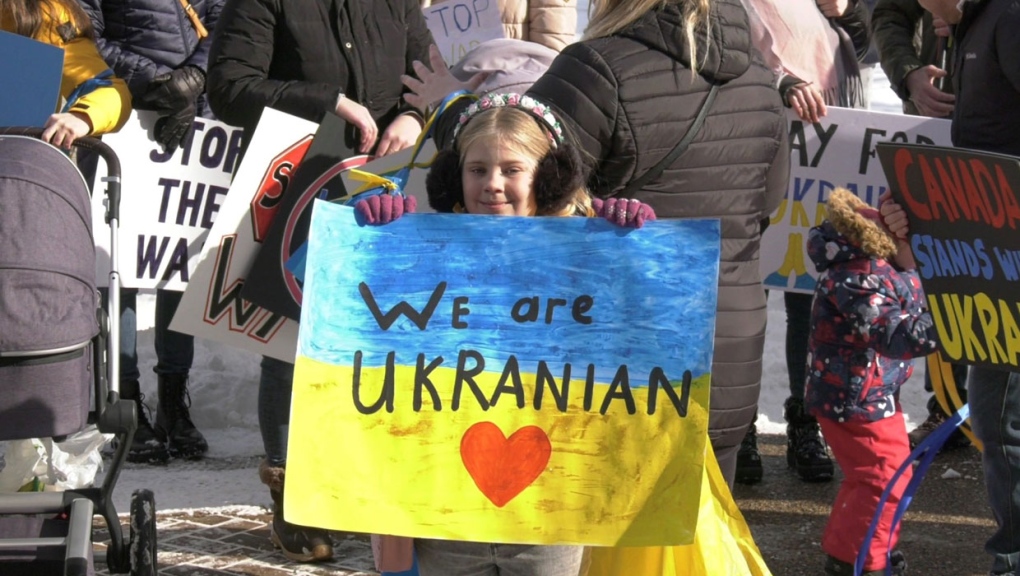 Tom Frankish, who visited Ukraine back in 2019, has friends that are directly being affected by the crisis.

“These are my homies,” said Frankish, while holding up a group photo on his cell phone. “They’ve all been conscripted to fight in the war.”

“It's hard to sit here on the other side of the world while your friends are in harm’s way and I think to myself, what can I do to help?” said Frankish.

Frankish says he took photos of Saturday’s rally and sent them to his friends as a way to show there are people all around the world supporting them. Frankish says he has been in contact with his friends, but says it's unnerving not knowing what may happen next.

“Ukraine is the whole world away, but even to young fellas like me, it still affects us,” said Frankish.

On Friday, the City of Lethbridge raised a Ukraine flag outside city hall to show its support.