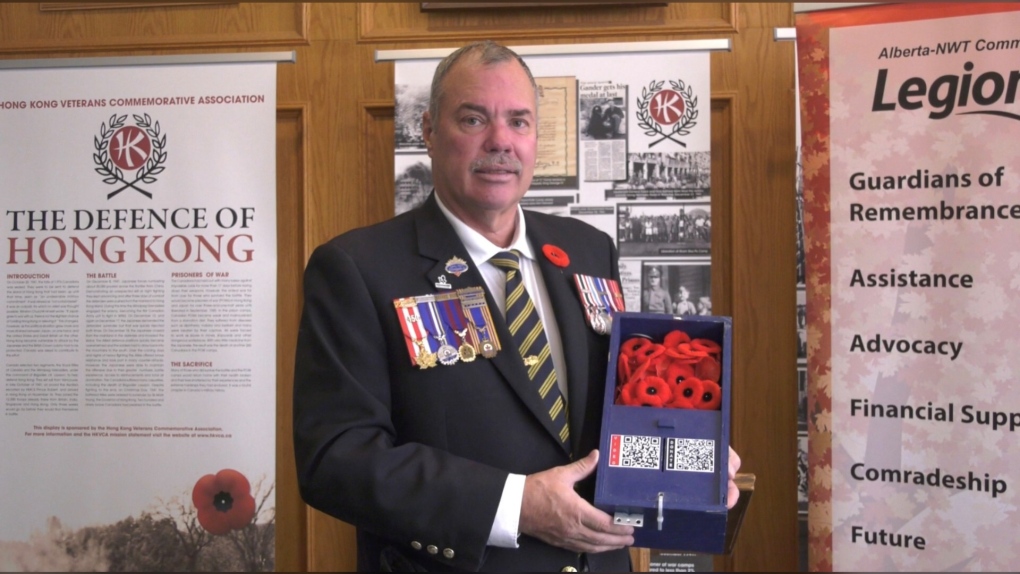 Glenn Miller of the Lethbridge Legion General Stewart Branch No. 4. says the goal for this year's poppy campaign is $90,000.
LETHBRIDGE, Alta. -

Remembrance Day is two weeks way and the Royal Canadian Legion in Lethbridge is getting ready for the start of its poppy campaign.

It’s also finishing up with the final touches on all the upcoming Veterans Week events.

Poppies will be seen around town starting Friday.

"It's important to wear a poppy," said Glenn Miller of the Lethbridge Legion General Stewart Branch No. 4.

"The symbol of remembrance is the poppy and it's for the sacrifice of those who ultimately paid the price for freedom on behalf of Canada."

"Wearing the poppy means that you are representing our country and representing the veterans that served our country so that we can have freedom and that's very important," added Mary Insley, one of the poppy campaign’s volunteers and a 51-year member of the Ladies Auxiliary for the Royal Canadian Legion.

Some of the poppy boxes in the city will once again include a tap option for donations as they look to raise $90,000.

"Thanks to the generosity of Canadians, we were able to raise that money in the last couple years and that's our goal again this year," said Miller.

That’s not all that’s going on though.

The week leading up to Remembrance Day, starting Nov. 4, is honoured as Veterans Week.

This gives people a chance prior to Remembrance Day to recognize those who have served and those we've lost.

For that week, a stretch of 4 Avenue S. will once again be renamed Veterans Avenue by the city.

"Some communities have Veterans Way year-round. It's a permanent change in the name," Miller told CTV News.

"But in our community, it's just for that one week on Veterans Week. It's important to just have another sense of visibility for veterans to feel appreciated."

Other events during Veterans Week in Lethbridge include a Galt Museum & Archives event on Nov .4 highlighting Indigenous veterans as well as a Veterans Hockey Appreciation Night at the Lethbridge Hurricanes game on Nov. 9.

Special banners have also been put up around town to remember those who served.

These banners were sponsored for $250 each, and feature pictures of our local veterans.

Their bios and history can be found online.

All money raised for Remembrance Day helps support veterans and their families.

"They have to be acknowledged and looked after and there are a lot of veterans," said Insley.

"There are a lot of veterans that need help and I hope that they are getting the help that they need."

Two Remembrance Day ceremonies will be held in Lethbridge on Nov. 11.

One will be at the cenotaph on Veterans Avenue and the other, returning for the first time since the start of the pandemic, will be at Exhibition Park.

For more information on Remembrance Day or Veterans Week events is available on the Legion’s website.