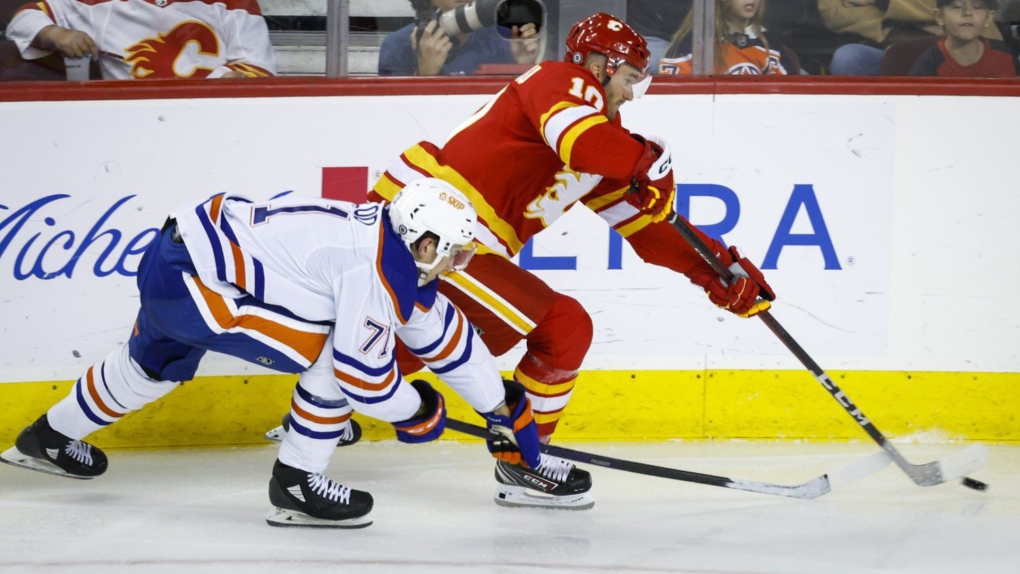 On a night when the spotlight shone on new Calgary Flames stars Nazem Kadri and Jacob Markstrom in their first pre-season appearances, it was journeyman Michael Stone who had the big night.

Stone and Brett Sutter each recorded a goal and an assist to lead Calgary to a 4-0 victory over the Edmonton Oilers on Wednesday.

In camp on a professional tryout, Stone has been with the Flames since being acquired from the Arizona Coyotes at the trade deadline in 2016-17. Since then, he signed a three-year deal that he was eventually bought out from, only to remain in Calgary, signing three consecutive one-year deals.

"This is not a new position for me, so I'm just here, playing like I know how I can play," said the 32-year-old. "Be a good teammate, play well when I get a chance to play and try to make the most of it."

Stone dressed for only 11 regular-season games last season, but shone in an increased role in the playoffs, picking up five points (two goals, three assists) in nine games.

He is competing for a depth role on the blue line where six jobs are already locked up with newcomer Mackenzie Weegar, acquired from the Florida Panthers, Chris Tanev, Rasmus Andersson, Noah Hanifin, Nikita Zadorov, and Oliver Kylington.

"I'm just hanging on, really," Stone said. "Play as long as you can, right? So I'd like to stick around here and I'd like to stay in this organization. So that's why I'm here."

Weegar and Jonathan Huberdeau, with an empty netter, also scored for Calgary, which improved to 3-1-0 through the halfway point of its pre-season schedule. Kadri recorded one assist in his Flames debut. The Oilers fell to 1-2-0.

In his first start, Markstrom made 12 saves in 40 minutes of action before giving way to Dustin Wolf, who made nine stops in the final period to complete the team shutout.

'That's good for him," head coach Darryl Sutter said of his No. 1 goaltender. "Get him a couple periods, work him back in. He was solid. He's worked really hard the whole camp."

The Flames surged in front 2-0 in the second period with Sutter, son of head coach Darryl Sutter, opening the scoring on a rebound at 6:56. At 16:36, Stone showed off his heavy shot, ripping a slapper past Stewart Skinner to double the lead.

"You're just used to summer skates. Now you're really trying to dial in the detail and it's expected, right? You're shaking some rust off," Kadri said. "No one's expecting to be in midseason form in September. We're going to continue to work at it and get better each day."

Kadri made his presence felt in the first period when he got out on the Flames' No. 1 power play with Huberdeau, Elias Lindholm, and Tyler Toffoli up front and the new-look four-forward unit hemmed the puck in the Oilers end for nearly the entire two minutes.

"That's the first time we've we've all been on the ice really at the same time against an opposing team or any sort of pressure, so taking that in consideration, we had some good opportunities and we're only going to get sharper," Kadri said. "We're great players and we're going to make sharp plays but I think it takes a little bit of time to find that chemistry."

Calvin Pickard started in net for the Oilers, finishing with 16 saves on 17 shots in playing the first half. In relief, Skinner allowed two goals on 16 shots.

Notes: The Flames, who have the day off Thursday, still have 58 players in camp — 33 forwards, 19 defencemen, and six goaltenders.

This report by The Canadian Press was first published Sept. 28, 2022.