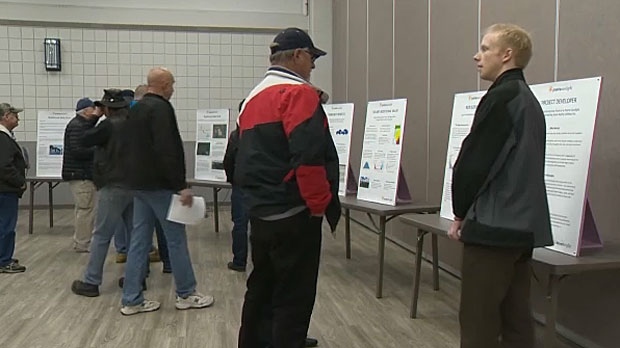 Strathmore residents were able to learn a little bit on Saturday about a new solar energy project to be built just outside their community.

Residents of a community east of Calgary got to learn a bit more about a plan to build a large solar power plant just outside of town.

The solar facility, planned for a 320 acre plot of land next to the Altalink Strathmore substation, has the capacity to generate 40.5 megawatts.

That’s enough to power more than 10,000 Alberta homes each year.

It’s also expected to offset 48,000 tonnes of greenhouse gas emissions and will be tied into the regular electric grid once it’s complete.

Mark Burgert, president of Solarkrafte, the company behind the project, says this will be the ninth solar project for the province.

“We have seven that are fully permitted and have started construction. There’s another one that’s before the [Alberta Utilities Commission] too.”

He says that the meeting was to help answer questions that many residents have about the project.