Within hours of military aggression by Russia, members of Ukrainian diaspora in Calgary are rallying together, calling for Canada and the international community to offer support to the democratic European nation.

The Ukraine flag was flown in front of Calgary's city hall Thursday as a show of solidarity from Mayor Jyoti Gondek and the city administration.

Municipal plaza also became the site of a midday rally.

Tetiana Kravchenko was crying as she spoke with CTV news, waving a cardboard sign in support of Ukraine.

"Its war it is real and people are dying there and basically I have all my family there, they are all there, they cannot leave, they don't want to leave because it's their country," she said.

She moved to Calgaryabout two years ago from a city in eastern Ukraine called Kryvyi -- her mom sister and dad are still in that country.

"I just want to tell them that I love them that I will always be with them, even though I am here my heart is with them," she said.

"I am here to show my solidarity with Ukrainian people, to send the message that ordinary Russians don't support this insanity that our government, our president, has been doing." 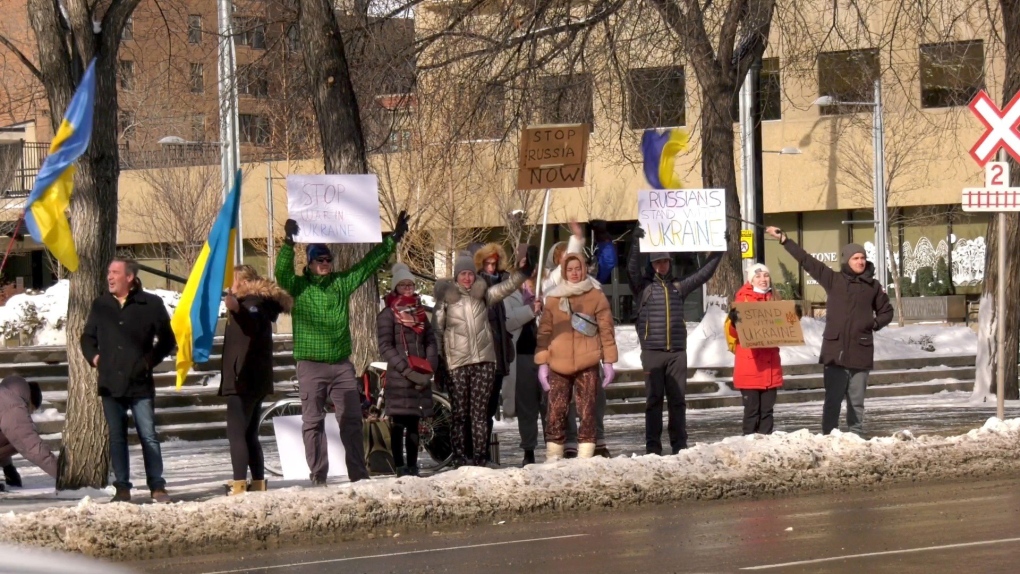 Ukrainian Calgarians gathered along Macleod Trail in support of their homeland, which is under attack by Russia.

Some Ukrainian Calgarians say they haven't slept since multiple locations in Ukraine have been under attack.

His family, including his parents, sister, nephew and brother-in-law, live in Zaporizhzhia, a central city directly north of the Crimean peninsula, which has been annexed by Russia and is one of the reported entry points of invading forces.

His brother-in-law is a member of the Ukrainian army and has since been deployed to defend the county.

"The sense of helplessness is overwhelming being so far away and not being able to help as much."

Leaders with the Ukrainian Canadian Congress also struggled to connect with family in affected regions.

Inna Platonova, president of the Calgary branch, said she has not slept and continues to cry after learning her hometown was bombed.

"I was able to reach (my parents) and we connected and they said don't come (here). You have children," she said.

"We don't want to see you killed. They worry about us while they are there as the town is being bombed."

Platonova had planned to travel to Ukraine, however the airspace has been shut down in reaction to the invasion.

She's helped plan a rally at the Peace Bridge on Thursday at 5 p.m. to offer prayers for Ukraine.

"Ukraine is a very strong nation even though it has a horrible ongoing attack by Russia on its identity, on its territorial integrity," she said. "Ukraine will fight back."

Canada is home to the largest Ukrainian population outside Ukraine, with roughly 345,000 in Alberta.

Premier Jason Kenney announced Wednesday the province is sending $1 million to the Ukrainian Canadian Congress to help deliver humanitarian aid to those affected.

“There is a dimension of Putin’s aggression which has a real relevance to Alberta and that is around energy security,” said Kenney from behind a podium with a sign that read "standing with Ukraine."

Kenney is also calling for a global embargo of all Russian oil and gas products and for Prime Minister Justin Trudeau to pressure the U.S. Government to reinstate the cancelled Keystone XL pipeline.

“Alberta can play a critical role in displacing Russian oil and energy exports which are the basis of the wealth of Putin’s state which finances his military aggression.”

The ministry for jobs, economy and innovation provided an emailed statement to CTV News.

"Alberta's government public commentary about Vladimir Putin’s invasion of Ukraine has nothing to do with our economic interests. Quite simply, Alberta’s energy presents an opportunity to displace crude oil and natural gas imports from Russia – something that contributes billions of dollars per year to Putin’s war machine that is currently oppressing a free people," it read.

"In fact, Russia is the United States’ second largest foreign oil supplier after Canada – upward of 26 million barrels per month."