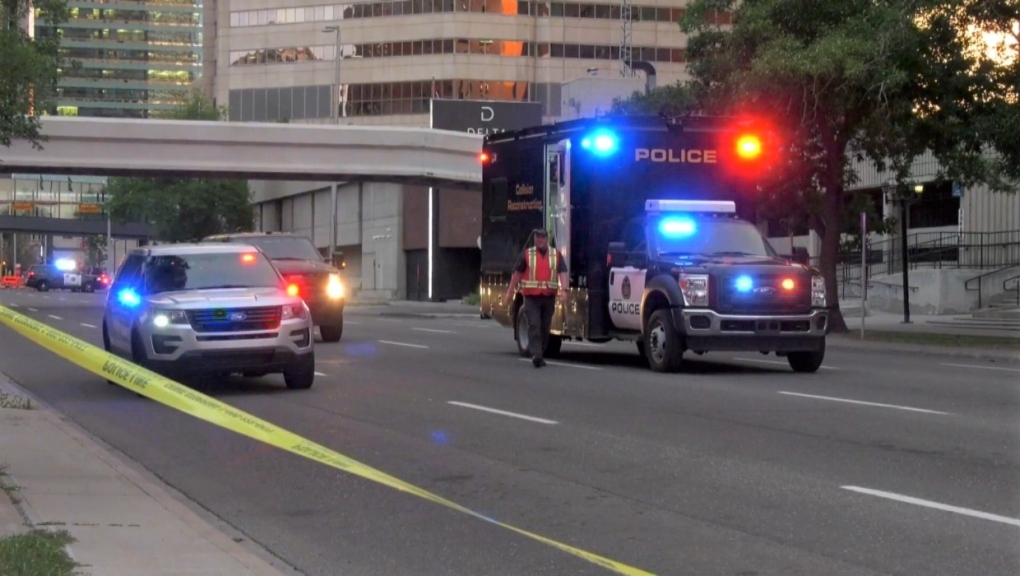 Calgary police investigate a pedestrian hit-and-run collision in the intersection of Fifth Avenue and Macleod Trail S.E. on Tuesday, Aug. 9, 2022.

While officers have successfully located a vehicle believed to been used in a hit-and-run in the downtown core on Tuesday, police say the driver hasn't yet been located.

Emergency crews were called to the intersection of Fifth Avenue and Macleod Trail S.E. at about 3:30 p.m. for reports of a crash.

Police say the victim, a woman in her 20s, was standing at the northwest corner of the intersection waiting to cross when a silver/grey Jeep Gladiator left the far left lane of Fifth Avenue, passed other traffic, ran a red light and entered the intersection as the woman stepped onto the road to cross.

The pedestrian was hit by the front driver’s side of the Jeep, which didn’t stop and continued eastbound along Fifth Avenue.

Investigators noted in a Wednesday news release that the Jeep was travelling at a "high rate of speed."

Paramedics took the pedestrian to hospital with serious, life-threatening injuries. 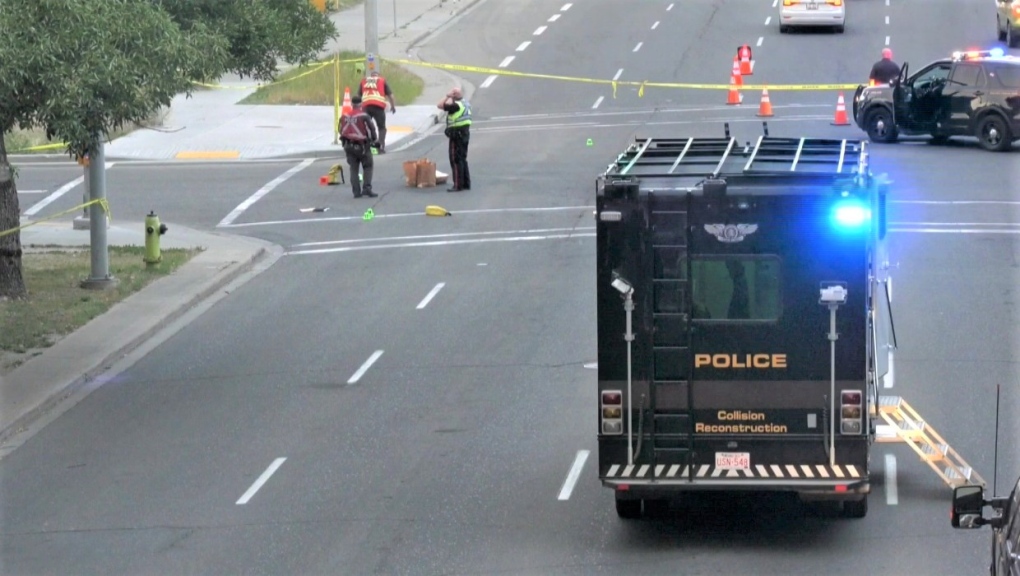 Calgary police investigate a pedestrian hit-and-run collision in the intersection of Fifth Avenue and Macleod Trail S.E. on Tuesday, Aug. 9, 2022.
Police are now working to determine who was behind the wheel of the Jeep when the pedestrian was hit.

Officers found the vehicle a few hours after the crash in a residential parkade in Bridgeland, in the 900 block of Centre Avenue N.E.

Investigators are asking witnesses who have dash cam footage from the downtown core, including the areas of Edmonton Trail and Memorial Drive, at or around 3:30 p.m. on Aug. 9 to send it to police.

Anyone with information about the incident is asked to call the Calgary Police Service's non-emergency line at 403-266-1234 or tips can be submitted anonymously through Crime Stoppers.

Russia to annex more of Ukraine on Friday at the Kremlin

Russia planned to annex more of Ukraine on Friday in an escalation of the seven-month war that was expected to isolate the Kremlin further, draw it more international punishment and bring Ukraine extra military, political and economic support.

A rift has emerged in the Danish royal family following a decision by Queen Margrethe to strip four of her eight grandchildren of their royal titles in order to "future-proof" the monarchy.

What may be the broadest and longest study to date has found Canada's Arctic Ocean is growing more acidic up to four times faster than any other sea on the planet.

Diabetes risk twice as high for those who feel lonely: study

People who feel lonely are twice as likely to develop Type 2 diabetes, according to a new Norwegian study that analyzed data collected from more than 24,000 people over more than 20 years.