A Lethbridge woman who was brutally stabbed during a hostage situation this past summer met with first responders who saved her life.

Kathryn Linder was working inside Lethbridge Legal Guidance on July 14 when a woman came into the office and demanded to speak to a lawyer.

When workers said that person wasn't there, police say the woman went into the washroom only to emerge about 10 minutes later armed with a knife and a firearm.

The suspect forced Linder into a room while three other employees managed to flee.

After police negotiators attempted multiple times to make contact with the suspect, Linder was ordered to turn around and get down on her knees, but she refused.

At that point, the suspect attacked her, stabbing her multiple times in the neck. Officials say it took 56 stitches to mend her wounds.

Linder's neck still bears the scars of the attack. She spoke at an event on Friday where she met with members of Lethbridge's emergency crews that came to her aid on that fateful day.

She says she doesn't remember much other than what she thought of to keep calm in the situation.

"Thinking about the most random things – the holiday I had planned with my daughter, wondering if my co-workers and friends were safe."

Almost as soon as the attack began, Linder says officers burst into the room.

"Now I've got faces but, at the time, just hands and voices," she said.

One of the people who helped Linder that day was firefighter paramedic Tyler Skauge. He says he took over after LPS moved in and arrested the suspect.

"They had taken measures to control Kathryn's bleeding and her stab wounds and they had done a great job, so my partner and I just helped her as quick as we could and LPS drove us to the hospital."

Skauge says he is glad Linder survived and was happy to meet with her in-person.

"It's not every day we get to meet our patients, especially with an outcome like this," he said. "This is an awesome opportunity for us to integrate with LPS and our hospital staff and everyone involved.

"It's nice to actually celebrate a positive outcome and have everyone on board." 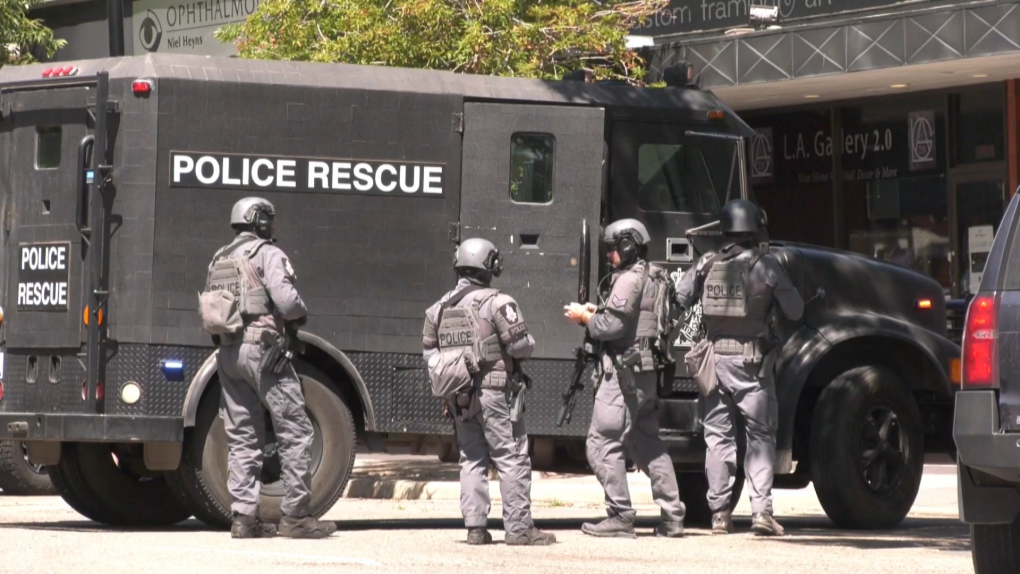 Tactical team members outside of the Lethbridge Legal Guidance office in downtown Lethbridge on July 14 during a hostage situation.

LPS Staff Sgt. Leon Borbandy, who was the incident commander at the scene, called the scene "chaotic" but adds that first responders train for these types of incidents.

"Our officers are well trained and equipped for these situations," he said. "We always prepare for the worst and hope for the best."

Borbandy says everyone has a role and everyone involved did well that day.

It's a "very powerful" feeling to be able to meet with residents who they've helped, he said.

"We're very grateful to be here. Getting to meet Kathryn and seeing her strength is great. Even the support we've gotten from Kathryn, other first responders and the general community.

"Police officers are used to putting themselves in harm's way and do so, pretty much on a daily basis to protect others. To have that effort appreciated and recognized always feels good."

"I'm just so very grateful for everybody that was there," Linder said. "It's just such a wonderful opportunity to be able to say, 'thank you.'"

The alleged attacker, Courtney Louise Shaw, is charged with a number of offences in connection with the incident.

The charges include attempted murder, aggravated assault and separate charges for assault with a weapon – one involving a knife and the other a firearm.

Her next court appearance is on Oct. 13.

(With files from Karsen Marczuk)

Prime Minister Justin Trudeau says everyone in China should be allowed to express themselves amid protests over severe COVID-19 restrictions.