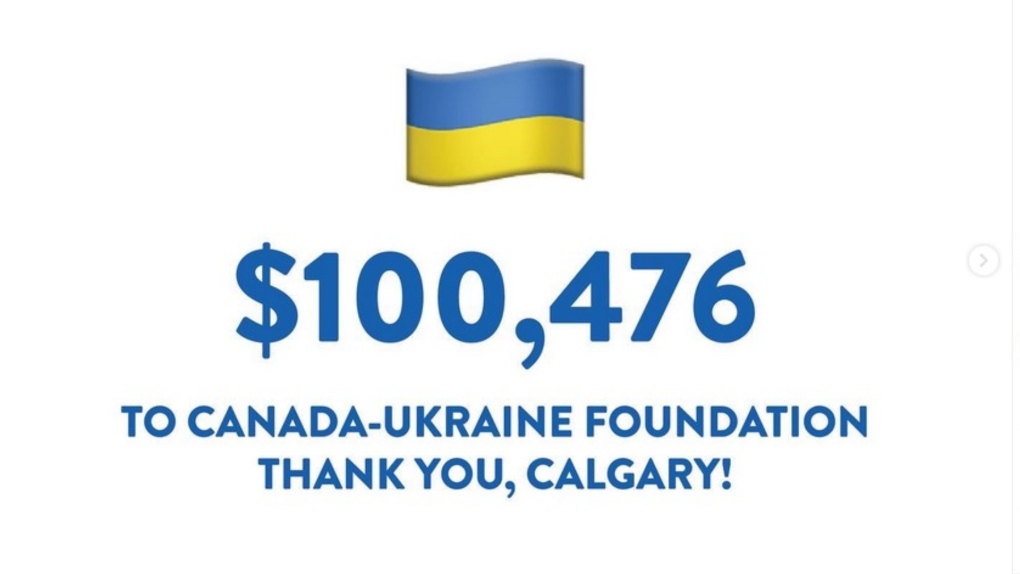 More than $100,000 is being donated to the Canada-Ukraine Foundation by Village Ice Cream. (Instagram/VillageIceCream)

Even though the temperature barely got above freezing on Sunday, there were lineups in front of Village Ice Cream shops across Calgary.

The company committed to donating 100 per cent of sales on March 6 to the Canada-Ukraine Foundation to support efforts in that country against the ongoing Russian invasion.

"It's so much more than we've ever done in sales. We expected to maybe write a cheque for $15,000 or $20,000, so to see Calgarians come out like that, and arguably at the tail-end of winter, it wasn't a super warm day," said owner Billy Friley, adding one customer ordered 106 pints of ice cream.

"To wait in line and support like that … I was stunned.”

Friley grew up in Calgary while his wife, Tetiana, moved to Canada from Ukraine in 2013. Her parents, twin brothers, sister-in-law, and nephew all remain in her home country and one of her brothers is currently fighting with the Ukraine Armed Forces.

“I’ve always known Calgarians are very community minded but I haven’t been that close to it before,” he said. “I hadn’t experienced how incredibly generous Calgarians are and how much they rally behind something that is very important.”

Dozens killed, including children, as mudslide swallows bus on highway in Colombia

A mudslide unleashed by torrential rain buried a bus and affected two other vehicles on a highway central Colombia, killing at least 34 people, authorities said Monday.

'The kind of leader I am': Smith accepts sovereignty act amendments from UCP caucus

Alberta's premier says she is OK with her caucus making changes to the sovereignty act bill she introduced last week, while the NDP argued it would be better to scrap it altogether.

Permanent residents can now apply to join the Canadian Armed Forces, regardless of whether they have been trained by a foreign military.

The unabashedly liberal city of San Francisco became the unlikely proponent of weaponized police robots last week after supervisors approved limited use of the remote-controlled devices, addressing head-on an evolving technology that has become more widely available even if it is rarely deployed to confront suspects.