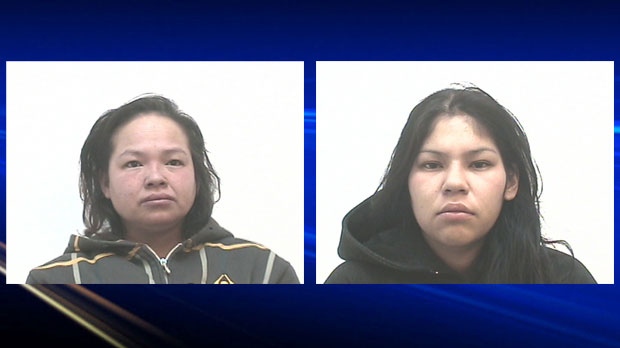 Calgary police are looking for Desjarlais and Drake on warrants.

Calgary police are looking for two women who are wanted on warrants related to the assault, robbery, and intimidation of a Crown witness in an ongoing homicide investigation.

When officers arrived, they found an unconscious man suffering from stab wounds.

John Gordon Walmsley, 42, of Calgary, was taken to hospital in life-threatening condition and later died from his injuries.

A 16-year-old male from Calgary was charged with one count of second-degree murder in connection to Walmsley’s death.

Police say that a Crown witness in the ongoing investigation and court proceedings into Walmsley’s death was assaulted, intimidated and robbed by two women on Monday at about 10:00 p.m on Dermot Baldwin Way S.E.

Kateri Hazel Desjarlais, 33, of Calgary, and Cheyanne Erin Drake, 27, of Calgary, are both wanted on warrants for obstructing justice, intimidation of a justice system participant and robbery.

Desjarlais is described as:

Drake is described as:

"I think it is important that as a witness, especially a witness that's courageous enough to come forward on a homicide investigation and help the homicide investigators and to help this city and this community put killers behind bars, I think that it's important that they should be comfortable to walk wherever they want in this city, free of harassment and intimidation and threats because of what they did, which is being a good citizen," said CPS Inspector Cliff O'Brien of the Major Crimes Unit.

Anyone with information on their whereabouts is asked to call police or Crime Stoppers anonymously using any of the following methods: