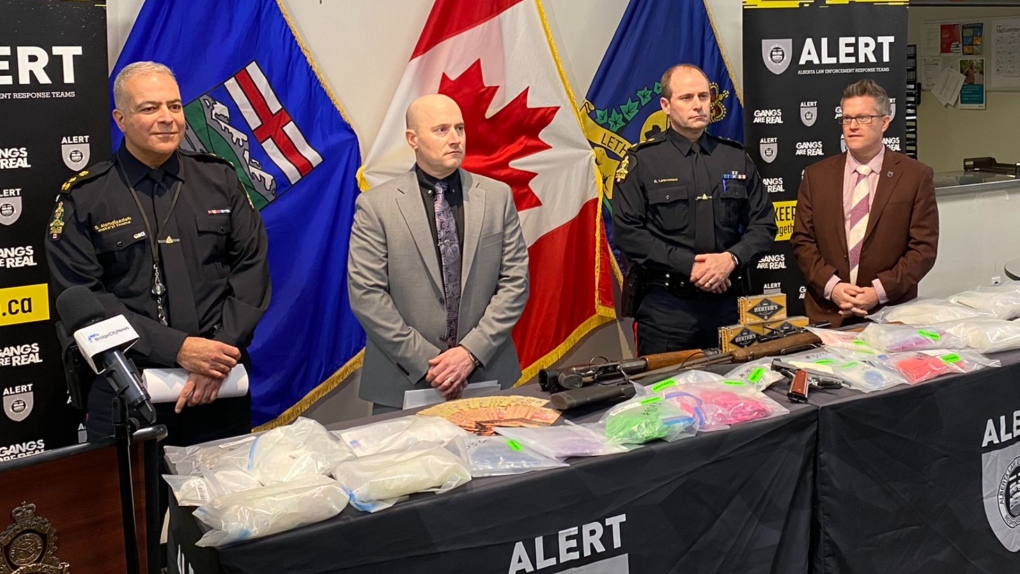 ALERT and Lethbridge Police Service officials stand next to drugs, weapons and cash seized during one of the largest busts in the city's history.

The December search of two properties and two vehicles in Lethbridge led to the seizure of more than $1 million worth of illicit drugs as well as guns, cash and vehicles.

A 34-year-old man faces several charges in connection with the investigation that unearthed significant quantities of methamphetamine, fentanyl, cocaine and ketamine.

Alberta Law Enforcement Response Teams (ALERT) officials say a home in the London Road area and a garage in the community of Winston Churchill, as well as two vehicles, were searched on Dec. 20, 2022, leading to the seizure of:

Rodney has been on ALERT's radar since October when tips emerged regarding his alleged connection to the drug trade.

ALERT says Rodney was previously charged in 2014 in connection with a separate drug trafficking investigation that resulted in a firearms prohibition.

The accused remains in custody ahead of his court appearance scheduled for Thursday.

ALERT and @lethpolice have seized over $1 million worth of drugs and cash in what is believed to be one of the #Lethbridge’s largest. One man has been charged with 20 offences in the case. I’ll have more details on the bust tonight on @CTVLethbridge at 5 p.m. #yql pic.twitter.com/hFzVC7KepS