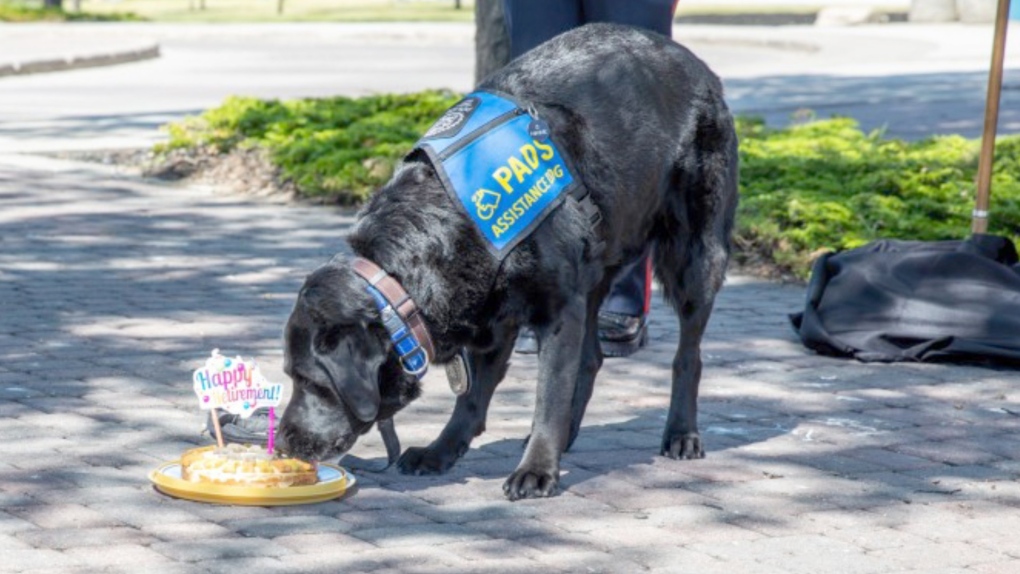 Hawk, the first-ever victim assistance dog in Calgary — and in Canada — hung up his collar and turned in his badge to start a new life of retirement on Friday.

A ceremony was held at the Calgary Police Service headquarters to honour his eight-year career, which began in 2013 after he was raised and trained by the Pacific Assistance Dogs Society (PADS), in Burnaby, B.C.

"Over the course of his career, Hawk was a valuable resource to many of our community partners who work with both children and adults," police said in a release.

Hawk was also an integral part of the Calgary police family.

"He supported victims as they told their story to the media at police headquarters, supported many of our youth programs and even attended difficult debriefings with our own members after traumatic events," read the release.

"However, one of the greatest achievements of Hawk's career remains the successful application put forward by the Crown Prosecution Service, in partnership with us, to have courts recognize victim assistance dogs as an allowable support during witness and victim testimony.

Hawk was the first victim support dog in Canada to be legally recognized, setting a precedent for courtrooms across the country.

"Hawk has had an exceptional career, but what we are celebrating today is really more than just what he contributed," said CPS Supt. Asif Rashid.

The Calgary Humane Society also presented the pooch with a medal.

"We are honored to be a part of Hawk's retirement. He certainly fits the bill as an animal hero and is only the third recipient of this distinction since it was developed in 2013," said Brad Nichols, director of operations.

"For the countless victims of crime whom Hawk has facilitated journeys through the justice system, we congratulate this incredible dog on his accomplishments and retirement."

Hawk is being replaced by two new dogs, Calibri and Webber. He was adopted by his last handler and will now live as a family pet.