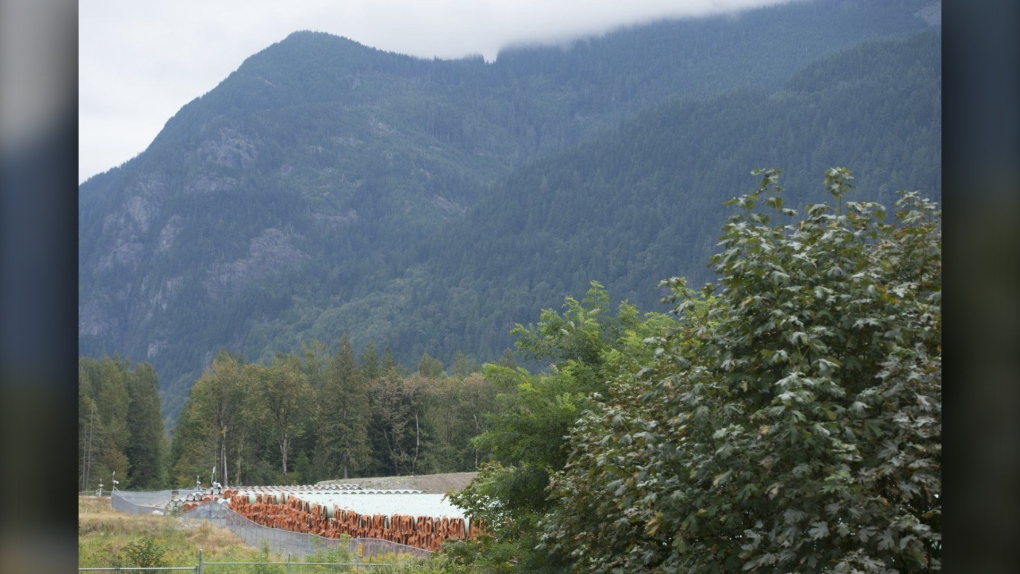 Pipes for the Trans Mountain pipeline project are seen at a storage facility near Hope, B.C., Tuesday, Sept. 1, 2020. (THE CANADIAN PRESS/Jonathan Hayward)
CALGARY -

Indigenous-led groups remain committed to pursuing ownership of the Trans Mountain pipeline, even as cost overruns for the pipeline expansion project soar.

Last month, the federal Crown corporation that owns the pipeline revealed estimated construction costs of the expansion have ballooned by 70 per cent to $21.4 billion, up from an earlier estimate of $12.6 billion.

Trans Mountain Corp. also pushed back the estimated completion date of the project from sometime this year to the third quarter of 2023.

In an email Monday, Trans Mountain Corp. confirmed that due to existing contractual agreements with shippers, only 20 to 25 per cent of the increased capital costs can be passed on to oil companies in the form of increased tolls.

That means that about $7 billion in cost overruns must be absorbed by Trans Mountain itself, ultimately eroding the project's returns.

But escalating costs aren't deterring Indigenous-led initiatives like Nesika Services, a non-profit organization that is working to help Indigenous communities along the pipeline's route acquire a stake in Trans Mountain.

"It means obviously the entire pie for the project is smaller," said Nesika Services executive director Paul Poscente, in an interview. "But we’ve done some modelling based on the publicly available information, and it’s absolutely still viable."

"We still believe that Canada can sell a portion of this pipeline to Indigenous communities on a commercial basis," Poscente said. "We have been urging Canada to start a negotiation."

Project Reconciliation, another Indigenous-led initiative that is seeking 100 per cent Indigenous ownership of Trans Mountain, recently sent a letter to Prime Minister Justin Trudeau to indicate it is still "ready, willing and able" to purchase the pipeline.

"We’re anxious to sit down and have conversations more formally on that," said Project Reconciliation managing director Stephen Mason.

Still, Mason acknowledged that the new $21.4 billion capital price tag for the project is higher than his group had anticipated.

"We had re-run our financial expectations about four or five months ago, assuming $17 billion," Mason said, adding the ultimate selling price for the pipeline will only be what a prospective buyer is willing to pay, and will therefore reflect the anticipated return on investment.

"Whether it’s us buying this asset or a big pipeline company coming in to buy it ... they’re only going to pay a price that will be supported by the tolls. It has to be supported by a revenue model."

The 1,150 km Trans Mountain pipeline carries 300,000 barrels of oil per day, and is Canada's only pipeline system transporting oil from Alberta to the West Coast.

Trans Mountain was bought by the federal government for $4.5 billion in 2018, after previous owner Kinder Morgan Canada Inc. threatened to scrap the pipeline's planned expansion project in the face of environmentalist opposition.

Last month, Trans Mountain Corp. blamed the surging cost projections for the project on the COVID-19 pandemic and the effects of the November 2021 flooding in British Columbia, as well as project enhancements, increased security costs, route changes to avoid culturally and environmentally sensitive areas, and scheduling pressures related to permitting processes and construction challenges in difficult terrain.

However, she said the federal government still believes the Trans Mountain expansion is a "serious and necessary project" that is in the national interest.

Chinook Pathways, another group seeking an equity stake in the pipeline, did not respond to a request for comment. Chinook is an Indigenous-led partnership formed by Western Indigenous Pipeline Group and its industry partner, Pembina Pipeline Corp.

The federal government has indicated it does not wish to be the long-term owner of Trans Mountain, and intends to launch a divestment process after the expansion project has been "further derisked."

The federal government has also said it is open to Indigenous ownership of the pipeline. It has said next steps toward that objective will be announced later this year.

This report by The Canadian Press was first published March 7, 2022.