When Megan Bolen taught her dog Rogan how to paint just over a year ago, she had no idea how much attention her clever K-9 was about to receive.

"It's very surreal to be talking to people about my painting dog. Like it still doesn't feel real. I'm sending my dog's paintings to Hong Kong. That's very surreal." She said.

Rogan's work may look a bit different from most up-and-coming artists, but considering the fact that he has no thumbs and does all the work with his mouth, his talent is undeniable.

That's why his Instagram is picking up steam, some of his pieces are about to be featured in and art exhibit in Hong Kong and others are currently being auctioned to support Tripawds.

"Sometimes he shocks me by how quickly he picks things up. It's almost like he's a mind reader," said Bolen.

"I feel crazy almost saying that, but it's like, he's so quick to pick things up and he just loves training so much and he's so joyful about it."

Since learning how to paint, all of the proceeds from Rogan's sold pieces have been donated to local charities in southern Alberta.

So far, just shy of $6,000 has been given to animal shelter in and around Medicine Hat thanks to Rogan's artistic gift, but the most recent fundraiser in mind has a more international feel to it.

All the money raised for the Tripawds Foundation goes towards their Kaiserin Care Package which supports cats and dogs who have been diagnosed with cancer. 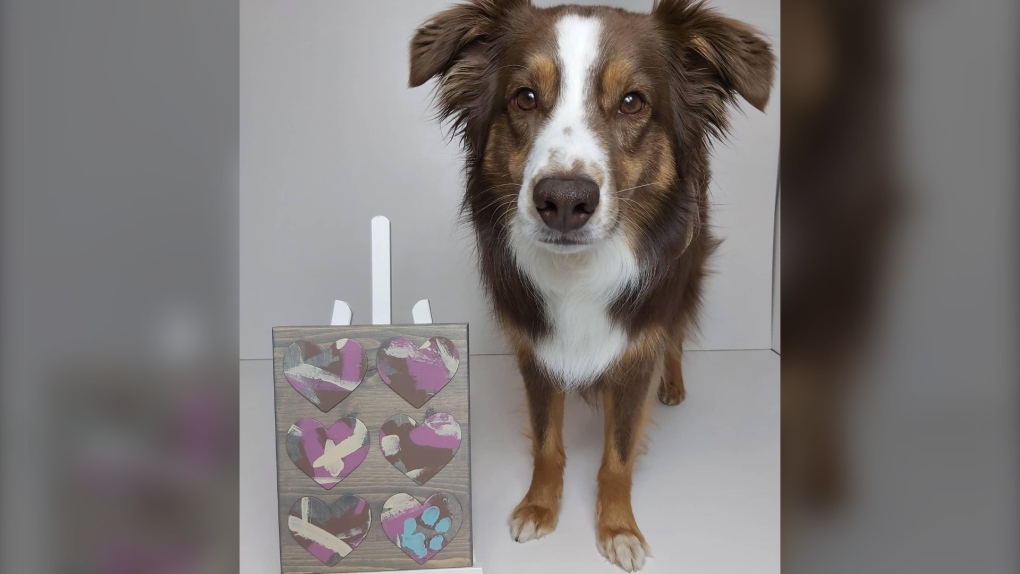 There are 16 paintings up for auction from puppy Picassos from all around the world.

"These paintings are coming from the U.K., all across Canada, one from Australia, one from Scotland and in the United States." Said Tripawds co-founder Jim Nelson.

The company is based in Texas, but the idea for the dog art fundraiser actually came from one of the organization's Canadian members.

"She's actually in London, Ontario. So, it started with a Canadian and we're just really happy to go ahead and move forward with this. We're so excited." Said co-founder Rene Agredano.

For Rogan and Megan, being able to contribute to the fundraiser is a rewarding feeling.

It's been a whirlwind of social media attention and interviews with news organizations since Rogan first picked up his customized, jaw-fitted paint brush, but Megan wouldn't have it any other way.

"I'm a crazy dog lady. That's all I want to do is talk about my dog so, you know, I'm living the dream!" Said Bolen.

The Tripawds art auction is on until June 13th and the hope for the funds raised to cover the expense of the Kaiserin Care Packages for at least another 12 months.