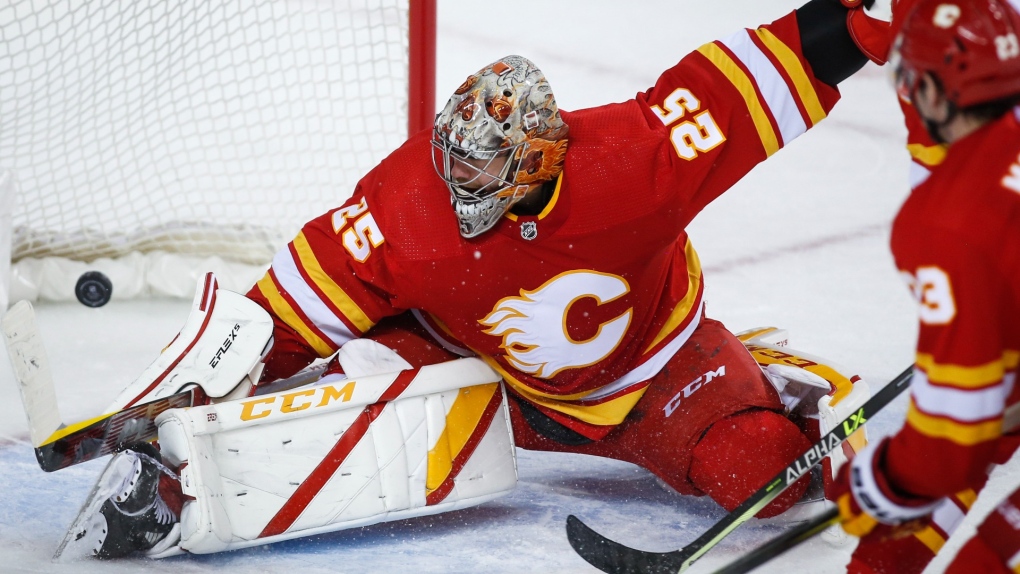 Calgary Flames goalie Jacob Markstrom lets in the winning goal during overtime of an NHL hockey game against the Anaheim Ducks, in Calgary on Oct. 18, 2021. (Jeff McIntosh/The Canadian Press)
CALGARY -

Outshot by a large margin and chasing throughout the game, the Anaheim Ducks rallied for a 3-2 overtime win over the host Calgary Flames on Monday.

"Troy kind of did all the work, made a great fake, great curl and drag and then slipped it through the guy, right on my tape back door," Drysdale said.

It was the first OT winner for the 19-year-old from Toronto.

"Awesome," Drysdale declared. "It's obviously really exciting, especially being back here in Canada. It's nice, even though the fans were cheering against us, the energy was real good. It's nice to have fans back in the building."

Cam Fowler and Rickard Rakell also scored for the Ducks (2-1-0), who won the first of four straight road games.

Anaheim goaltender John Gibson made 41 saves for the win after sitting out Friday's loss to Minnesota with a lower-body injury.

"To come out with this win, not only just being my first goal in overtime, this was a really big win for our group and it'll set us up nicely moving forward into this road trip," Drysdale said.

Blake Coleman scored in his Flames debut and Elias Lindholm also had a goal for Calgary (0-1-1).

Calgary lost a second straight game putting 40-plus shots on the opposition's net. The Flames generated 47 in a 5-2 season-opening loss in Edmonton on Saturday.

"We have 40 shots in both games, but we've got to get someone in front of the net," Gaudreau said. "We've got to take the goalie's eyes away and find a way to score some greasy goals."

With 15,174 in attendance, Scotiabank Saddledome wasn't full for the Flames' first regular-season game with spectators since March 8, 2020.

The COVID-19 pandemic had the Flames playing in front of empty seats in the 19,289-seat arena until the pre-season.

Rakell on a give and go with Adam Henrique pulled Anaheim even at 12:55 of the third period.

Henrique fed an unchecked Rakell in the high slot for the latter to whip the puck over Markstrom's right pad.

Calgary led 2-1 at 3:52 of the second period on Lindholm's second in as many games.

He collected a cross-ice pass from Gaudreau and threaded a shot between Gibson's pads from the faceoff dot.

Fowler pulled the visitors even with a power-play goal at 15:54 of the opening period. He wristed a drop pass from Kevin Shattenkirk by Markstrom's right pad.

Anaheim had the man advantage because Matthew Tkachuk chopped an airborne puck down while standing on Calgary's bench, and was called for interference.

Coleman scored the season's first goal at the Saddledome at 7:43. Gaudreau tapped the puck up to the winger in the neutral zone. Coleman generated a shooting lane with his speed and fired a wrist shot under Gibson's left arm.

Winner of back-to-back Stanley Cups with the Tampa Bay Lightning, Coleman signed a six-year, US$29.4-million contract with Calgary in the off-season.

The Flames start a five-game road trip Thursday in Detroit.

This report by The Canadian Press was first published Oct. 18, 2021.