As more cities globally begin to ban leaf blowers, one southwest resident says he would support a growing petition to ban that type of equipment in Calgary as well because of environmental and excessive noise concerns.

Jürgen Kraus said he recorded videos at 1:00 a.m. Tuesday morning of crews working to clear the grounds of a school parking lot within steps from his home in Richmond/Knob Hill

"It excruciatingly ear-drilling. It causes me headache," said Kraus.

He said crews from Pro Property Services have been contracted by the Calgary Arts Academy charter school to clear the snow in the winter and for one-time work to clear gravel in the spring.

That work began in the evening and extended into the wee hours of the morning, disturbing his sleep.

"I heard some loud aggressive leaf blower noise and I was wondering because there's no snow right now and there's also no leaves," said Kraus.

He said in February he asked the facility manager at the school to ensure crews don't use the fuel-powered machines until after 7 a.m., but says he feels ignored.

Calgary Arts Academy superintendent Dale Erickson told CTV News the school is aware of Kraus' complaint, and he's also is confused why the annual gravel-clearing work would happen past midnight. He said  he is looking into it further.

Calgary's noise bylaws states that residents cannot use power tools including leaf blowers -- between 10 p.m. and 7 a.m. from Monday through Saturday, shortening the window to 9:a.m. on Sundays and holidays.

"At a minimum the school should restrict their snow removal and whatever noise they want to make into legal hours, and be a good neighbour to us. To follow the bylaws, yes, but also (out of) common courtesy," said Kraus

"There are many factors to noise complaints and following noise bylaws. Our company is pushing for quieter options for evening work so that home owners aren’t disturbed. Challenges companies face are the lack of efficient electric equipment options on the market for commercial use."

It continued, "The company will absolutely be investigating this to ensure we aren’t in violation of any noise bylaws as we'll recommend the public to familiarize themselves with the city bylaws themselves." 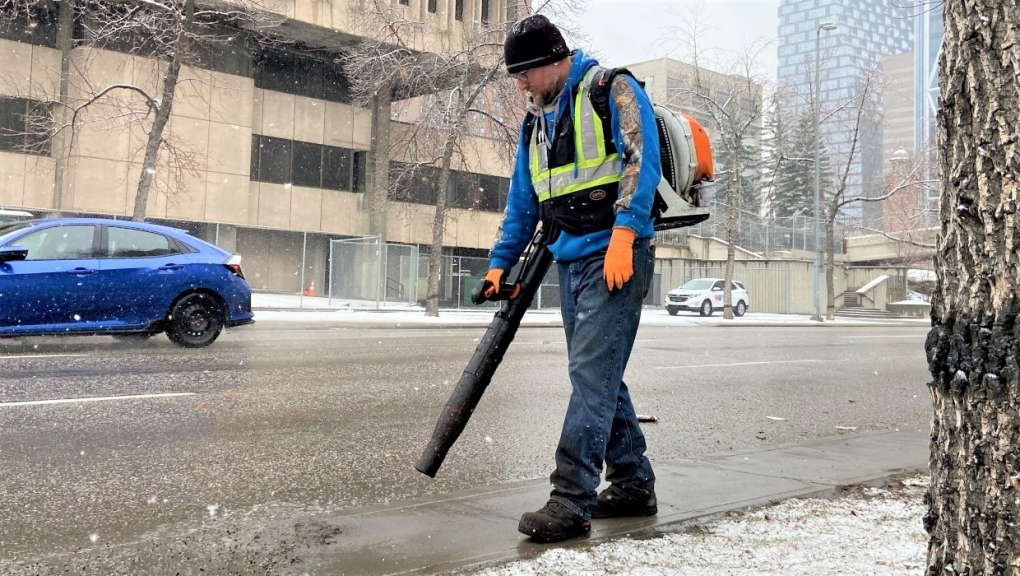 An online petition is calling on the City of Calgary to ban the use of gas-powered leaf blowers.

However some Calgary advocacy groups believe there are quieter and more eco-friendly options for snow and lawn care.

Project Calgary launched a petition in April calling for the City of Calgary to ban leaf blowers, citing noise and air pollution concerns, which has reached 2,700 signatures out of its goal of 3,000.

"When it comes to what they spew out of them, the air quality problems they create can lead to all sorts of respiratory problems, like asthma and high blood pressure," said Peter Oliver, volunteer with the group.

He said phasing out gas-powered leaf blowers is plausible because of the variety of alternatives like rakes, shovels, and battery-powered equipment.

"Which are far quieter and don't come with the air pollution that the gas powered versions do. It's one of these climate change initiatives that we can do (right away)," said Oliver.

Some cities in the U.S. have issued a similar ban, and California is exploring banning the sale of gas-powered leaf blowers and lawn mowers by 2024 in a move to curb carbon emissions.

The California Air Resource Board had compared the pollution created by using a gas-powered leaf blower for an hour to driving 1,770 kilometres.

The city of Vancouver will ban gas powered landscape maintenance tools by 2024.

Kraus said he would support a ban in this city.

There are no current plans by Calgary city councillors to bring this to the council agenda in the near term.