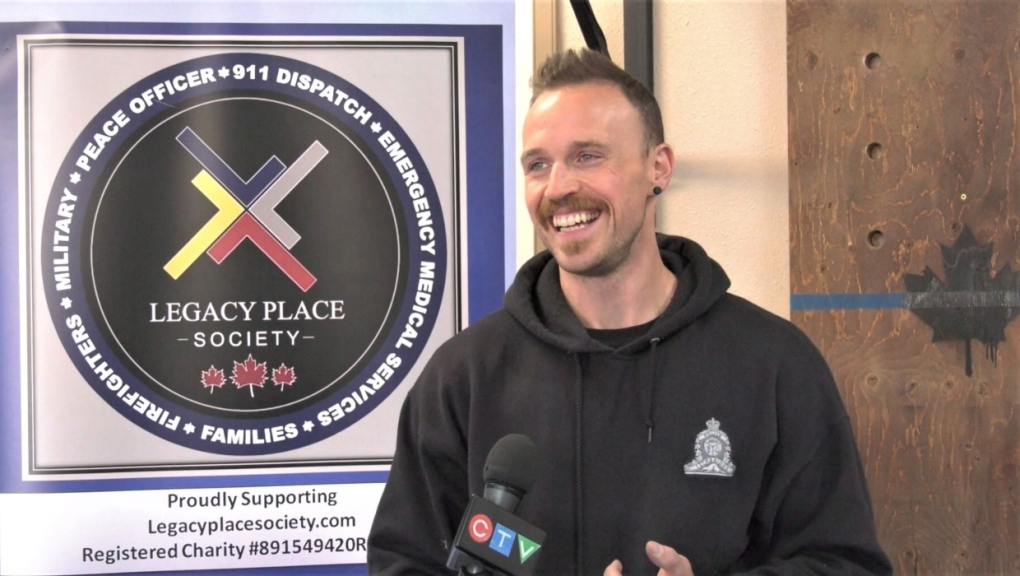 A Lethbridge police officer said he was overwhelmed by the support he received during a weekend fundraising event in which he attempted to do 24-hours of pull-ups.

Const. Terry Fieguth started his challenge on Saturday in an effort to raise money and awareness for mental health services.

To prepare for the big day, Fieguth started training in March and did over 124,000 pull ups in the seven months leading up to Oct.12.

"I knew going into it that it was going to be a battle, and it was a battle," Fieguth told CTV News.

"I'm still standing here, obviously, but it was a physically and mentally gruelling challenge."The police dog handler and fitness enthusiast said he hoped to raise $2,000 for Legacy Place Society, an organization that provides support for first responders and military families.

The police dog handler and fitness enthusiast said he hoped to raise $2,000 for Legacy Place Society, an organization that provides support for first responders and military families.

By the time the clock ticked down on the challenge, Fieguth had raised more than $8,000 for the non-profit.

However, the current total has now surpassed $20,000, thanks to a generous contribution from an anonymous donor.

“I’m very happy with the way things turned out,” Fieguth said in a news release. “I’ve had people I’d never met in my life reach out through social media and cheer me on, which was pretty cool to see."

Fieguth said his plan was to do 100 pull-ups every 10 minutes, followed by a five minute break.

He began at 10 a.m. on Saturday, but by 2 a.m. on Sunday he said his hands gave up, his shoulder gave in, and he was forced to end the challenge.

“Obviously I would have loved to keep going and pushed through for the entire 24 hours, but the body, it said it finally had enough,” Fieguth said.

As for the number of pull-ups he was able to complete, Fieguth had set 4,030 as his goal, a feat accomplished by former Navy Seal David Goggins, but he managed to surpass that and do 4,080.

Fieguth had friends and family visiting him throughout the day to cheer him on.

He says he couldn't have done it with out his wife Tianna, who said she was proud of what Fieguth accomplished.

"He is the most dedicated and motivated human I know," Tianna said. "He was able to prove that in the last 24 hours."

With this fitness challenge behind him, Fieguth says he's looking forward to some much needed rest time before whatever inspires him next.

"I'm sure something will strike soon," he said.

"A few of the guys were already talking about push up records, so maybe we'll start pushing instead of pulling."

Donations to Legacy Place Society in Fieguth's name will still be accepted until Oct. 17 through Facebook.