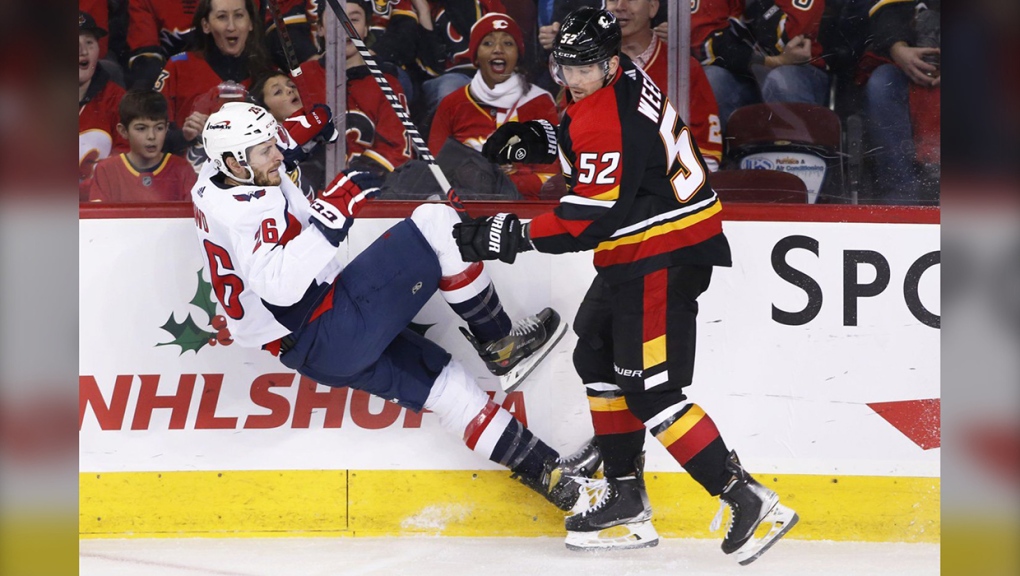 Guilty of not taking advantage of their scoring opportunities of late, the Calgary Flames changed that on Saturday.

Andrew Mangiapane scored twice and Adam Ruzicka had a goal and two assists to lead the Flames to a 5-2 victory over the Washington Capitals.

Calgary fell 2-1 to Montreal on Thursday despite sending 46 shots on goal. On Nov. 25, Washington won 3-0 despite the Flames taking 32 shots at Darcy Kuemper.

This time around, Calgary sent the puck into the top corner or just inside the post on four of its five goals.

“Kuemper won the Stanley Cup last year for good reason,” said Flames coach Darryl Sutter. “Shoot everything this high (gesturing with his arms out to his side), it's like a bear catching a fish. That's where we hit him last game, in the belly and in the hands, and tonight the goals we scored were high.”

With the Flames nursing a 2-1 lead late in the third, Ruzicka and Mangiapane put the game out of reach scoring 55 seconds apart.

At 13:39, Mikael Backlund's pass sprung Ruzicka on a breakaway and he snapped a shot over Charlie Lindgren's glove on a breakaway.

Mangiapane's second of the night came with a one-timer off a drop pass from Dillon Dube. Nazem Kadri snapped a seven-game pointless skid by also assisting on the play.

They can't contain the grain 😏 pic.twitter.com/3zOlc7L0lA

“Sometimes, pucks just don't go in for whatever reason. Maybe you run into a hot goalie or something like that,” said Mangiapane. “Like tonight, when you get your opportunities, you really gotta bear down and finish them.”

With three goals in his last three outings after opening the season with just three goals in the first 21 games, Mangiapane hopes he's found his offensive groove, like Ruzicka has since becoming a regular in the lineup.

“That's a big part of being a good player in this league — is playing with confidence," Mangiapane said. "And when you're a young guy coming up, you just got to go out there, work hard and build up that confidence and good things will happen.

“Even myself right now, still keep building off your previous games and you keep gaining confidence.”

Ruzicka has 13 points (six goals, seven assists) in 14 games after being scratched in 10 of the season's first 11 games.

“It's an awesome feeling,” said the 23-year-old Slovakian. “You want to play, you want to be on the lineup every single night and you want to contribute, which is happening right now and I'm fortunate enough to be out there.”

Blake Coleman and Elias Lindholm, into an empty net, also scored for Calgary (11-10-3) while Backlund chipped in with three assists.

With Jacob Markstrom struggling, Dan Vladar made his fourth start in the last six games and was solid in making 27 stops. He improved to 3-4-1.

Lindgren, who took over for the injured Kuemper with 3:51 left in the second period fell to 2-3-2. He gave up two goals on nine shots after Kuemper stopped 24-of 26 shots.

"I think you've got to take a couple steps back and look at the desperation we have to play with in order to get pucks through, get secondary chances, get interior plays,” said Caps' winger Garnet Hathaway.

Tied 1-1 after the first, the Flames regained their lead 1:35 into the second when Mangiapane took a pass from Backlund and wired a wrist shot from about 25 feet out over Kuemper's shoulder.

The top corner was also the formula for Coleman's opening goal at 18:03 of the first period.

"I thought the first period was OK. The second period we didn't generate anything. I thought at times we shot ourselves in the foot a little bit turning the puck over,” said Washington coach Peter Laviolette. “When we did get it down into the offensive zone, too many one-versus-two, one-versus-three. Not enough two-versus-one, three-versus-one in the battles.”

Already missing six players due to injury, Washington lost two more in the second period. Halfway through, defenceman Martin Fehervary was shaken up when he was hit along the corner boards by Milan Lucic. Shortly after, Kuemper pulled himself from the game after a skirmish with Tyler Toffoli.

Washington left-winger Alex Ovechkin played in career game No. 1,300. He is the 14th player all-time to reach that number with the same team. He's also one game away from tying Sergei Gonchar (1,301) for second-most career games in the NHL by a Russian. Alex Kovalev (1,316) is the leader.

Flames: Return to action on Monday when the Arizona Coyotes visit the Saddledome.

This report by The Canadian Press was first published Dec. 3, 2022.