Nicole White has been panhandling for seven years.

In that time, the 44-year-old has developed a strategy.

"I'm pretty much at it 24 hours a day," she said, "I will start at a drive-thru, like McDonald's at 5 or 6 a.m. Sometimes I'll sleep there and get to cars as they come through all night. But I have four or five different spots I rotate through."

She says she's developed instincts on the best places to ask for change – low income areas are tough because people don't have money to spare.

She prefers higher income neighbourhoods but not too high. She says it's better when she meets people who've been through lean times themselves since they're more likely to give.

It’s also better ask for money at busy intersections than outside businesses, White has found.

"If you're in front of a store, you get asked to leave quickly," she said. "If you go inside, security follows you until you leave. Even if you go to the bathroom. Outside, you get a lot of comments, you get a lot of nasty looks and I find sitting in front of stores gives people more opportunity to...voice their opinion to you, whereas if I'm working with traffic I only deal with for the duration of the traffic light."

These days, White is being joined by more people on the street.

She says she's seen a dramatic spike in panhandlers competing for the same donors.

"There is a hundred more times people panning," she said. "There used to be a handful, now you're tripping over them everywhere you go."

White says she's trying to stay ahead of the competition, "panning" in spots others haven't found yet

"I've always gone further north from downtown, as the downtown people come out, I keep going further north to stay head of them," she said.

"There used to be a lot more courtesy between panners – if someone was on a spot you go to religiously then you come, they leave – that's your spot right? It's not like that anymore, there are so many people now it’s bad.

“Even if you're panning, someone will step right inside of you, put their arm in the car window and take money. Lately, I've had people run up and rip money out of people's hands as they try to hand it to me, quite often they'll take the money and run with it." 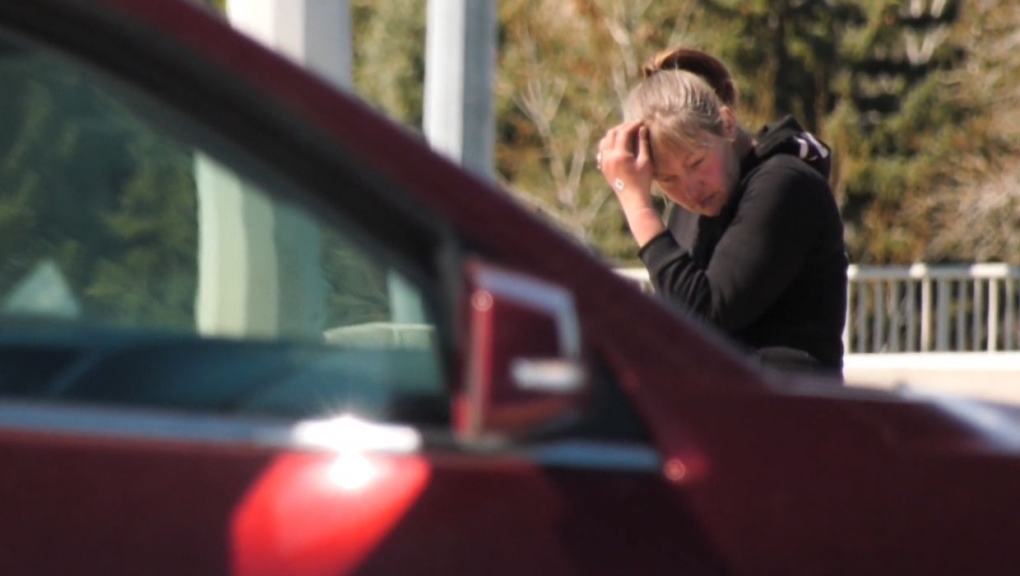 Nicole White says she makes between $10 and $100 per day and panhandling is what she does to survive until the next time she can see her children.

White says she has no doubt what's led to the increase – drug addiction.

Her last three partners died of drug overdoses, including her most recent, who never woke up after they went to sleep in their tent, pitched just a few metres away from the busy city thoroughfare where they panhandled together.

She says drug access is fuelling the number of people soliciting money on the street.

"Sometimes people will pan close to a dealer so as soon as they get money, they can buy something. It's also why people are so close to the CTrain lines, they can go wherever the dealers are."

White says for now, she has no plans to stop panhandling – she just wants to survive.

She has several children, ranging in age from eight to 24 – the oldest are on their own, the youngest ones living with their father. White's forbidden from seeing them.

'I NEVER ASK FOR MONEY'

White doesn't usually share her panhandle spots but does with Daryl Anderson because, she says, he's a friend.

Anderson has been on the street for two years.

He worked as a mechanic for 17 years before he and his wife were in a car accident.

His mom died a few months later, as did his sister.

He spends about 8 hours a day panhandling , holding a cardboard sign, walking by cars waiting at an off-ramp stoplight.

Instead, he approaches people only if they roll down their window for him.

Anderson says he generally makes between $40 and 50 a day.

"Mostly just to eat,and hopefully enough to put a roof over your head for the night, " he said, "I can usually find a room through Airbnb or Kijiji."

"There are some places you can go where people are more generous but there are people that exploit it, take advantage," said Anderson. "They'll just keep going and going and going get hundreds of dollar in the pocket. I'm not really into that, it feels like I'm lying to people in a way."

Anderson has also seen the dramatic increasing in panhandling – he says some of the people beside him on the streets have recently lost their jobs and often their homes.

He can relate – he spent nearly a year looking for work when he got to Calgary three years ago but eventually gave up.

As soon as people find out you're homeless, they don't want to hire you," he said. "I don't understand that. I mean, I could build a house from the ground up. I don't get it."

Anderson says his first goal is to get a roof over his head.

His next goal is a job.

In the meantime, he'll keep panhandling, despite the increased competition on the street and the occasional insult from passersby.

"You get the odd person who is really rude," he said. "I hear the comment 'get a job', I hear that a lot, I always kind of have a laugh about it... like, obviously that was my first goal."

Anderson isn't giving up on that goal – he hopes there will soon be one less panhandler on Calgary's streets – because he hopes he will soon be part of the work force instead.