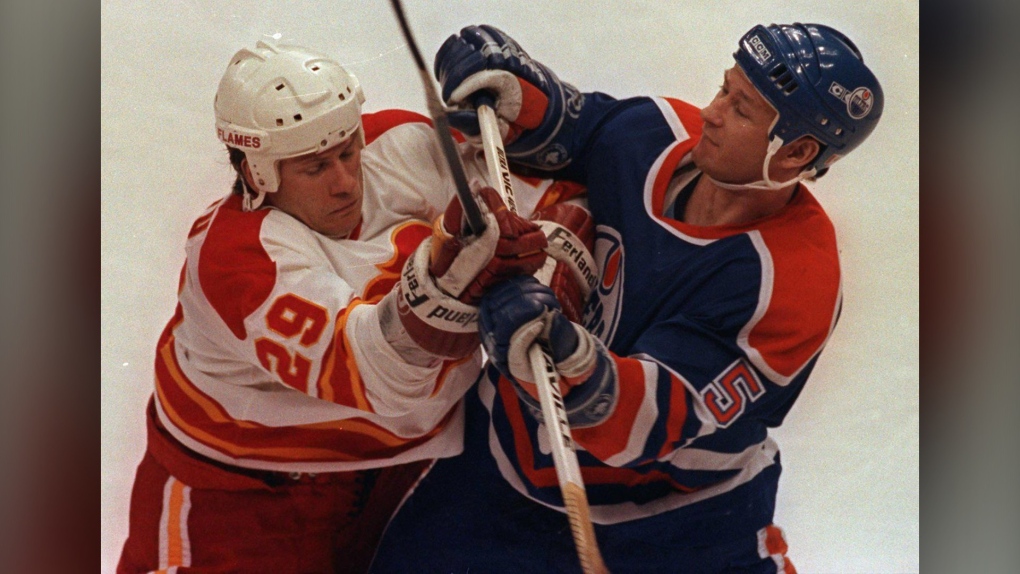 Esa Tikkanen could feel his team's season, and perhaps the Edmonton Oilers' dynasty, starting to slip away.

He also knew a 3-0 deficit — even in the knife-edged Battle of Alberta — didn't mean much at the time.

The Oilers found themselves in that big hole early in Game 7 against the Calgary Flames on April 16, 1991, at what was then known as the Olympic Saddledome.

"He goes, 'Well guys, we have to start to play hockey if we want to keep going,'" Tikkanen recalled in a phone interview from his native Finland. "The next shift I scored a big goal — slapshot from blue line on Mike Vernon in the five-hole.

"That was the turning point."

The Oilers would tie the score in the second, including Tikkanen's second of the night, and then grab the lead in the third only to have the Flames knot it up late.

Just under seven minutes into overtime, with a province holding its collective breath, Tikkanen dashed down the right side on a hopeful 1-on-4 rush before firing a shot that ticked off Calgary defenceman Frantisek Musil and sailed past Vernon to cap the teams' fifth playoff meeting in nine years.

"A great battle," Tikkanen said. "One of greatest series in hockey history."

The provincial rivals, however, would both fall on hard times for long stretches and not meet again in the post-season for more than three decades — a showdown that started this week and once again has the attention of the hockey world.

But not for all of the same reasons.

Now it's largely about the speed and skill of Connor McDavid, Leon Draisaitl, Johnny Gaudreau and Matthew Tkachuk.

But back in 1991, it was the heated matchup of two teams — two champions — taking and receiving walloping blows that almost defy logic when examined under the sport's current lens.

That Battle of Alberta in particular was mean, nasty and downright violent.

"The most physical, aggressive, emotional series I've ever been part of," said Mark Lamb, another Edmonton forward at the time. "Just unbelievable how intense it was."

Craig Muni, who patrolled the Oilers blue line, said while YouTube video of various incidents 31 years later is shocking to some — hobbled Edmonton captain Mark Messier could barely get off the bench to celebrate Tikkanen's Game 7 heroics — the players didn't think twice.

"Just the way the game was," Muni said. "You didn't look at it or think of it any different.

"It was the cost if you wanted to play."

The clubs had combined to win the Stanley Cup the four previous years heading into the 1991 series — Edmonton in 1987, 1988 and 1990, while Calgary hoisted hockey's holy grail in 1989 — but there was a feeling time wasn't on the side of either battered powerhouse.

"To be honest," Oilers defenceman Kevin Lowe said, "both teams were on fumes."

Edmonton jumped out to a 3-1 lead in the series before the Flames roared back with two straight victories, including Theo Fleury's dramatic Game 6 winner in OT and his memorable celebration, to send the drama back to Calgary for the decider.

"When Theo came in our barn and scored in overtime and did a full lap on his knees and jumped and so on, as a player you're saying ... I'm not going to say it," recalled Martin Gelinas, an Oilers forward at the time and now a Flames development coach. "It was physical, it was hard.

Vernon likened the action to a "war" in that seven-game set.

"A lot of stuff going on behind the referee's back," he said. "A lot of dirty, chippy stuff.

Muni said it didn't take long for a kid from Toronto to understand the intensity of the Battle of Alberta — and not just on the ice.

"It was a baptism by fire," he said. "You quickly realize it's not just a rivalry hockey-wise. It's a rivalry between the cities, and the politics ... everything.

"Everybody's on either side of the fence."

Tikkanen said there was no escaping Oilers-Flames chatter.

"They talked about it every minute," he said of fans and media. "Everyone was watching."

Muni heard stories about bars in Red Deer — a city about halfway between Edmonton and Calgary along Highway 2 — taping lines on establishment floors to keep rival fans apart.

But as much as spectators frothed at the mouth for the controlled chaos, Lowe added the on-ice combatants felt differently.

"Fans loved it because it was like watching the gladiators in ancient Rome," he said. "But there was the potential for disappointment and almost the embarrassment if you did lose the series. Luckily we won four and only lost one, but there was a chance you'd lose.

"As much as I agree with people that's some of the greatest hockey and most entertaining hockey ever played, it wasn't necessarily fun being a participant."

Those participants in 1991 included Lowe, Tikkanen, Messier, Glenn Anderson, Petr Kilma and Grant Fuhr for the Oilers, while the Flames — 20 points clear in the regular-season standings and favourites in the series — countered with the likes of Fleury, Vernon, Joe Nieuwendyk, Doug Gilmour, Gary Roberts and Al MacInnis.

"It was just unfathomable to lose to them," Lamb said. "And they felt the same."

"They had some great players, Hall of Fame players, on that team," Muni added of Calgary. "They probably would have won a lot more Stanley Cups if they didn't have to run into our team in the same division."

Edmonton would move on and beat Wayne Gretzky's Los Angeles Kings in the second round in 1991, but were no match for the Minnesota North Stars in the conference final.

It's taken 31 years for the Oilers and Flames to get back on same playoff ice.

There's a feeling the rematch, finally, is coming at the right time. And not just because of the jaw-dropping, mesmerizing talent on display.

"Hard to believe it's here," Lowe said. "It's good for the province's morale. Everybody's coming out of the ether as far as the pandemic's concerned. It seems like the oil and gas industry's turning around.

"It's a good time to be playing this."

- With files from Donna Spencer.

This report by The Canadian Press was first published May 20, 2022.