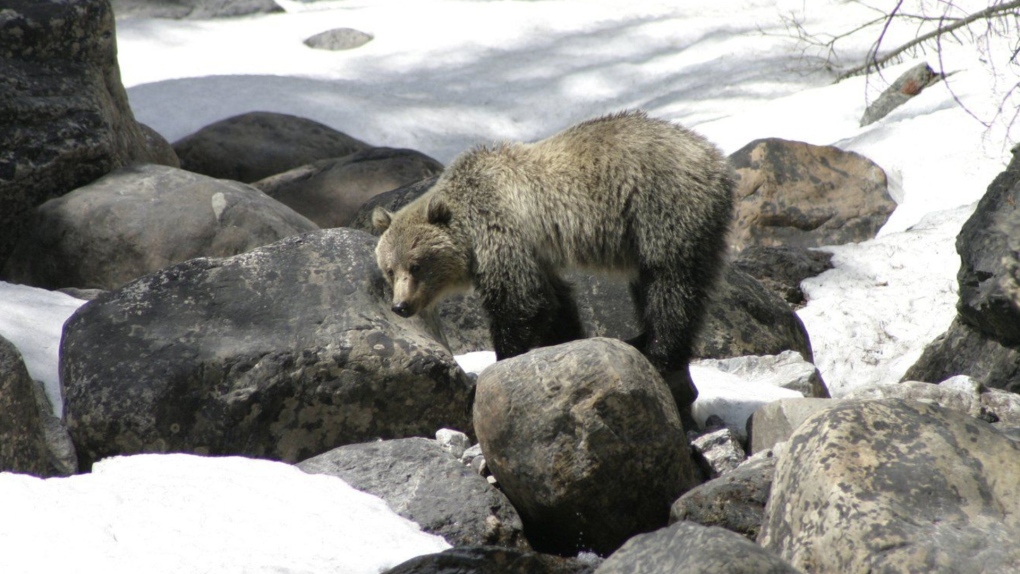 A female grizzly bear stands on a rock in Yoho National Park in this undated photo. The bear was hit and killed on the Trans-Canada Highway on June 7, 2022. (THE CANADIAN PRESS/HO-Sonia Nicholl/Parks Canada)
LAKE LOUISE, Alta. -

Parks Canada is asking motorists to slow down and watch for wildlife after three grizzly bears were struck and killed in Jasper and Yoho national parks earlier this month.

The agency said two bears — a female and a male — died on the Trans-Canada Highway through Yoho National Park in British Columbia on June 7 and June 11.

"We always expect bears to come into the valley bottoms in the spring, because it's the first place to green up," said David Laskin, a wildlife ecologist for Parks Canada in Lake Louise. "We have a lot of dandelions and green vegetation, so the bears usually come down and eat that, then disperse into the backcountry at higher elevations.

"This spring, it's a little delayed because we have a snowpack that is hanging in there. It's keeping the bears low and they are spending more time along the roads, which is putting them at risk for a longer period of time."

The female bear with a cub was hit late Thursday or early Friday morning by a transport truck about five kilometres east of the Jasper townsite. The cub survived and appeared to be doing well Friday, Parks Canada said in a news release last week.

The agency estimates on its website there are about 200 grizzly bears in Banff, Jasper, Yoho and Kootenay national parks. They are listed as a species of special concern under federal legislation.

"The loss of any grizzly bear is one too many," he said, "but a … female of reproductive age is a big hit, because grizzly bears are slow to reproduce and they are relatively rare on the landscape."

Parks Canada reduced the speed limit to 70 km/h from 90 km/h on a six-kilometre stretch of Highway 1 west of Lake Louise, Alta., and east of Field, B.C., in Yoho National Park after the female grizzly was killed. It was further reduced to 50 km/h after the second bear was hit, Laskin said.

"We've had additional speed enforcement in the reduced speed zone," he said. "Both park wardens and RCMP have been issuing speeding tickets and also impounding vehicles for excessive speed."

Laskin said there's also a no-stopping zone in the same stretch of highway.

This report by The Canadian Press was first published June 20, 2022.