Calgary police are searching for a man they believe was involved in a hate-motivated crime Tuesday, one of many being investigated in Alberta in recent weeks.

Just before noon Tuesday, police say a good Samaritan witnessed a man verbally berating a Muslim woman who was wearing a burka and her children at the intersection of 6 Avenue and 8 St S.W.

Police are hoping to speak to the victim who hasn’t filed a report and now searching for a white man, around 50 years old, who was wearing a turquoise-colour shirt and white hat.

Constable Craig Collins, the hate crimes coordinator of the Calgary Police Service says they recognize the lasting emotional impacts these types of events have and are committed to investigating all allegations of hate-motivated incidents.

“There isn’t an increase in hate crimes in Calgary but there is a greater increase in public awareness,” he said. “People are feeling more confident to come forward.”

This is the second high profile incident of this kind in Calgary in the last month where a witness has come forward, something Collins is encouraged by.

“I want to applaud those citizens that do come forward. As a police service we can’t keep every Calgarians safe without the help from our community.”

Police also laid charges against a man last month in what police are calling a hate crime, after a truck driver was recorded yelling profanities, threats and derogatory comments and tore a windshield wiper off a victim’s vehicle.

There have also been a number of incidents in Edmonton, including the discovery of a swastika on a mosque, as well as an attack on a Muslim woman mid-June. 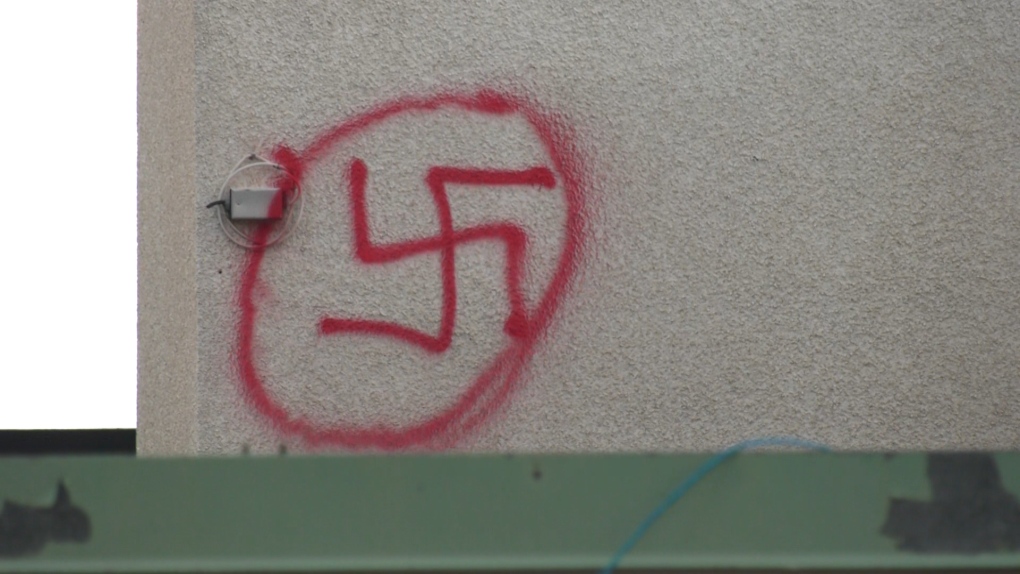 A swastika was found painted on a mosque, it's not clear how long it's been there. Tuesday June 15, 2021 (CTV News Edmonton)

Dr. Pallavi Banerjee is an associate professor in the department of Sociology at the University of Calgary and said Albertans can no longer be surprised by these incidents.

“I’m frustrated and infuriated but I’m not surprised as Canada has a history of hate crimes against Muslims,” she said. “I think we need to stop projecting this innocence and say that we are not a very welcoming nation to minorities, to Indigenous people, and we start there and we correct ourselves instead of expressing shock at these events.”

Banerjee said there is a number of reasons we may be seeing these type of crimes recently, including the pandemic.

“We are at a moment of historic global crisis with the pandemic and historically whenever there is a external factor like the pandemic - which is not external, it’s happening globally - but it is a crisis and it’s effecting people, when it affects people in a way ideologies around white nationalist and white supremacy and racist and racist ideologies show up right?”

Anyone with information on any of these incidents is asked to contact police at 403-266-1234. Anonymous tipsters can contact Crime Stoppers at 1-800-222-8477, online or by using the P3 Tips app available at Apple or the Google Play Store